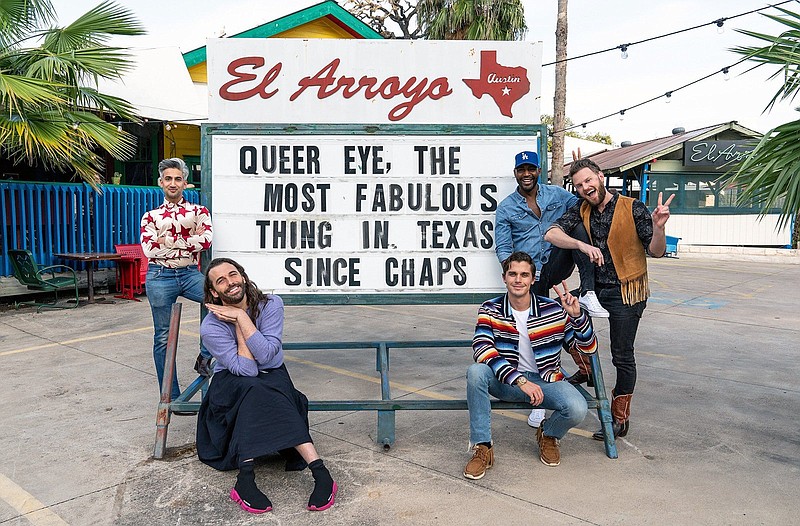 AUSTIN, Texas — They've walked among us for months now. Finally, we'll get to see what happened when the "Queer Eye" team came to town.

When does Season 6 of 'Queer Eye' drop?

The new batch of Austin episodes premiered Friday on Netflix.

When did 'Queer Eye' film in Austin?

Production officially started in March 2020. And, um, you know what happened.

Let's back up. In December 2019, clues started to emerge that the Fab 5 were making their way to Austin. Guests at Van Ness' ACL Live show back then received flyers soliciting nominations for the TV program. The flyers read: "Howdy Texas! Queer Eye is casting in Austin, Texas! Accepting nominations in Austin & Central Texas." Other flyer sightings circulated on social media.

Shortly after, Austin Justice Coalition, a local advocacy group focused on equity issues, said that producers for "Queer Eye" approached its team for help with nominations. The producers were looking "for deserving people, couples, families, friends and co-workers within a 90-minute radius of Austin who could truly benefit from a 'make-better.'"

In March 2020, Netflix finally announced the new Austin-set season, complete with photos of the cast in front the El Arroyo sign. Then, as the pandemic shut down productions across the world, "Queer Eye" had to stop working with just a day left of filming on the first Austin episode, according to Entertainment Weekly.

In February 2021, Berk announced on Twitter that casting had resumed for the show. By April, it looked like production was back in gear in the Texas capital.

"Let's try this again y'all!" the show posted on Instagram. "We're SO EXCITED to step our cowboy boots back in Austin to film 'Queer Eye: Texas!' Can't wait to bring more smiles (and tears) to your faces!"

"I literally had 5 tacos yesterday," Porowski wrote on Instagram, "also 'Queer Eye' is back, y'all!" Brown, France and Berk also posted about it, with Berk also posting Instagram stories from Zilker Park, Lady Bird Lake and South Congress Avenue.

Where did 'Queer Eye' film in Austin?

A trailer posted Dec. 27 to YouTube offered a sneak peek at a few of the crew's filming locations. One is the Broken Spoke, where they apparently took country dancing lessons from Terri White, daughter of the Spoke's late founder, James White.

A social media post from the Other Ones Foundation, a nonprofit focused on helping people experiencing homelessness, revealed that executive director Chris Baker also will appear.

"I spent an incredible, life-changing week with Karamo Brown, Tan France, Jonathan Van Ness, Antoni Porowski and Bobby Berk this summer," Baker wrote. "What a joy not only to learn all about ways to care about myself, but to also spread the word of [the Other Ones Foundation's] mission and vision with the world!"

Did the Fab 5 stay in Austin all this time, and where did they show up?

Good question. When production shut down, some stars stuck around, at least for a little while. Berk was in town for a brief bit. Van Ness posted several pics from Austin on Instagram, and Porowski filmed a quarantine cooking show in the city.

In recent months, we've also seen Van Ness do a surprise standup set at Moontower Comedy Festival, tout a haircare line at Austin Motel, help curate an art show at West Chelsea Contemporary and perform at ACL Live. And Van Ness and his husband regularly post to Instagram from a home in Central Texas filled with their dogs and cats and sporting an impressive home garden.