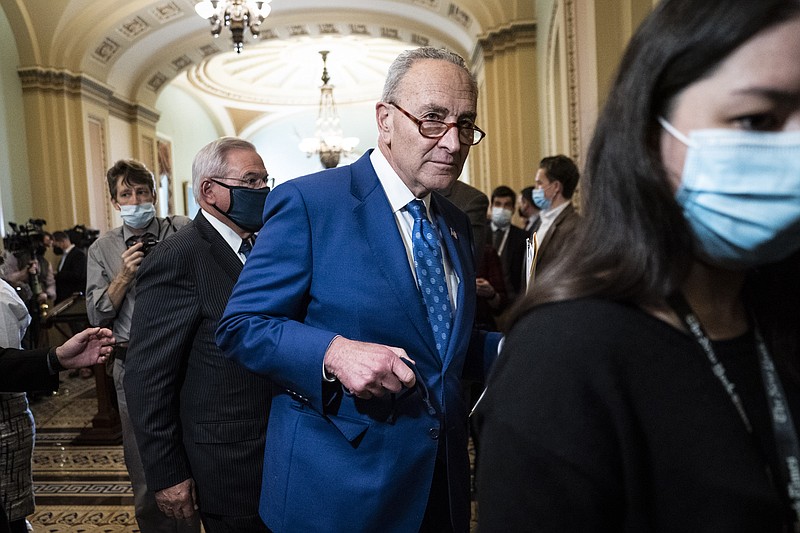 The announcement of the planned action by Jan. 17 represented Schumer's strongest endorsement yet of trying to muscle through legislation that has been stymied because of Senate rules requiring a 60-vote threshold.

[Video not showing up above? Click here to watch » arkansasonline.com/14schumer/]

How the Senate rules would be changed remains under discussion.

"We hope our Republican colleagues change course and work with us," Schumer said in a letter. "But if they do not, the Senate will debate and consider changes to Senate rules on or before January 17, Martin Luther King Jr. Day, to protect the foundation of our democracy: free and fair elections."

For the strategy to succeed, however, Schumer will need buy-in from two fellow Democrats -- Sens. Joe Manchin of West Virginia and Kyrsten Sinema of Arizona, who have voiced skepticism or opposition to changing Senate procedures in a way that would be needed to push voting-rights priorities across the finish line.

With Republicans unified against Democrats' plans, the only way to pass legislation is to alter Senate filibuster rules. That would mean all 50 Democrats uniting in favor of both a rule change and the underlying legislation.

In his letter, Schumer argued that the issue of voting rights presents one case where changing Senate rules is warranted.

"We must ask ourselves: if the right to vote is the cornerstone of our democracy, then how can we in good conscience allow for a situation in which the Republican Party can debate and pass voter suppression laws at the State level with only a simple majority vote, but not allow the United States Senate to do the same?" he wrote. "We must adapt. The Senate must evolve, like it has many times before."

Republicans blasted Schumer for threatening to change the rules.

"Senator Schumer's rash, partisan power grab should be seen for what it is -- desperation and a failure to do what [President] Joe Biden and Democrats ran on: unity," Sen. Mike Lee, R-Utah, said in a statement.

Schumer also made clear that Democrats will use this week's anniversary of the Jan. 6 insurrection to build the case for protecting voting rights.

"Make no mistake about it: This week Senate Democrats will make clear that what happened on January 6th and the one-sided, partisan actions being taken by Republican-led state legislatures across the country are directly linked, and we can and must take strong action to stop this antidemocratic march," he said.

Schumer assailed former President Donald Trump, who has perpetuated his claim that the 2020 presidential election was rigged, and Republicans who have embraced and promoted that widely debunked allegation.

"Much like the violent insurrectionists who stormed the U.S. Capitol nearly one year ago, Republican officials in states across the country have seized on the former president's Big Lie about widespread voter fraud to enact anti-democratic legislation and seize control of typically non-partisan election administration functions," Schumer wrote.

Manchin and Sinema have tried to warn their party off changes to the Senate rules, arguing that when Republicans take majority control of the chamber, they could use the lower voting threshold to advance bills that Democrats oppose.

Biden has waded into the debate cautiously. A longtime senator, he largely stands by existing rules, but he is also under pressure to break the logjam on the voting legislation.

Voting-rights advocates warn that Republican-led states are passing election legislation and trying to install election officials loyal to Trump in ways that could subvert elections.

Schumer is vowing to bring a revised version of the $2 trillion tax, climate and spending package to the floor for a vote as soon as this month, despite the unresolved differences within his party that have stalled the legislation.

Schumer's strategy still faces a major roadblock from Manchin, who stunned Biden and fellow Democrats in late December by saying he wouldn't support the House-passed bill and was walking away from negotiations.

To gain Manchin's support, Democrats will need to reimagine their wide-ranging social policy bill that funds health care initiatives, climate programs and new supports for children and families. Revising the bill will require scaling back some elements and cutting other programs entirely.

Congressional Progressive Caucus Chair Pramila Jayapal, D-Wash., said on MSNBC on Sunday that it's urgent for the Senate to pass a version of the Build Back Better plan that Manchin can support. She said she believes it is still possible to pass a bill based on an outline Manchin and Biden negotiated prior to the House passing its $2.2 trillion bill.

"He said that he just can't do the bill that we passed out of the House," she said. "As you remember, we added some things that were not in the framework."

The House, for instance, added a paid leave provision. That bill also has Medicare hearing benefits that Biden put in his framework even though Manchin had never formally supported them.

Jayapal estimated that less than 10% of the House bill deviates from the Biden framework and urged the Senate to work quickly.

The economic package, universally opposed by Republicans, was supposed to be the centerpiece for Democratic campaigns as the party fights against long odds to maintain control of the House and Senate. Its components are popular in polls, especially an extension of the child tax credit that expired in December.

Progressive Democrats in the House, who for months have been at odds with Manchin and Sinema, are pressing Biden to use executive action to achieve some of the legislation's goals. But that tool has limited applications and both sides must come to terms with what can pass with such narrow Democratic majorities in the House and Senate.

Manchin has said he'll support only up to $1.75 trillion in spending paid for by tax increases on high earners and corporations.

Among his chief concerns is the impact of federal spending on inflation. The consumer price index report due out Jan. 12 will be a key indicator for the direction of the debate after December's report showed prices up 6.8% year over year.

Democrats in any case plan to argue that the bill will actually bring down inflation in the long term because of provisions to lower health care and child care expenses.

"We know that BBB [Build Back Better] is the best tool we have to bring down the biggest cost families face: housing, child care, and health care -- all while creating good-paying union jobs. I will work with my colleagues to enact the goals of BBB into law," Senate Banking Chairman Sherrod Brown, D-Ohio, said in a statement.

The White House, which Manchin accused of bullying, will attempt to woo the senator in the coming weeks. Manchin gave Biden a $1.8 trillion counteroffer before walking away from the table, which could form the basis of a future deal. The senator suggested scrapping expanded child tax credit payments and focusing instead on universal prekindergarten, renewable energy tax credits and expanded Obamacare subsidies.

Manchin has two sets of demands that will be especially hard for Schumer and Biden to meet.

One is that each program bolstered in the bill must retain the same level of funding for at least 10 years. The bill as structured cuts off programs like the child tax credit expansion after one year, in the hope that a future Congress will extend it and come up with a new revenue source. Extending the credit for a full 10 years could cost $1.6 trillion, leaving room for little else under Manchin's topline of $1.75 trillion. That creates a political problem with progressives, especially in the House, who want a panoply of programs in the bill.

Manchin also demands the bill do more to reverse former President Donald Trump's signature 2017 tax cuts. Manchin supports raising the corporate tax rate to 25%, which the White House and House Democrats would also endorse. But Sinema opposed raising the corporate tax and raising rates on top-earning individuals. Instead, the bill creates a 15% corporate minimum tax that some Democrats acknowledge will be difficult to implement and enforce.

"If you're going to negotiate, then negotiate. Don't start picking and choosing and playing games," Manchin said of the drug provisions.

Schumer is looking to create a deadline for the talks with Manchin by forcing votes on the package in January, but it is not clear if that deadline will come and go just as Schumer's Christmas deadline did.

"We are going to vote on a revised version of the House-passed Build Back Better Act -- and we will keep voting on it until we get something done," Schumer said in a letter to his colleagues at the beginning of the two-week recess.

The House is out until next week, but moderates there are urging Schumer and the White House to focus on a few priorities and extend them for 10 years. They differ from Manchin in viewing the child tax credit as a must-have.

"Our priorities were the child tax credit, making sure we have a large investment in fighting climate change, and making sure that we keep the Affordable Care Act [Obamacare] premium subsidies in place and address the coverage gap," House New Democrat Coalition Chair Suzan DelBene of Washington state said Dec. 21 on the PBS NewsHour.

The Congressional Progressive Caucus, on the other hand, is advocating working off the House-passed draft and having Manchin specify which programs he specifically objects to.

Jayapal said Sunday that passing the bill is key to showing the public that Democrats can govern.

"Joe Biden and Democrats need to succeed in showing Americans we can get stuff done," she said. But because it is unclear how long the Senate would need, Biden should take executive actions where possible, Jayapal said.

Information for this article was contributed by John Wagner and Mike DeBonis of The Washington Post; by Lisa Mascaro of The Associated Press; and by Erik Wasson and Laura Davison of Bloomberg News (TNS).