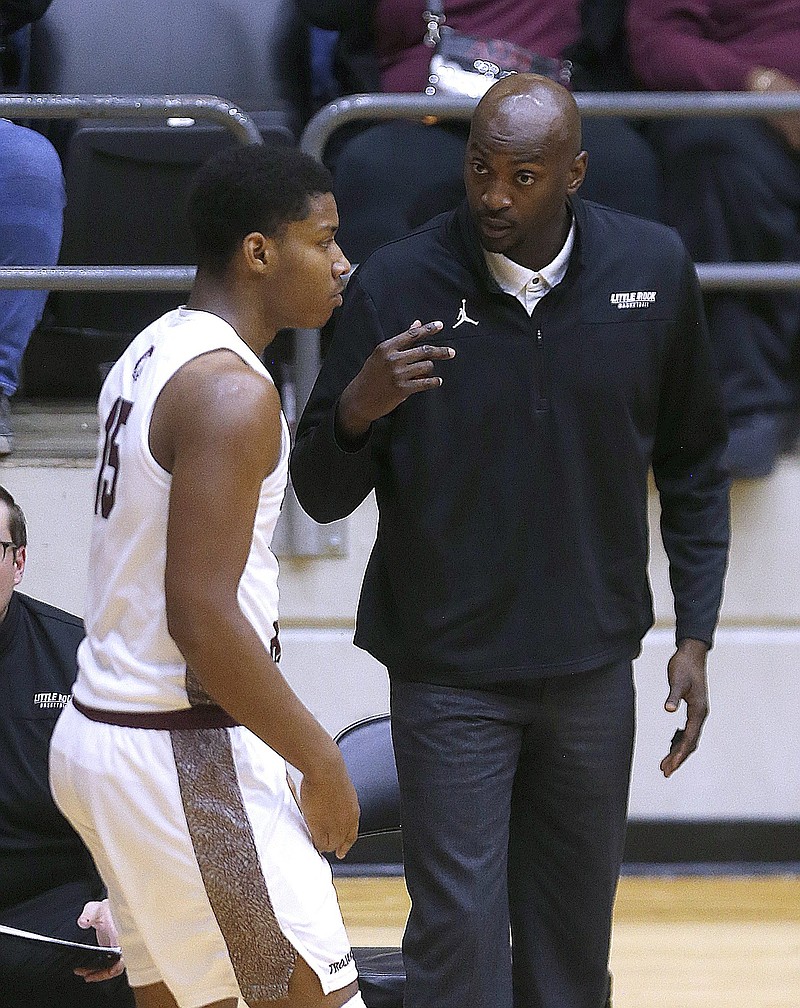 UALR assistant coach Julius Hodge talks with guard Myron Gardner (15) as he leaves the court during the second half of the Trojans' 78-66 win on Thursday, Dec. 30, 2021, at the Jack Stephens Center in Little Rock. .More photos at www.arkansasonline.com/1231ualr/.(Arkansas Democrat-Gazette/Thomas Metthe)

Perhaps Julius Hodge thought this was the time he'd avoid a question about Chris Paul.

Hodge, a first-year University of Arkansas-Little Rock men's basketball assistant coach, has been inextricably linked with the 11-time NBA All-Star and seven-time first-team All-NBA Defense honoree ever since March 6, 2005.

Just as Hodge's interview with a reporter inside the Trojans' offices at the Jack Stephens Center was about to wrap up, he was asked if he'd talked to Paul since.

Hodge, 38, leaned back in his chair and let out the heartiest of chuckles. "Everyone is always ribbing me about that."

Hodge was referring to an incident few Atlantic Coast Conference fans forget. Paul, then a 6-foot, 175-pound freshman for Wake Forest, was matched up with Hodge, a senior at North Carolina State, in Raleigh, N.C. The pair got entangled while the 6-7 Hodge was attempting to post up Paul, and just as the Wolfpack were kicking a pass out off an offensive rebound, Hodge doubled over before falling to the ground.

No officials had seen what sent Hodge to the floor. A replay moments later made it quite obvious: Paul's right fist landed squarely in Hodge's groin.

"When people always bring that up, I have to let them know, 'Alright, it was in the heat of the moment,'" Hodge said. "[Paul's] a competitor. He's going to do whatever it takes to win, and he hit the game-winning shot after it, so there's a part of me that loves that."

Just as Paul is still showing his bonafides in the NBA, Hodge is sticking around the game that took him to 12 foreign countries over a decade-long professional career. And already at his fourth stop in just seven seasons of college coaching, Hodge is giving his bosses plenty of reason to believe he's only beginning in this phase of his basketball life.

"I want everyone on my staff to have a chance to be a head coach," UALR Coach Darrell Walker said. "[Julius] is going to be a good coach. He's got the right demeanor, he knows how to deal with players, he's played at the highest level and he's been around this game a long time."

For a time, the NBA seemed like it would be Hodge's path. He grew up in Harlem and was a 2001 McDonald's All-American at the Bronx's St. Raymond High School before heading to N.C. State.

Over two seasons, he made just 23 appearances, playing less than 100 minutes combined with the Nuggets and Milwaukee Bucks. And while his time in the NBA was brief, Hodge got a taste of coaches such as George Karl, Terry Stotts and Lawrence Frank -- on top of the many he'd played for in college and abroad, starting in Italy in 2007.

He didn't know he'd be following their path at the time, but after finding himself opposite Kyrie Irving in a pickup game back in Raleigh, Hodge recognized his playing career might not last as long as he'd once hoped.

"I could not keep him in front of me," Hodge said of Irving, the top pick in the 2011 NBA Draft. "I prided myself on being able to guard smaller guards who can dribble and shoot the ball ... and he completely destroyed me for an hour-and-a-half straight, full court."

Following stops in Lebanon and the United Kingdom in 2014, Hodge retired. He joined now-Alabama Coach Nate Oats' staff at Buffalo for the 2015-16 season before reconnecting with Herb Sendek at Santa Clara in 2016.

Sendek, who'd recruited Hodge to N.C. State 15 years prior, watched his former student quickly adapt to the task of helping develop and recruit other young players.

"He was still Julius but obviously older and more mature," Sendek recalled. "It's one thing being a player. It's another thing being in an administrative role and a completely different thing being on a coaching staff. ... Those are two significant transition periods."

Two seasons later, Hodge jumped up from the West Coast Conference to the Mountain West Conference, working for Jean Prioleau at San Jose State. When Prioleau was fired in March, Hodge headed back toward the East Coast, joining Walker's staff.

Not even a decade removed from slipping on a jersey, Hodge said he feels young -- something he credits to being around the college game.

The days of stepping onto the hardwood feel long ago, however.

"I still remember my experiences as a player and I'm adding onto them as a coach," Hodge said. "[But] I'm 38 years old now, I'm married, I have my family. I'm Santa -- I'm no longer waiting for Christmas Eve to open presents."

Since arriving in Little Rock in June, he's learned X's and O's from Walker, a 10-year NBA player himself. Hodge has also grown to appreciate the gregarious 60-year-old's ability to often create levity in the midst of what can become a long season.

"He's hilarious, he always has his instances where the guys are laughing and joking, having a great moment," Hodge said of Walker. "I take from that so much because that's kind of my personality. I like to see everyone happy."

Walker has gotten exactly what he anticipated from a former longtime pro, describing Hodge as "diligent" in his work scouting, recruiting and coaching on the floor.

They're all the telltale signs of someone who Walker views as a candidate to one day step into his role as a Division I head coach.

Hodge has envisioned that future, too. He's already got his own playbook of how he plans to run his program -- an amalgamation of the many "great coaches" he's played or worked for over the last two-plus decades.

He knows he's ready now. But just as he did as a player, Hodge is waiting his turn.

It's a process he likens to meeting his now-wife Lilly at a Raleigh nightclub many years ago.

"At first there was some trepidation," Hodge said, thinking she was too beautiful for him. "But then it's like, 'Hey, just go for it,' and every day you have to make it work.