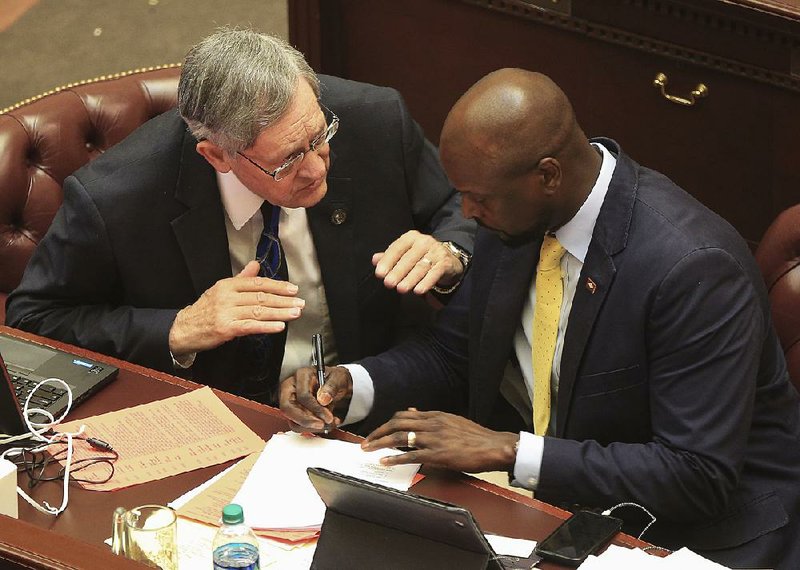 FILE - Rep. Jack Ladyman (left) talks with Rep. Monte Hodges about Senate Bill 688, which would provide tax credits to businesses. The bill was approved by the House.

State Rep. Monte Hodges of Blytheville says he is running for Arkansas' 1st Congressional District, setting up a Democratic bid for a seat the party has not won in more than a decade.

Hodges is a banker who represents state House District 55, which covers part of Blytheville.

"I want to be the congressman that fights for your needs," he said in an interview Tuesday.

The 50-year-old state lawmaker said the voices of district residents are being underrepresented in the nation's capital.

"I can probably count with three fingers how many interactions I've had with our 1st congressional leader at this moment," he said, referring to the incumbent, U.S. Rep. Rick Crawford, a Republican from Jonesboro.

"And that's the sentiment I've gotten as I've spoken to people throughout this congressional district – that he has been absentee. We sent him to D.C. and we've not seen him since then," he said.

[Graphic not showing up above? Click here to see it: arkansasonline.com/arkhousemaps]

Infrastructure is an important issue for the district, Hodges said, but Crawford voted against the Biden administration's bipartisan infrastructure bill. Arkansas would secure more than $4 billion in funding for a variety of broad infrastructure sectors over five years under the law, according to White House estimates.

In the district, infrastructure shortcomings were on national display with the discovery of a fracture in a beam of the Interstate 40 bridge connecting Arkansas and Tennessee.

The episode sparked the immediate shutdown of a bridge that carried more than 40,000 vehicles a day.

"To vote against the self interest of your own state was very disheartening," Hodges said of Crawford's vote.

Arkansas' 1st Congressional District has not been kind to Democrats for many years and Hodges faces an uphill battle in winning the district.

Crawford ran unopposed in the 2020 general election and trounced Democrats by wide margins in past elections. State Rep. Brandt Smith of Jonesboro has announced plans to run against Crawford in the 2022 Republican primary.

It was 2008 the last time a Democrat won Arkansas' 1st Congressional District.

The district holds a Partisan Voter Index score of R+21, according to the nonpartisan Cook Political Report. That means the area voted an average of 21 points more Republican in the last two presidential elections compared to the U.S. overall.

Hodges says voter turnout will be crucial, arguing there are many people who are unregistered to vote or did not vote in the last midterm election.

"I plan to bring some energy, some synergy, some vitality back to the 1st Congressional District," he said, mentioning that economic development is a key issue in the district.

Outside of the state General Assembly, Hodges works as senior vice president of commercial lending at Southern Bancorp. He attended community college before graduating from Arkansas State University. He and his wife have a teenage son, he said.

Crawford is one of dozens of House Republicans who voted to overturn election results from the 2020 presidential election. He was the only lawmaker in Arkansas' House delegation to make such a vote.

"What can you say? That speaks [volumes] all by itself," Hodges said.

In response to Hodges' announcement, Crawford issued a statement Tuesday saying he is focused on "fighting the left-wing extremism of the Biden Administration that is damaging our economy." He said the economy is being hurt with "out-of-control spending" and "soaring inflation at rates."

He went on in the statement to say "national Democrats have used their one-party rule of government to pay people not to work" and "to wage a war on US energy production."