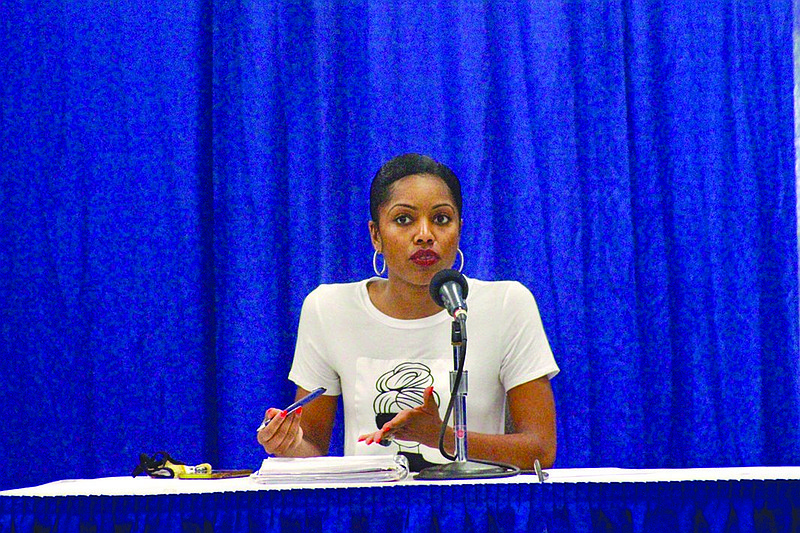 Joni Alexander, a member of the Pine Bluff City Council, is shown in this May 2021 file photo. (Eplunus Colvin/Pine Bluff Commercial)

Joni Alexander announced in a news release Wednesday that she has decided not to seek reelection as Ward 1 City Council member.

Securing her win in 2018 against a 12-year incumbent and 87% of the vote in the general election, Alexander -- the wife of Jefferson County Judge Gerald Robinson -- became the youngest person ever elected to office in Pine Bluff.

Alexander is currently the only woman serving on the council. According to the release, Alexander "was likely a sure-win for her council seat."

In 2018, Alexander, a Democrat and political newcomer, took a big lead when the results of early and absentee voting were reported and never looked back as she soundly defeated her Republican opponent, the Rev. Jesse Turner.

"I came into this position with clear goals, most of which I've achieved," said Alexander. "I saw my four years as a deadline to make a difference and not as a career so this was not a difficult decision."

In a follow-up interview with the Pine Bluff Commercial, Alexander said the idea to run for City Council in 2018 came from everyone else and was not something she had sought after at first. She was also thankful for Robinson, who supported her during her campaign and term and ultimately her decision to not seek re-election.

[Video not showing up above? Click here to watch » arkansasonline.com/16pb/]

Alexander was tasked to fulfill an initiative started by council member Ivan Whitfield concerning a drag racing facility in Pine Bluff. Her efforts resulted in a reveal proposal of a multipurpose entertainment park that would include a half-mile drag strip, bleachers, a go-kart track, paintball fields and much more on 206 acres near I-530 and Grider Field.

"My goals coming in were to make a positive impact moving the city forward with an emphasis in public safety, living wages and presenting something new and innovative," said Alexander. "I also focused on revenue-building initiatives with a focus on the budget."

Alexander, who has a bachelor of arts in sociology with a minor in religious studies, said her focus will continue to be on the drag strip project, even after her term is up.

A former assistant to former Mayor Debe Hollingsworth, Alexander said she hopes Pine Bluff citizens will try and educate themselves on the roles of their elected officials and get more involved in city government. She said she is forever grateful for the experience as an alderwoman and she will continue to seek efforts to move Pine Bluff forward.

"I've sponsored and supported major transformative legislation while being a voice of logic and reason. Though my term on the council is coming to a close, my season in politics is not over," said Alexander, who has also ventured into her own business, Inoj, LLC. "I plan to spend my last year focused on securing a public-private partnership for a drag strip facility in Pine Bluff and after leaving (office), I will remain committed to the work that I've done as a council member and maintain an active involvement in initiatives that advance the progression of Pine Bluff."