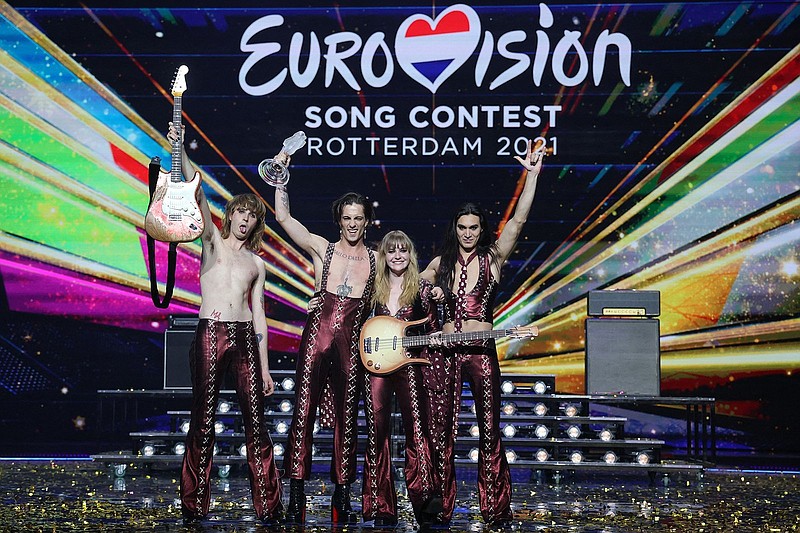 Italy’s Maneskin pose for pictures on stage May 22 with the trophy after winning the final of the 65th edition of the Eurovision Song Contest, at the Ahoy convention center in Rotterdam, Netherlands. The contest helped propel them to the United States, which has fallen for them. (AFP via Getty Images/TNS/Kenzo Tribouillard)

LOS ANGELES — The four members of the Italian rock band Maneskin grew up gigging around the Eternal City of Rome. But when they flew into L.A. for their first sold-out gig at the Roxy in early November, there was one local site of Saturnalian bad behavior they just had to visit.

"The Rainbow Bar!" bassist Victoria De Angelis shouted when asked about which local rock 'n' roll haunts the band had to see on its first trip to the West Coast. "I grew up on metal and glam rock, so we were all sitting on the couch in there, like, 'This is where Lemmy and Motley Crue used to hang out.'"

Maneskin is an almost unnervingly lithe band of 20-somethings who can squeeze into '70s David Bowie bodysuits (or, as is often the case at photo shoots, squeeze out of them). It emerged victorious at 2021's Eurovision Song Contest that, decades earlier, gave the world ABBA and Celine Dion; last week, it helped ring in 2022 on "Dick Clark's New Year's Rockin' Eve With Ryan Seacrest."

But Maneskin is an anomaly in a rap- and pop-driven era: a guitar/bass/drums combo indebted to Queen and T. Rex that performs largely in Italian and whose breakout U.S. single was a cover of the Four Seasons' oldies staple "Beggin'."

Even its first scandal — a stray Eurovision camera angle capturing what looked like cocaine at its table, which the band denied having and the European Broadcasting Union cleared it of — seemed charmingly retro.

After a year when it made genuine inroads into the Hot 100, where "Beggin'" cracked the top 15, Maneskin — Danish for "Moonlight" — could reasonably claim to be the biggest new rock band of 2021. It topped U.S. rock and alternative radio charts; "Beggin'" has more than 800 million plays on Spotify, and "I Wanna Be Your Slave" tops half a billion too.

"They're one of our three biggest hits of the year, if not the biggest," said Lisa Worden, program director of Alt 98.7 in L.A. and vice president of rock and alternative music at iHeartMedia. "It's so unusual to have a rock band with streams of that magnitude. To have a song like 'Beggin' that gets launched on pop and rises in alt and rock, it's been a while since we've had that across formats."

"The fact that there's a band in the top of the charts playing just three instruments, it's something that hasn't happened for so long," De Angelis said. "But we didn't expect it to happen in such a short amount of time."

A couple days after their Roxy show, the foursome — bassist De Angelis, singer Damiano David, guitarist Thomas Raggi and drummer Ethan Torchio, all between 20 and 22 — were smoking cigarettes for breakfast on the roof of the Mondrian in West Hollywood. De Angelis is the chattiest in English; Raggi and Torchio were more laid-back, while frontman David was mostly content to quietly smolder on the rooftop lounge couch.

They almost didn't make it onstage. After the band's U.S. TV debut on "The Tonight Show," Torchio came down with the flu just as they landed in L.A.

A resurgent covid-19 (which tore through Italy in the first waves of the disease) had them fearing the worst as they prepared for a packed Roxy crowd. The band would have had to cancel if everyone hadn't tested negative, which they did. "It wasn't too bad. It's getting better," Torchio said, still a little wobbly from the show.

But they pulled it together for one of the last pre-omicron blowouts on the Sunset Strip. "We were playing songs in Italian from the record that we didn't think were known here," De Angelis said. "But everyone knew the words, even if it was harder for them to sing."

Maneskin hit U.S shores fully formed and tightly honed. Its members have played together since 2016 and already put out two well-received records in Italy before March's "Teatro d'ira: Vol. I," released before its May Eurovision win. "It's a completely different thing when you play on television because it's so important to be precise," De Angelis said. "You can't get anything wrong because you'll see it through the television. At a gig, it's not that important to be perfect."

From "American Idol" to Olivia Rodrigo, TV fame can be a leg up the pop charts, but Maneskin was already wary of its biggest win defining it out of the gate.

"We were pretty far from that concept," David said of Eurovision. "The fact that we won was kind of strange because we're not very mainstream for that kind of competition, but we knew we already had a catalog."

That catalog is packed with zippy, bombastic yet endearingly analog tracks like Eurovision winner "Zitti e buoni," which has a Strokes-y cool in the verses and a Zeppelin-size wail in the chorus. "MAMMAMIA" makes a strong case for a mid-'00s dance-punk revival, and the band turns "Beggin," a Four Seasons song twice as old as the band members, into a 2021 pop-rock single as crackling as "Good 4 U."

"We meet young people that are like, 'I'm 10 years old, I've never heard stuff like this, now I want to buy a drum kit,'" Raggi said.

Oldies resurface on TikTok all the time today, but era-hopping covers are part of the band's appeal. "When we make a cover, we don't really think about the original structure or the original instrumental. We try to rebuild it," De Angelis said.

"I bet a good portion of my audience didn't even realize it was a Four Seasons cover," Worden agreed.

Worden booked the band for iHeartRadio's ALTer Ego rock festival at the Forum in Inglewood on Jan. 15. "It's important to give them a chance to be more than a single," she said. "They deserve to have more of their music exposed. I saw them at the Roxy and they're a force. I think people will walk away with a new respect for them."

Maneskin has an even bigger show this year in its hometown at the Circo Massimo, a huge public park that was once the site of ancient Roman blood sport and carnivals.

"It's gonna be our biggest crowd ever, so it's gonna be very emotional," David said. "It's like the biggest place where you can play in Rome." As Italy continues to endure covid-19, he added: "I think it'll be very good for the country too."