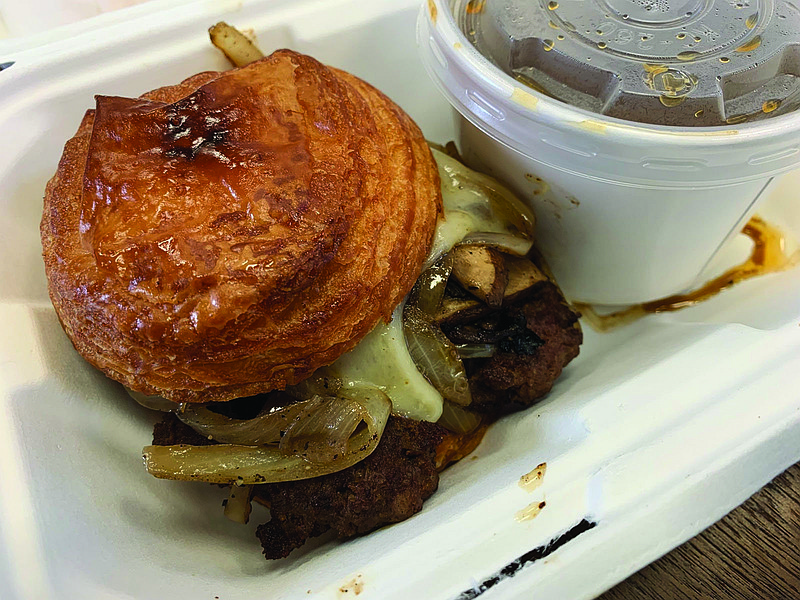 You'll still have to visit the food truck for The Croissanterie's popular burger-on-a-croissant, even after owner Wendy Schay opens a brick-and-mortar storefront on Cantrell Road, with a February target. (Democrat-Gazette file photo/Eric E. Harrison)

We reported last week that Tacos Godoy is setting up shop in the former Thirst N Howl, 14710 Cantrell Road, Little Rock, and that another food-truck operation was creating a similar setup next-door in what had been most recently JK's Bar-B-Que.

Now we have confirmed that the operation is The Croissanterie, which will use the space for a prep kitchen, to expand its wholesale and catering business and to open up as a "bakery patisserie cafe" for breakfast and lunch counter service and the occasional Sunday brunch and chef's dinner, says owner Wendy Schay.

The timeline to open has shifted into early February, depending on the permitting process and when they can get equipment installed, Schay says.

Hints about the plans had been leaking out on social media — a recent Facebook post revealed that "We are moving into a brick and mortar in WLR! The food truck is not going away! ... Stay tuned for more info!" And a link to our column last Thursday about Tacos Godoy carried the legend, "Excited for this wonderful family! Looking forward to being neighbors."

Schay explained that the space sort of fell into her lap. "We were looking for more prep space, and Alejandro [Tacos Godoy owner-operator Alejandro Gutierrez] reached out to us — he's a great friend of ours." When the landlord told folks in his office that The Croissanterie was a possible tenant, "people cheered: 'We know them!'" Schay says.

The new prep space will allow Schay to expand her baked-goods production above and beyond croissants to include breads and sourdough. Over-the-counter hours are tentatively set for 7 a.m.-2 p.m. Wednesday-Saturday but Schay says there have been requests for them to stay open after school. "So we'll feel it out and see where it goes," she says.

As for their popular burger-on-a-croissant, however, Schay says: "We won't be offering the burger in the shop. People will have to come to the truck." You'll be able to follow where the truck is parking and vending via the website — thecroissanterielr.com — and the Facebook page: facebook.com/thecroissanterielr. The phone number will remain (501) 412-4244.

And speaking of food trucks, one of our eagle-eyed correspondents reports Chicken Wangs III, 9201 Maumelle Blvd., on the North Little Rock side of Maumelle, has shut down its operation but will continue to operate a food truck. A website, chickenwangsiii.net, is still up and running but gives no indication of any change in status; a call to the listed phone number, (501) 975-2455, produced only a rapid busy signal.

TOPDOG Hot Dogs and Beer opened Tuesday, with, per a Dec. 31 post on Facebook (facebook.com/TOPDOGLR), limited hours and a limited menu, in the "shotgun" space at 308 Main St., Little Rock, that had previously been a deli outlet for next-door Bruno's Little Italy and subsequently the too-short-lived Donuts & Deli. The website, topdoghotdogcompany.com, shows the food lineup to include 100% Angus beef hot dogs, Korean-style corn dogs, "smash time" burgers, a cheesesteak and a chicken sandwich; presumably, given the name, it will also serve beer. (A pending-license announcement has been posted on the front door.) Right now they're serving noon-about 4 p.m. Tuesday-Saturday. Both listed phone numbers — (501) 414-8775 and (501) 414-8742 — are supposedly up and active.

Business section reporter Noel Oman sniffed out a building permit for the structure at 2601 Springer Blvd., Little Rock, that has previously housed restaurants Burger House & More and Mrs. T's & Dora's House. The permit shows Tri-State International Building Systems planning to spend $76,500 to "repair sheet rock, roofing, painting, remove and replace doors and windows, replacing cabinets," mostly on the building's first floor, which will house a restaurant. What will that restaurant be? We're not sure, but Oman sleuthed out a 2019 plumbing permit showing one Will McClinton as the "new owner" for something called Se7en Seasons Cuisine LLC at that address.

Coming to downtown Conway: The Rogue Roundabout, billed as "a craft kitchen and beverage lab." Where, exactly, in downtown Conway is to be revealed sometime this week, but management tells us, "We are really excited about our building." Per a Jan. 1 post on Facebook (facebook.com/therogueroundabout): "Our goal is to create an inclusive community space serving craft beverages, craft food, and creating a #ConwayCrafted experience. We are a work in progress, and we are excited for you to be a part of our journey!" They'll be offering "samples of our family friendly tap items" at Conway's Downtown Art Walk, 5-8 p.m. Jan. 20 along Oak Street between Chestnut and Front streets.