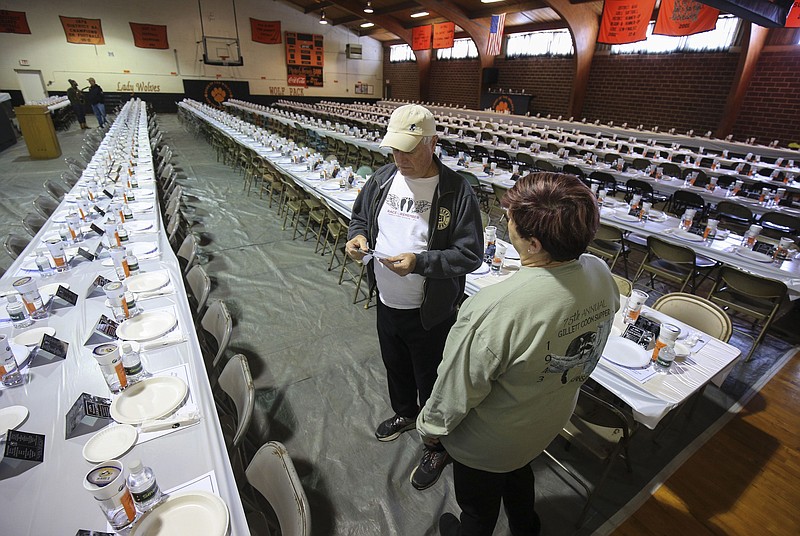 Arkansas' most notable political dinner is coming back this weekend, after a year off, amid a surge in coronavirus cases.

The 78th annual Gillett Coon Supper, a scholarship fundraiser for local high school graduates and popular stop on the state's political circuit, will be held Saturday evening. The Berry Pre-Coon Supper Reception that has preceded it for the past decade will also be held that afternoon.

The dinner features barbecued raccoon, served with less gamey Southern staples such as sweet potatoes. It's been featured in national media and appears in the Almanac of American Politics.

In the fall of 2020, before coronavirus vaccines were available, organizers opted to postpone the events to 2022. But this week, Arkansas saw two record-breaking days for new coronavirus cases, with nearly 7,500 new infections reported Wednesday.

Bauer said the event was canceled last year because of the state's guidelines for large gatherings, which included taking attendees' temperatures and addresses.

"The guidelines were just such that there's no way that we could comply or risk doing that last year," he said. "With everybody that's had their shots, and of course, they're not 100%, but we are pleased to be able to continue with the scholarship program that we've got going."

Since the scholarship program began, it has awarded nearly $150,000 in college scholarships for high school graduates from south Arkansas County, he said. The dinner itself is a local tradition that goes back further and used to include hunting raccoon and deer.

Bauer said there has been lots of interest in the event, since 2022 is an election year. The venue, the Gillett Elementary School gymnasium, seats 600.

Bauer said he had about 100 tickets left as of Wednesday and expects the event to be at capacity. He added that he suspected some people are waiting until the last minute to buy their tickets because of the virus.

Ticket prices have gone up from $25 to $30 this year because the price of brisket and ribs has risen, he added.

Bauer said he expects to see a lot of people wearing masks, though the event isn't mandating them or enforcing any other requirement.

Gabe Holmstrom, an organizer of the pre-supper reception at the Berry Farm Shop in Gillett, said Wednesday the event is going forward after "a significant amount of discussion with all the parties involved."

Holmstrom said the reception is essentially an outdoor event, since it's in a farm shop with large roll-up doors on the walls that will be open. The organizers are bringing in additional heaters. The National Weather Service is calling for a good chance of all-day rain Saturday with a low of 54.

Holmstrom added that masks will be encouraged and available.

"For an outdoor event, it seemed the best course of action was to continue on," he said.

He said he expects attendance to be slightly down but to still have a good crowd, with a lot of interest because of the coming 2022 election.

"I've been getting a lot of calls from candidates asking if the event is still on," he said.

The reception is, like the supper, a scholarship fundraiser, with tickets and sponsorships going toward awarding a qualifying Arkansas State University student with an interest in public policy and service. The reception is named for former U.S. Rep. Marion Berry of Gillett.

Though neither event allows campaign speeches, the Coon Supper crowd typically hears remarks from the state's governor and congressional delegation.

"This is a true slice of Americana, a true slice of a throwback to the arena of retail politics at its finest," Holmstrom said, noting that the Coon Supper allowed politicians to get their message out to a lot of people before the age of television and social media.

Spokesmen for Hutchinson and Cotton said they won't attend because of scheduling conflicts.

"He always enjoys going but this year he couldn't make it because of a prior conflict," Hutchinson spokeswoman Shealyn Sowers said. The governor is serving his last year in the office.

Cotton spokesman James Arnold said the senator's team will be well represented by his staff.

Several candidates who are running for governor and lieutenant governor in 2022 said they plan to attend.

Fellow Democratic candidate James Russell III wrote on Facebook on Wednesday that he tested positive for covid-19, despite being fully vaccinated, and that he will be unable to attend to obligations over the weekend because of the virus.

A spokesman for Sarah Huckabee Sanders, the sole Republican in the governor's race, did not return a request for comment.