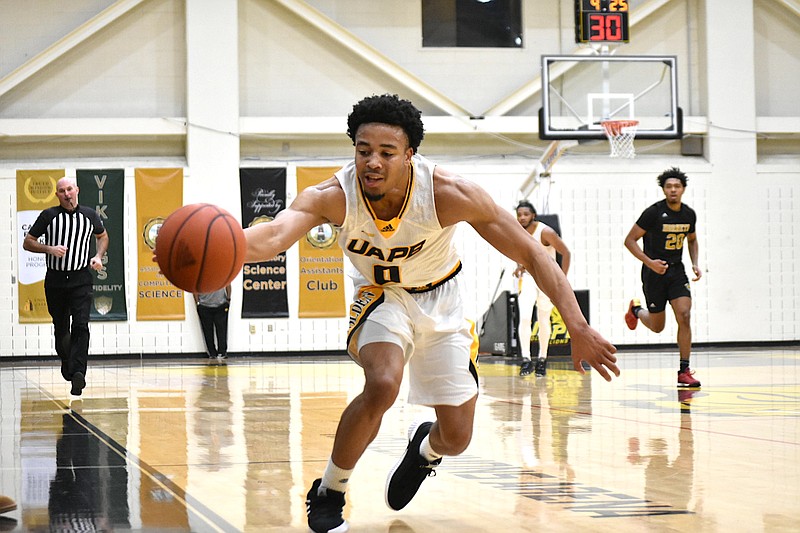 Kshun Stokes of UAPB loses the ball out of bounds in transition during the first half against Alabama State on Wednesday, Jan. 5, 2021, at H.O. Clemmons Arena. (Pine Bluff Commercial/I.C. Murrell)

Down by 10 points in the first half, the University of Arkansas at Pine Bluff was never out of Wednesday's game against Alabama State University.

Now, the Golden Lions are doing very well in the Southwestern Athletic Conference race, albeit two games in.

UAPB rebounded from an 8-point deficit with 10:37 remaining and got 22 points from Shawn Williams to hold off the Hornets 70-68 at H.O. Clemmons Arena and avoid a 0-2 start in the conference.

Williams made 7 of 7 free throws and hit 3 of 9 3-pointers in helping the Lions (3-12, 1-1) win for the second time in three games and first time since Dec. 18, when they routed Ecclesia College.

"It shows a lot of growth," the senior transfer guard said after the Lions won their closest game of the season. "Practice, working hard, and we finally put it on the court and got that late-game dub ['W' for win]."

Clark stole the ball with 29 seconds left to give Alabama State a final opportunity. Isaiah Range's baseline jumper did not fall, and the Hornets could not score on two putback attempts just before the buzzer sounded.

"That's what we tell the guys, play to the end," Lions Coach Solomon Bozeman said after his first career conference victory. "We knew it was going to be a dogfight, so we stayed on them about finishing the game and playing defense all 40 minutes."

"We know we've got scorers," Williams said. "We've got plenty of scorers. We've just got to get stops."

Brahm Harris had 11 points, and DeQuan Morris scored 10 for the Lions, who trailed 35-34 at halftime.

Trey Sampson scored 8 points in his first start following a three-game absence. The junior transfer from Oklahoma's Northeastern State University was a contact to a covid-19 patient, according to Bozeman, and had missed the other two games because of an unspecified illness.

Jordan O'Neal finished with 12 points and 10 rebounds for Alabama State. D.J. Jackson and Jayme Mitchell each had 11 points.

Alabama State Coach Mo Williams, a 2009 NBA All-Star and 2016 NBA champion with the Cleveland Cavaliers, missed the game becasue of the birth of his seventh child, according to a team spokesperson. Williams missed last year's game in Pine Bluff because of covid-19.

A jump-ball tie-up led to a bench-clearing scuffle, earning UAPB (4-8, 0-2 SWAC) multiple ejections and forcing the game to end with 3:55 left in the fourth quarter.

Peat had 13 points and 9 rebounds to lead UAPB, which played without their two leading scorers in Zaay Green (13.8 points per game) and Khadijah Brown (11.8). Tyler Pyburn added 11 points, and Sade Hudson had 9.

UAPB's teams will play at Texas Southern University in Houston on Saturday, starting with the women's game at 5:30 p.m. 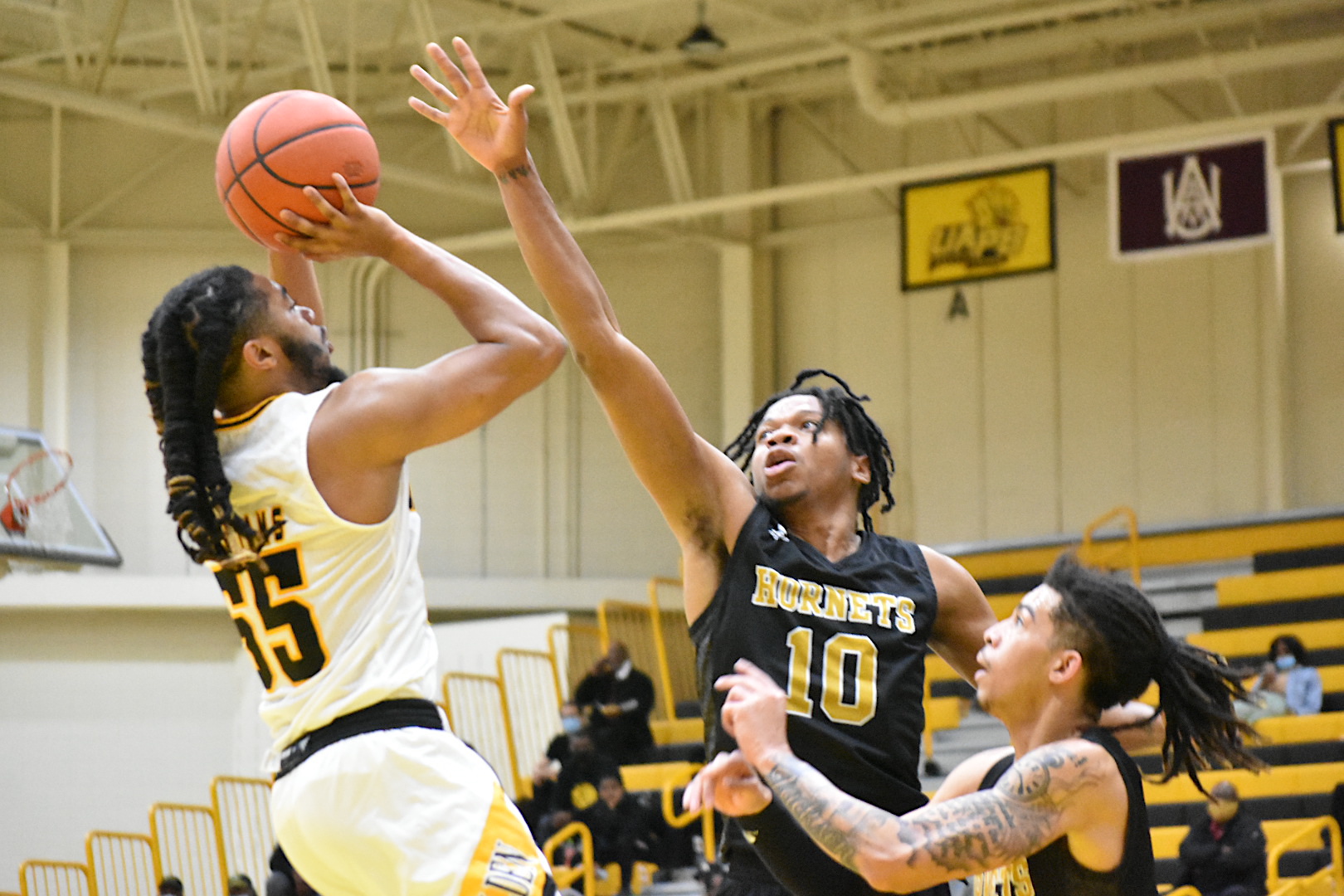 Shawn Williams of UAPB fires a shot over Michael Barber (10) and D.J. Jackson of Alabama State in the first half Wednesday, Jan. 5, 2021, at H.O. Clemmons Arena. (Pine Bluff Commercial/I.C. Murrell)