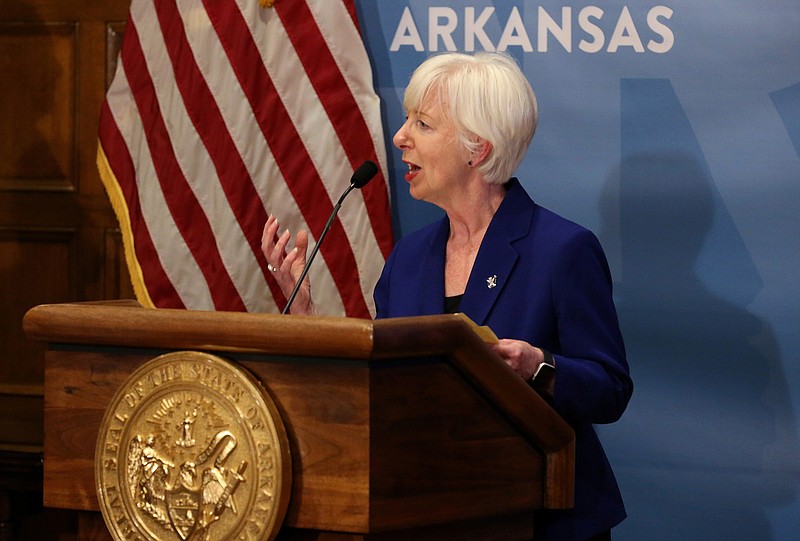 Cindy Gillespie, Secretary of the Arkansas Department of Human Services, talks about the developmentally disabled waitlist during the weekly media briefing on Tuesday, Dec. 14, 2021, at the state Capitol in Little Rock. .More photos at www.arkansasonline.com/1215gov/.(Arkansas Democrat-Gazette/Thomas Metthe)

The state's largest managed care provider for Arkansans with disabilities has agreed to pay almost $8 million in civil penalties and reimbursement to the Arkansas Medicaid program following an investigation.

The provider, Empower Healthcare Solutions LLC, is still under scrutiny from the Department of Human Services for its ability to meet state standards of care.

Back up: What is a managed care provider?

Managed care providers deliver health benefits and are compensated by the state’s Medicaid program on a per-member, per-month basis. The intention of this arrangement is to manage costs while providing high-quality care.

Specifically, Empower is one of four Provider-led Arkansas Shared Savings Entities, or PASSEs, in the state.

These entities funnel Medicaid benefits to networks of providers that offer a variety of services to individuals with complex behavioral health, developmental or intellectual disabilities. Care could include anything from counseling and speech therapy to inpatient psychiatric visits and medical equipment.

With 20,500 beneficiaries, Empower Healthcare is the largest PASSE, according to data from the Arkansas Department of Human Services.

What was Empower being investigated for?

Empower was being investigated for fraud after the state Office of Medicaid Inspector General said it had found evidence of fraudulent payments made by Empower that resulted in unnecessary costs to the Medicaid program.

The case was transferred to the attorney general's office, which did not identify any activity sufficient to support fraud charges, according to settlement documents. However, investigators did find $10,363,511 had been improperly reported in violation of the Arkansas Medicaid False Claims Act.

To address the violations, Empower agreed to pay almost $8 million in civil penalties and reimbursement to the Arkansas Medicaid program.

Why is Empower still under scrutiny?

Separately from the fraud concerns, the state Department of Human Services requested various information and reports from Empower in late December after a consultant questioned the company’s ability to adequately provide services.

The uncertainty arose from Empower’s split from Beacon Health Options Inc., a Boston-based behavioral health provider that owned a 16.6% stake in Empower.

The department is still looking into this concern, but Empower is currently operating as a provider.