Reloading shells has its rewards 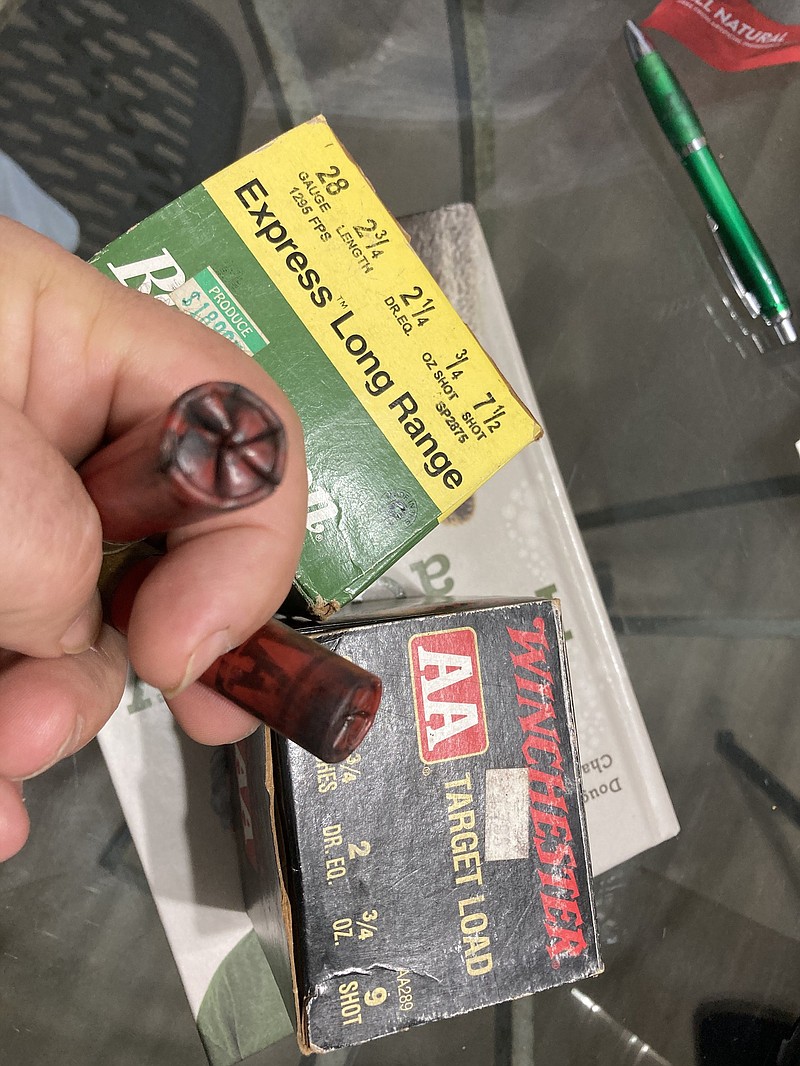 Reloading is an economical way to ensure a dependable supply of ammo for hard-to-find, expensive gauges like 28- and 16-gauge. You can tell a reloaded shell by the telltale burn marks on the tips. The shell on the left is nearing the end of its reloadable lifespan. (Arkansas Democrat-Gazette/Bryan Hendricks)

Loading your own shotgun shells is not economical if you shoot 12- and 20-gauge, but it is practical for tailoring ammo for specific applications.

Twenty years ago, when lead shot and primers were cheap, it was economical to load your own shells if you shot a lot of ammo in trap, skeet and sporting clays. Now, it costs as much to load as it does to buy factory shotgun ammo, and the selection of specialty ammo is so vast that you can buy anything that you can load yourself. Even Kayle Browning of Wooster, an Olympic medalist trapshooter, uses factory ammo.

On the other hand, loading your own shotgun shells gives you complete control over quality and consistency. Reloading is about the only way to obtain a steady supply of ammo for unconventional gauges, especially 16-gauge, 28-gauge and .410-bore.

Unfortunately, shotgun reloading is not for dabblers. You're either all in or you're all out. A good reloading press is expensive and it occupies a lot of space, as do powder, powder bottles, empty hulls and accessories.

Unlike reloading for metallic cartridges, you're not likely to load 20-40 shotgun shells a year. If you play shotgun games, you'll load hundreds. If you're a serious shotgun gamer, you'll load thousands. For that reason, it is the perfect activity for long, wet winter evenings when there isn't much else to do. Here's how to get started.

Recreational shooters and low-volume gamers will start out with a single-stage press. It performs all of the necessary functions one step at a time, one shell at a time. Each function requires a separate pull of the lever, and the user must move the hull to a different function station until finishing a completed cartridge. It takes a lot of time, but with practice, you will become fast. Even when I shot skeet competitively, I loaded all of my ammo with a single-stage press.

The Lee Load-All is the least expensive press. It is a compact little unit that is sufficient for the needs of the average hunter or for occasional clays busting.

I use the MEC Sizemaster press. It is user friendly, and the quality of its product is as good as the effort you put into it.

As per its name, the MEC Sizemaster resizes the base of a fired cartridge to factory dimensions. That means any gun will chamber and fire a Sizemaster round.

The first step is to place a spent shell in the resizing collet. One pull of the lever resizes the base and punches the spent primer from the primer pocket.

The next step is to install a fresh primer at the priming station.

The next station dumps the powder charge into the shell. There are many different propellants, but my favorites are Hodgdon Universal and Hodgdon Clays. I also like IMR Green Dot, especially for 28-gauge. For 16-gauge, I like IMR Blue Dot and Hodgdon Longshot.

After dropping the powder charge, install the the wad. Experimenting with wads is one of my favorite parts of shotshell reloading. It is interesting to see how different wads affect velocity and pattern density. Remington's Power Piston wad is a good all-around choice, but for target shooting I really like Remington's Figure-8 wad.

Seat the wad firmly against the powder charge and then move the shell to the shot charging station. Move the charge bar in the appropriate direction to drop the shot charge.

Crimping is the final step. If you have done everything correctly, the last pull of the lever should close your hull with a smooth, level crimp. Put that shell in a box and start the process anew with the next hull.

Unlike a single-stage press, a progressive press produces a loaded, crimped shell with every pull of the lever. Each pull rotates a hull through the various aforementioned stages, and it produces a lot of ammo quickly.

The biggest downside to a progressive press is the amount of time it takes to learn how to use it. You have to start with one shell at a time until there is a shell to occupy each station, which means you have to activate each function one step at a time until each slot contains a hull.

Inexperienced users will dump many ounces of shot and powder all over their work areas, on the floor and all over their shops. I didn't have the patience for it nor the tolerance for the mess. I sold my Hornady progressive without ever completing a load. I regret this because it would have been a really nice experience once I got the hang of it.

The reasons for reloading shotshells are myriad. Turkey hunters like to create special loads using tungsten super shot (TSS) and Hevi-Shot. Waterfowlers can load their own steel shot loads with the MEC Steelmaster. It is also a good way to recycle hulls instead of sending them to the landfill prematurely.

You can reload a hull as many times as you feel safe shooting it. An elderly gentleman in my skeet league at the United Sportsmen's Club in Jefferson City, Mo., reloaded his hulls well past the their discard date. His shells were so worn and split that he held them together with Scotch tape. Crimps opened and spilled shot pellets into his pockets. When it was his turn to shoot, he dipped a cupped hand into his pocket, poured shot into the hull and the pinched down the crimp with his thumbs.

Everybody always gave him a lot of space. He experienced misfires, but nothing catastrophic. And he shot very well.

What made it so funny is that the guy was very wealthy. There was no reason for him to be that cheap.

We, of course, strongly recommended greater prudence to safely enjoy a pastime that will provide a lifetime of enjoyment.