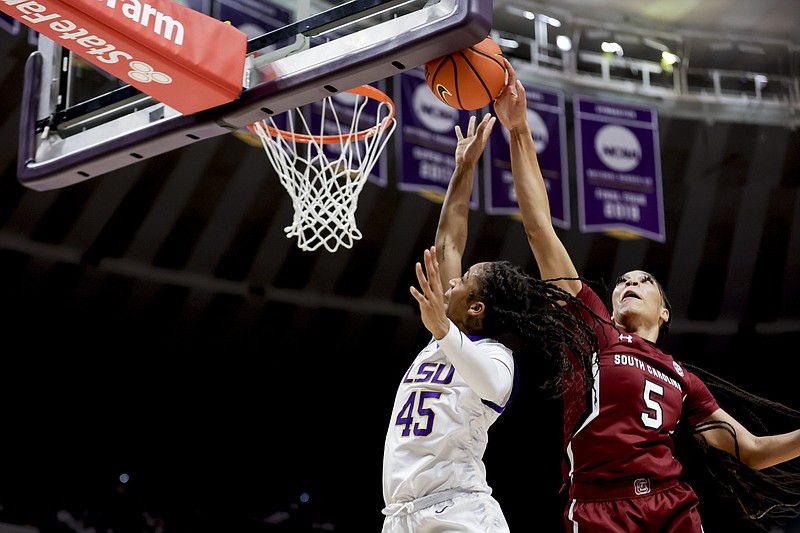 Zia Cooke scored 17 points and Destanni Henderson had 16 for the Gamecocks (14-1, 2-1 SEC), who have won two in a row since losing in overtime at Missouri in their SEC opener.

South Carolina trailed by six points at halftime but built a seven-point lead with 5:21 left. LSU (14-1, 2-1) twice got within three points but could not get closer.

Jailin Cherry's jumper with 13.2 seconds left got LSU within 64-60, but one last offensive rebound by Boston off a missed free throw helped South Carolina close out a game in which it dominated the boards 48-24.

LSU came out of the gate sizzling, hitting its first nine of 11 shots, and the Tigers led 29-18 midway through the second quarter. But the Gamecocks found some rhythm and got within 34-28 at halftime.

South Carolina pushed ahead 36-35 in the third quarter as LSU's offense went cold and led 47-44 heading into the fourth.

None of them could handle Boston.

KNOXVILLE, Tenn. -- Jordan Horston had 18 points and 13 rebounds, and Tennessee took charge in the second quarter to beat Texas A&M.

LEXINGTON, Ky. -- Rhyne Howard scored 17 of her 30 points in the fourth quarter and Kentucky beat Georgia.

The Wildcats (8-3, 2-0 SEC), who hadn't played since Dec. 19 with their first two conference games postponed because of covid-19, were 10 of 17 in the fourth quarter with a pair of three-pointers. Howard scored Kentucky's last nine points.

The Cardinals have won 13 in a row, and quickly pounced on a Panthers squad playing their first game since Dec. 22, forcing 24 giveaways in the first half alone for 18 points en route to a 40-13 cushion. Louisville (13-1, 3-0 ACC) ended up just four turnovers shy of tying the program record set against Northeastern Illinois on Jan. 13, 1992.

Emy Hayford had eight points for the Panthers (9-5, 0-3), while Rita Igbokwe had six points with 14 rebounds.

The Wolfpack (13-2, 4-0 ACC) dominated the first quarter to build a huge lead and never trailed. N.C. State shot 42%, hit 11 three-pointers and finished with a 53-40 rebounding advantage.

IOWA CITY, Iowa -- Veronica Burton scored 25 points and led Northwestern during an 11-3 run in the final minutes as the Wildcats beat No. 22 Iowa.

It was the sixth-consecutive win for Northwestern (10-3, 2-0 Big Ten), which hadn't played in nearly three weeks since having its game against Oregon canceled and two Big Ten games postponed. It was its third win in a row against Iowa (7-4, 1-1).

Burton was 6-of-13 shooting that included a pair of three-pointers and was 11 of 13 from the free-throw line. Melannie Daley added 22 points.

The general public was barred from the hastily arranged game between two teams that already met this season. The Beach (4-8) were beaten 100-79 at Pauley Pavilion on Nov. 15.

Bernard's points were one off his career high and his four three-pointers tied his career best. But UCLA's return wasn't without cost. Second-leading scorer Jaime Jaquez Jr. sprained his right ankle with 1:56 remaining in the first half.

BLOOMINGTON, Ind. -- Trayce Jackson-Davis had 27 points and 12 rebounds, and Indiana used stifling defense down the stretch to pull away for a victory over No. 13 Ohio State.

Ohio State was held to 30.8% shooting and committed 15 turnovers, including five in the last 6:41. The Hoosiers held a 41-33 rebounding edge.

MADISON, Wis. -- Johnny Davis had 26 points and nine rebounds and No. 23 Wisconsin defeated Iowa in a game that featured two of the nation's top three scorers.

Murray entered the night with a Division I-leading 24.5 points per game while Davis was third with 22.3 points per game. Davis was coming off a 37-point, 14-rebound performance in a 74-69 victory Monday at No. 3 Purdue, and Murray had 35 points and eight rebounds the same night in Iowa's 80-75 win over Maryland.

The University of Arkansas-Little Rock suffered its first lost in conference play Thursday night at Louisiana-Monroe.

Nikola Maric (24 points) and Isaiah Palermo (19) were the highlights for UALR (6-8, 1-1 Sun Belt Conference), combining for more than half of the Trojans' scoring.

ASU (10-4, 1-1 Sun Belt) was able to cut Louisiana-Lafayette's lead twice within the last five minutes of regulation, sending the game to OT with a deep three-pointer from Caleb Fields with 0.3 left in the second half.

Norchad Omier led the Red Wolves with 29 points and 17 rebounds. Markise Davis was ASU's only other scorer in double figures, with 11. 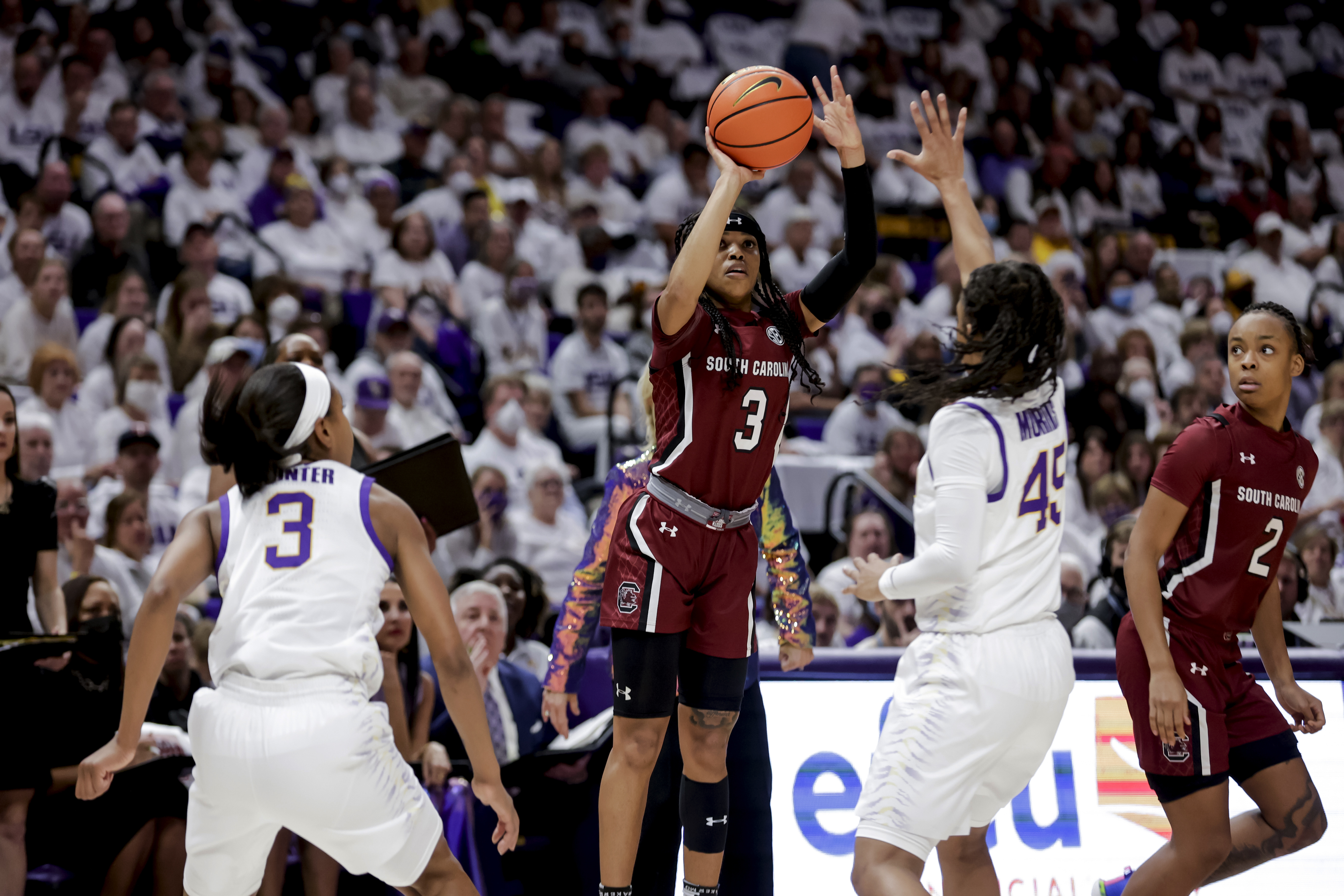 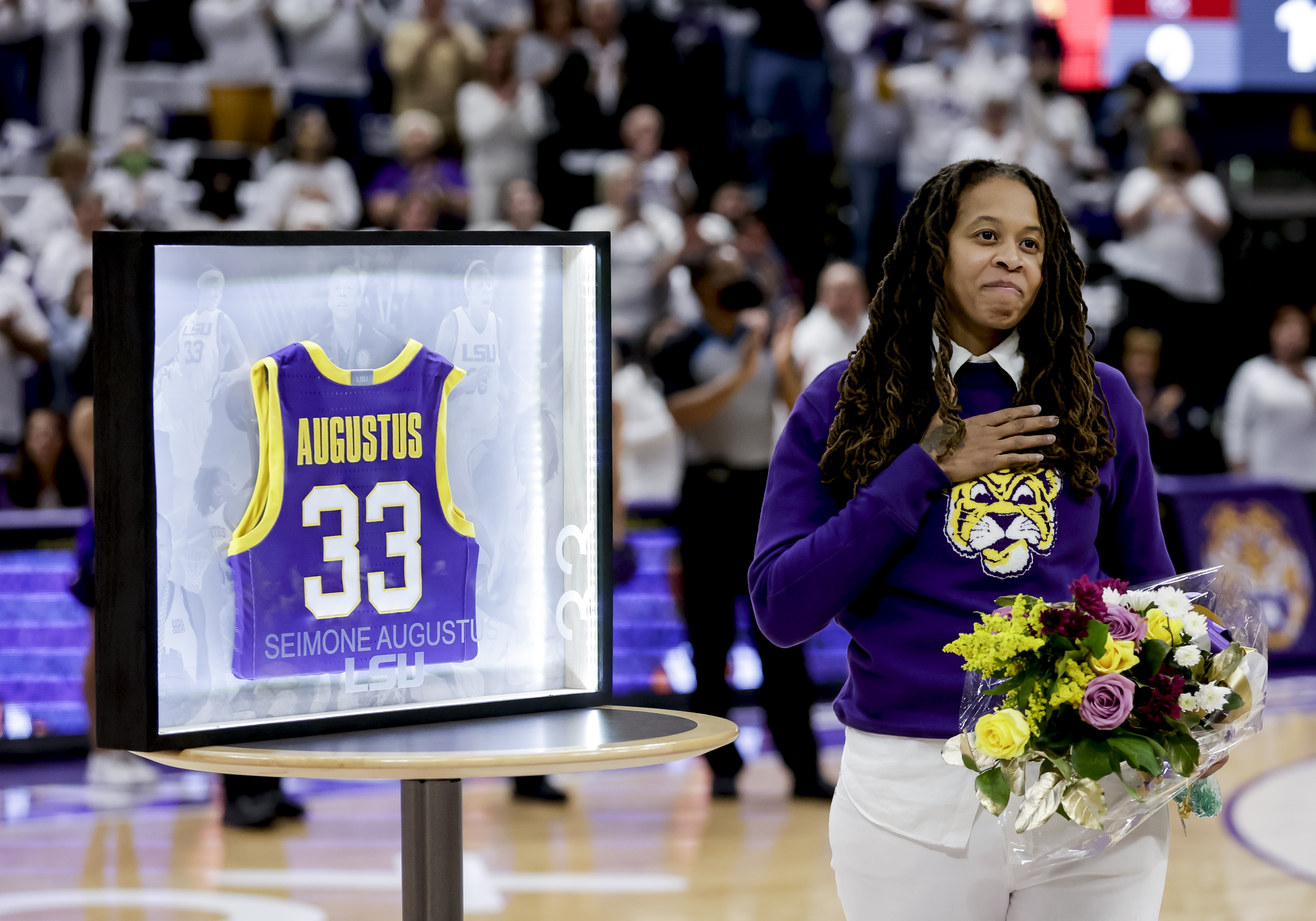 Seimone Augustus is honored by LSU in a ceremony prior to an NCAA college basketball game against South Carolina in Baton Rouge, Thursday, Jan. 6, 2022. (AP Photo/Derick Hingle) 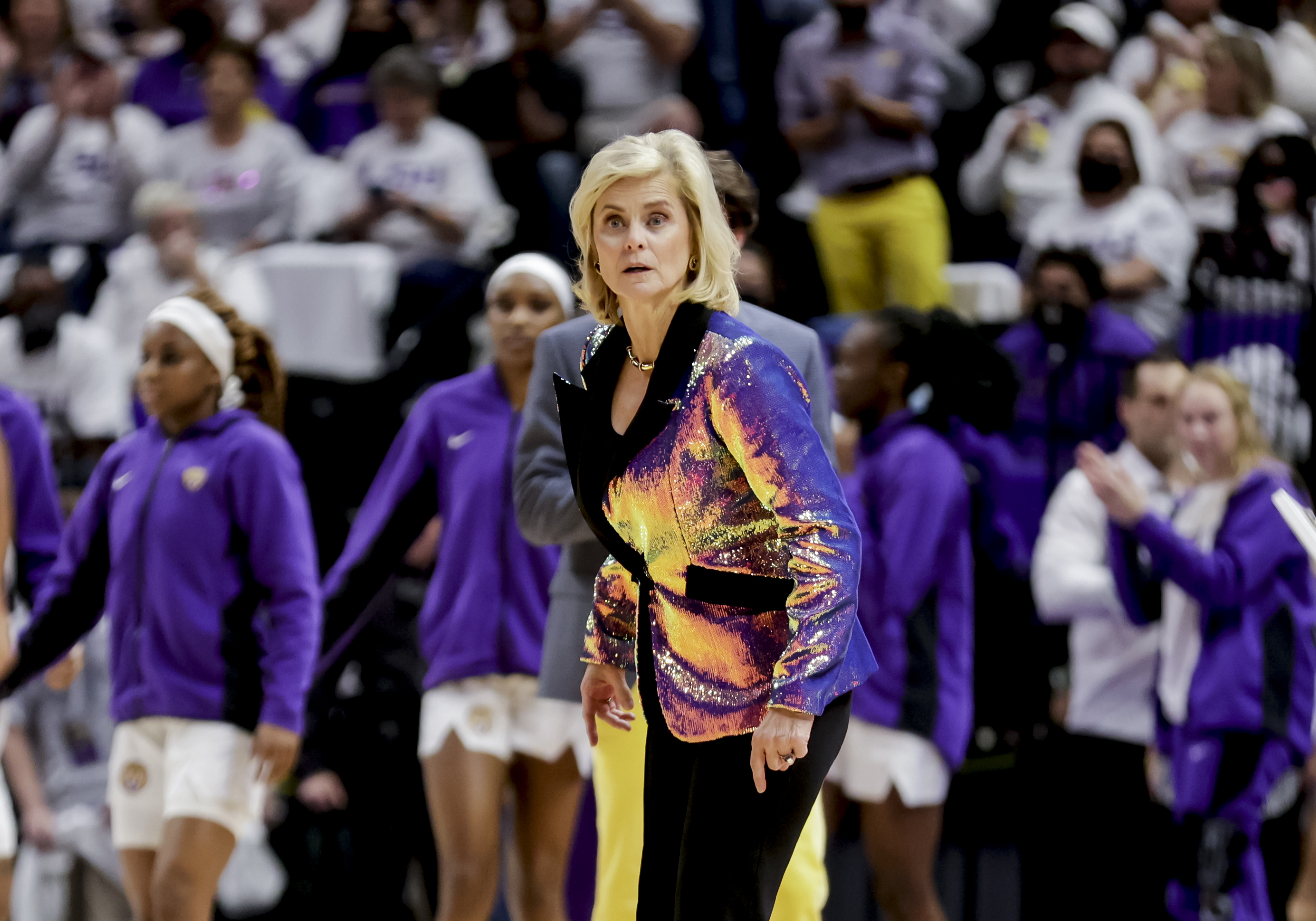 LSU head coach Kim Mulkey reacts to a play in the first half of an NCAA college basketball game against South Carolina in Baton Rouge, Thursday, Jan. 6, 2022. (AP Photo/Derick Hingle) 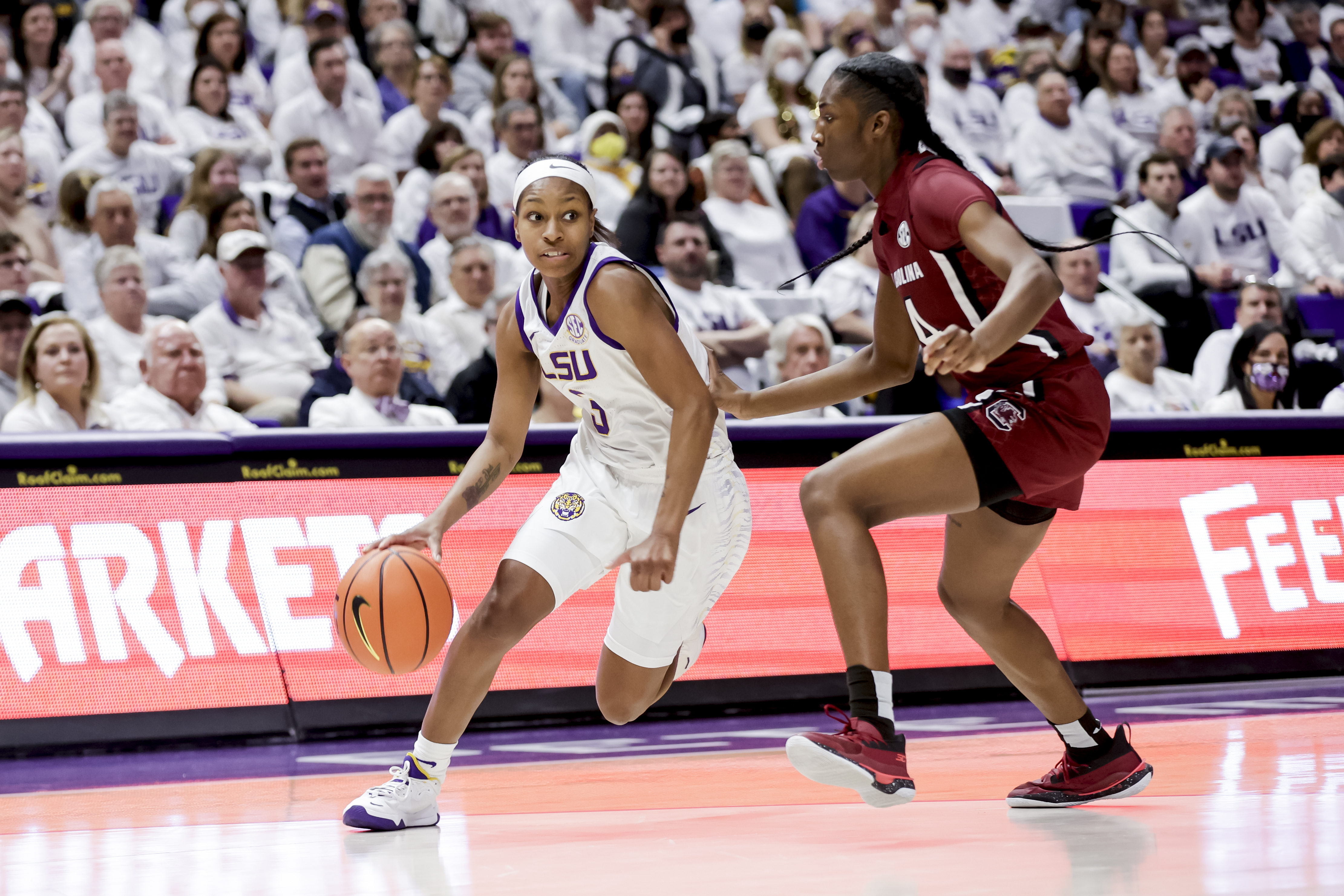