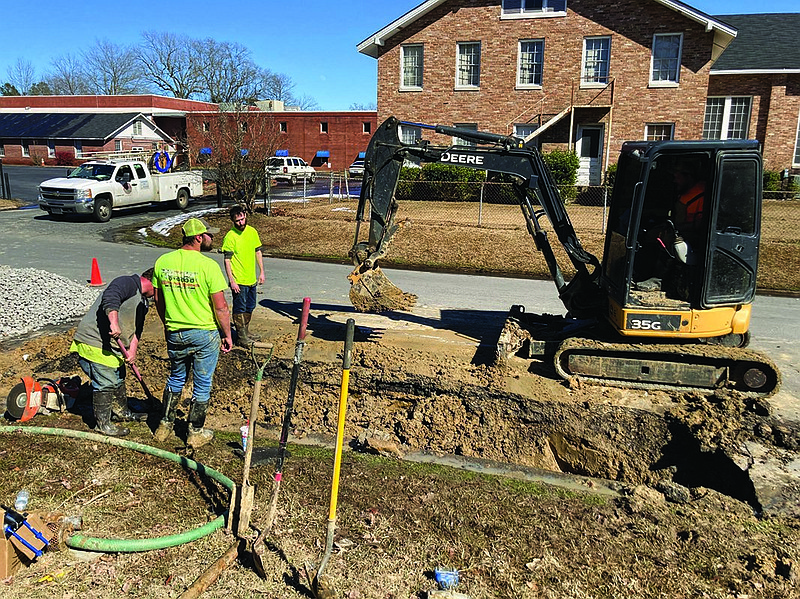 Liberty Utilities has reached a settlement with state agencies to avoid a repeat of last year’s water crisis. In this file photo taken in early March, workers repair broken waterlines that were damaged during the bitterly cold weather in February. (Pine Bluff Commercial File/Byron Tate)

Liberty Utilities and two state agencies have reached a non-monetary settlement agreement in response to last winter's water crisis that was blamed on the water utility's inadequate infrastructure.

The agreement, between Liberty's Pine Bluff unit, its state unit, the attorney general's office and the state Public Service Commission, will require Liberty to make significant investments in its infrastructure and overall operation in order to avoid a repeat of the collapse of its water system last year.

In mid-February, temperatures plummeted for a week, freezing pipes and causing widespread water pressure losses that crippled many operations in the city, including Jefferson Regional hospital, which had to stop taking patients, and the University of Arkansas at Pine Bluff, which had to move residential students to Little Rock.

In response, the state PSC and the attorney general's office weighed in on the utility's operations, saying they were concerned that the water company had not done enough to ensure a dependable supply of water for the city.

On Feb. 23, the PSC directed Liberty to address a number of issues relating to water leaks in its system that became apparent during the weather event. Liberty filed its report on cold weather issues associated with its water system on Feb. 25. Liberty also submitted the testimony of Liberty Vice President Michael Beatty in May and June.

Beatty said in written testimony that the root cause of the leaks experienced in the Pine Bluff area was the extreme winter weather, which saw several days of below-freezing temperatures.

The majority of leaks experienced during the winter storm were on customer piping, including 17 fire hydrants, Beatty said.

Baker said while she agreed that the winter storm gave rise to outages in the system, she believed the root cause of those outages went much deeper into the maintenance, operation and financial health of the systems, as well as a lack of preparedness on the part of Liberty.

"Proper maintenance is crucial to how a water system is able to respond during an emergency," said Baker in her testimony.

She used as an example Liberty's statement that it did not believe its two filters being down at Plant 1 between Oct. 1, 2020, and Feb. 25, 2021, was a significant contributing factor to the low pressure during the winter storm.

"It is clear that the unavailability of a good portion of the operating capability of Plant 1 was a major factor in the inability of Liberty-Water to respond to and counteract the low-pressure outages which occurred on the systems in Pine Bluff," Baker said.

She also pointed out the Water Aging Infrastructure Plan, prepared by McClelland 5 Consulting Engineers in September 2020, contained a detailed list of maintenance and upgrade needs on the Liberty system. The engineering company's findings, Baker said, included clear findings that said that, without maintenance and upgrades, certain areas of the systems could experience problems in an emergency.

"It is incumbent on Liberty-Water to maintain its systems and equipment in a manner such that outages and emergencies can be managed in a timely and efficient manner," Baker said.

After extensive discussions, an agreement was reached between the parties.

The settlement acknowledged that, while the primary cause of the low pressure experienced in February was increased demand resulting from leaks, the parties agreed that certain actions by Liberty were necessary to protect against the future recurrence of similar events. In response, Liberty agreed to 24 measures.

One of those measures was to create the newly formed Customer Advisory Panel to improve stakeholder communications.

The panel members were chosen to represent Liberty's customer base in the Jefferson County area. The panel includes representatives of residential and commercial customers, limited-income customers, community leaders and government officials who can speak on behalf of the residents of Jefferson County.

Investments in leak detection technologies will be made by the company as well as the installation of water meters that can be automatically read.

Liberty said it expects the project to be completed in 2024, assuming there are no supply chain issues that disrupt the availability of AMR meters. The percentage of AMR meters installed, and the percentage of meters to be installed each year until the project is completed, along with the cost estimates for future years, is approximately $1.5 million for 2021 followed by approximately $1 million each additional year through 2024.

Liberty has also already acquired and installed six new portable pressure monitoring devices on fire hydrants in Pine Bluff to allow the utility to see any decrease in pressure and to monitor leaks more rapidly.

Discussions with the city of Pine Bluff and its code enforcement division have been conducted in order to develop a final "Abandon Service Plan." Court documents state that Liberty intends to reinforce the need to abandon services to vacated, vacant and abandoned premises. This will eliminate piping that is susceptible to freezing temperatures, and the work will also help the company avoid water theft.

McClelland Engineering's recommendations to replace undersized lines will also be followed by the company. Liberty will continue with the goal of replacement of all galvanized 2-inch pipe by the end of 2025.