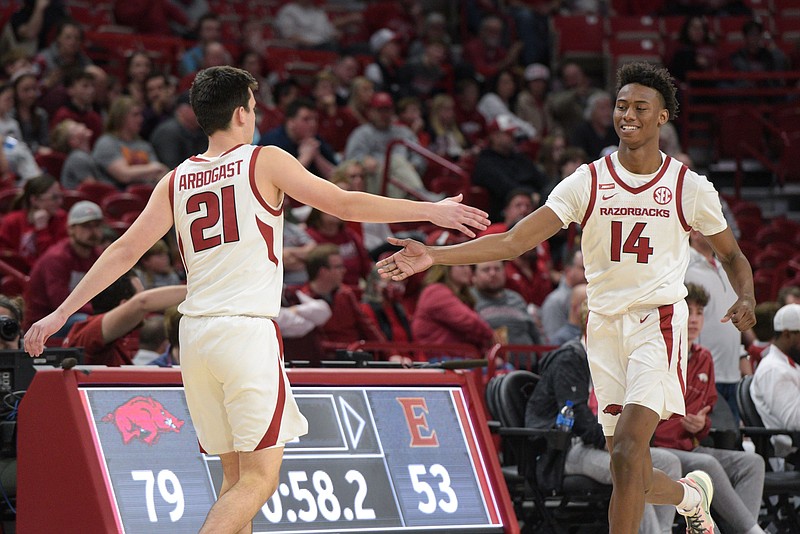 Sophomore guard Jaxson Robinson (14) transferred to Arkansas from Texas A&M after last season. He and the Razorbacks travel to College Station, Texas, to face the Aggies on Saturday. (NWA Democrat-Gazette/Hank Layton)

FAYETTEVILLE — No University of Arkansas basketball players from two years ago — when the Razorbacks last played at Texas A&M and lost 77-69 — are still on the team.

But there is one current Razorback who has played in Reed Arena.

Robinson has started the last three games going into Arkansas’ visit to Texas A&M at noon on Saturday.

The Aggies have a former Razorback in Ethan Henderson, a senior forward from Little Rock Parkview who transferred from Arkansas to Texas A&M after last season.

Musselman was a long-time NBA head coach and assistant before breaking into the college ranks.

“I can tell you in the NBA when somebody plays against their old team, there’s a little extra motivation for sure,” he said.

Robinson, who turned 19 on Dec. 3, is Arkansas’ youngest player. He should be a true freshman, but decided to graduate a year early from Ada High School and signed to play at Texas A&M last season.

It was a tough season for the Aggies and Robinson. He was among the Texas A&M players who missed games and significant practice time because of covid safety protocols.

The Aggies finished 8-10 and had nine games canceled, including at home against the Razorbacks.

Robinson decided he needed a fresh start and Arkansas was a natural transfer destination because Musselman had recruited him heavily as a high school player. He averaged 2.1 points, 1.1 rebounds and 9.7 minutes last season in 14 games.

“I’m excited and looking forward to playing A&M,” Robinson said last summer. “I feel like it’s a little personal after the season I had. But it’ll be fun.”

Robinson played in six of the Razorbacks’ first 11 games and averaged 8.9 minutes.

Scoring nine points in seven minutes in Hofstra’s 89-81 victory over Arkansas earned Robinson a start in the next game against Elon.

Robinson responded with a career-high 14 points in 20 minutes to help the Razorbacks beat Elon 81-55.

Musselman gave Robinson more playing time in the first two SEC games. He had 6 points and a career-high matching 7 rebounds in 32 minutes at Mississippi State and 3 points, 3 rebounds and 3 assists in 31 minutes against Vanderbilt.

“We feel like from a consistency standpoint he can shoot a little bit better,” Musselman said. “Maybe draw some more free throws attempted.”

Robinson is 3 of 3 on free throws, all against Elon.

“We need Jaxson to continue to have his game evolve to kind of what our identity’s been, which is attacking the rim,” Musselman said of Arkansas ranking 11th nationally in total free throw attempts with 316 as of Wednesday night. “I think he’ll do that.

“He’s a guy that is watching film and he’s a guy that’s in the gym on his own working on his game. Certainly his best basketball is ahead of him because of his attitude and his willingness to get better.”

Robinson’s mother, Brandi Robinson-McWilliams, played for Missouri State and Southeastern Oklahoma State, where she was inducted into the athletics hall of fame. His aunt, Crystal Robinson, also played at Southeastern Oklahoma, then in the WNBA. She’s a WNBA assistant coach with the Dallas Wings.

“As a young man, I really liked him,” Musselman said of recruiting Robinson. “I liked the fact that his mom was a great communicator, and that she played, had a background in basketball. His mom’s sister played in the WNBA.

“So I think that as a family they understand the game. He’s just a guy that is a pleasure to be around.”

“Defensively, he continues to get better,” Musselman said. “Jaxson’s not known, necessarily, as a defender, but I think he’s buying into the system and he’s trying to use his length.

“He needs to do a better job of getting through screens, which we’ve addressed with him and will continue to teach him technique on that.

“But a lot of really bright spots with what Jaxson’s done. Not just from shooting, but from a lot of different perspectives.”

“When Jaxson committed here, we felt like he was going to be a developmental piece,” Musselman said. “You look down the road into next season and I think with the experience he’s going to get this year, it’s really important for his development.

“He’s gotten some starts under his belt of late, because he earned it based on how he’s played. I think that he’s an important part today, and he’ll be an even more important part as we look into the future and develop a roster for next season as well.”

WHEN Noon Central on Saturday 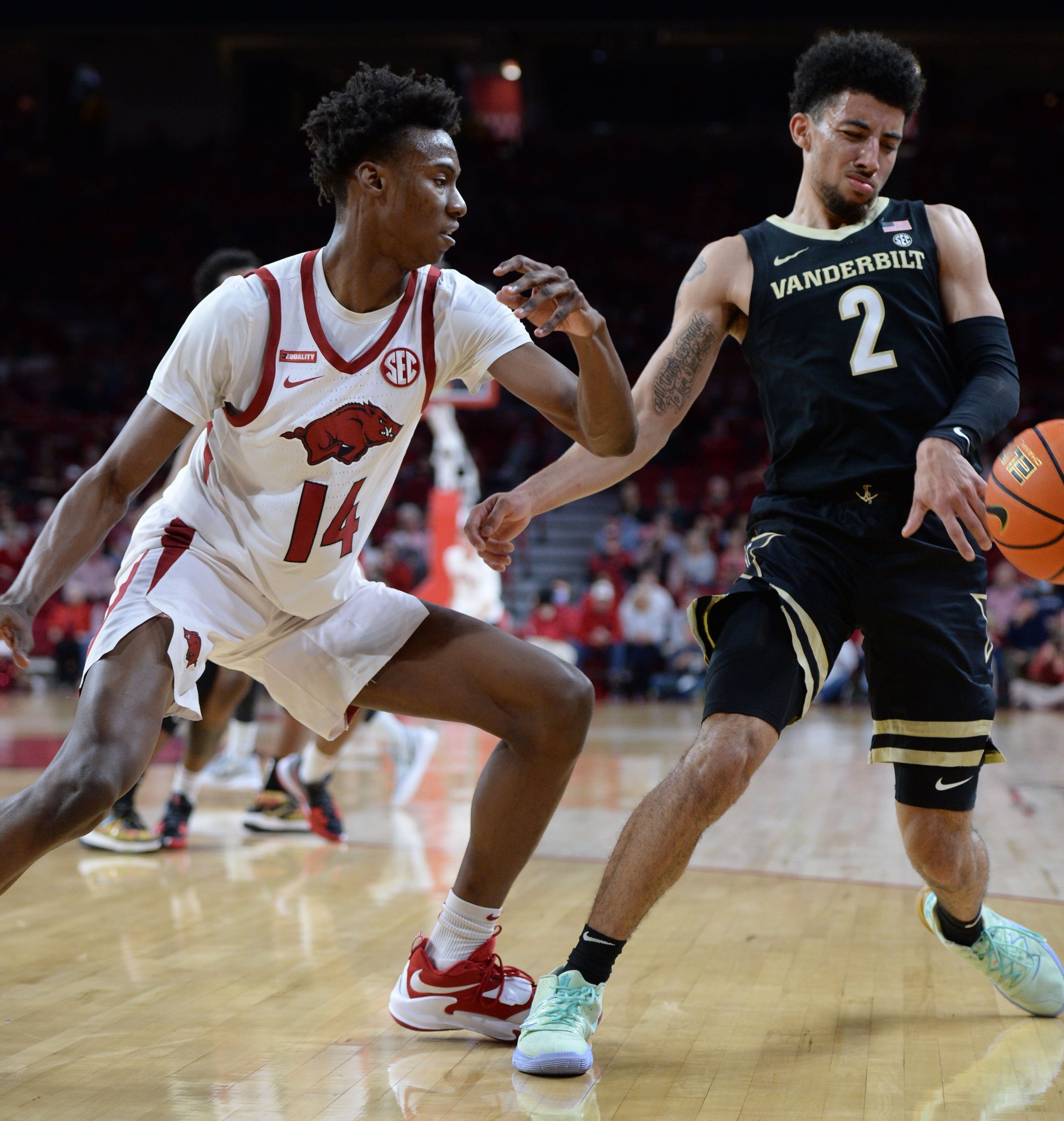