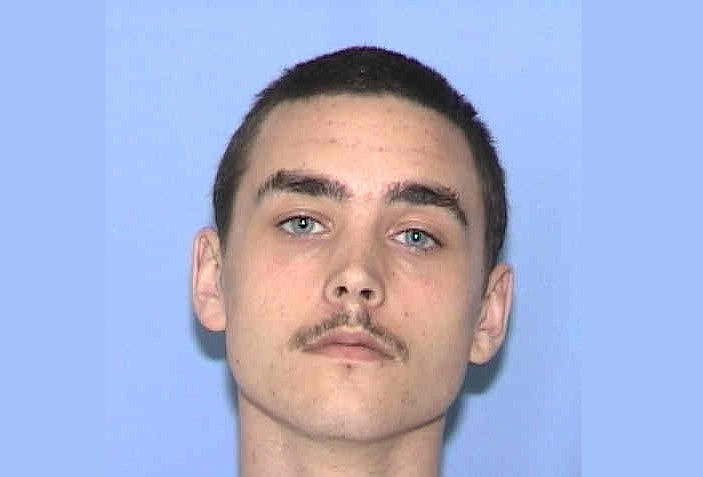 Justin William Thabit is shown in this circa 2004 booking photo.

A Little Rock man charged in federal court with multiple drug and firearms offenses must remain in jail to await trial despite a federal judge's order to suppress the physical evidence in his case.

Thabit was arrested June 18, 2019, after law enforcement officers from Pulaski County, Little Rock and the U.S. Marshals Service -- under authority of a search waiver -- conducted a search of a home in Little Rock where they seized drugs and guns, including a shotgun with a barrel shorter than 18 inches and no serial number. Authorities searching for Thabit after he absconded from his parole on a 2002 second-degree murder conviction found him at the home of his girlfriend in Little Rock following a tip from a confidential informant, according to court documents.

Because Thabit was on parole he was subject to a waiver of the legal requirement that police obtain a search warrant to search his home, his vehicle or his person.

But after hearings last summer and last month in which Thabit's attorney, Michael Kaiser of Little Rock, successfully argued that the search was illegal because the home police searched was not Thabit's, Marshall ordered that all physical evidence from the search be suppressed, leaving government prosecutors with only Thabit's statements to police after he was taken into custody as evidence of his guilt.

Thabit, who was once affiliated with the John Barrow Blood street gang, was on parole for the October 2001 beating death of James Medley, 21, a fellow gang member, during a gang initiation in the parking lot of the Chateau Apartments on Asher Avenue. Sentenced to 26 years in prison by a Pulaski County judge, Thabit was released on parole in 2016, then returned to prison in 2018 on a parole violation and was again released on parole in March 2019.

After his arrest in July 2019, Thabit was federally indicted on four felony offenses: felon in possession of a firearm; possession with intent to distribute methamphetamine; possession of firearms in furtherance of a drug trafficking crime; and possession of an unregistered firearm. At a February 2020 detention hearing before U.S. Magistrate Judge Beth Deere, the judge ordered him detained as both a danger to the community and a flight risk.

Kaiser had requested that the matter of Thabit's detention be revisited after Marshall's order suppressing the physical evidence seized during his arrest on the grounds that new information -- the suppression of the evidence -- had arisen since Thabit's previous detention hearing.

Assistant U.S. Attorney Cameron McCree objected to reopening the matter on the grounds that even without the physical evidence, the government believed it has enough evidence for conviction on the drug trafficking charge and intends to move forward with Thabit's prosecution. McCree noted that Thabit's plan to be released to the custody of his mother was the same plan rejected by Deere.

"Most of the response deals with conduct from over 20 years ago," Kaiser said at Tuesday's hearing as he argued for his client's release. "He was a teenager. He's now an adult in his 40s, he's clean and sober and has been incarcerated for 2½ years."

In her order, Ervin noted that no case law exists in the 8th Circuit Court of Appeals -- of which the Eastern District of Arkansas is a part -- to address detention in the face of evidence suppression, but she said in the 6th Circuit, case law there holds no requirement exists to reopen a detention hearing on the basis of suppressed evidence and that the suppression ruling was not material to whether Thabit's release would now pose less of a danger to the public or of flight.

The U.S. attorney's office has appealed Marshall's suppression ruling to the 8th Circuit.

Kaiser said Thursday that he will appeal Ervin's ruling "as soon as possible."

"My client has been sitting in jail for 2½ years already," Kaiser said. "The whole point of bond is to make sure the person shows up for court and to prevent flight. Well, he's incapable of flight. They snatched him up within an hour the one time they looked for him. ... They're holding him on the slight hope the Eighth Circuit reverses."