McCord retires in Siloam Springs after 40 years in banking 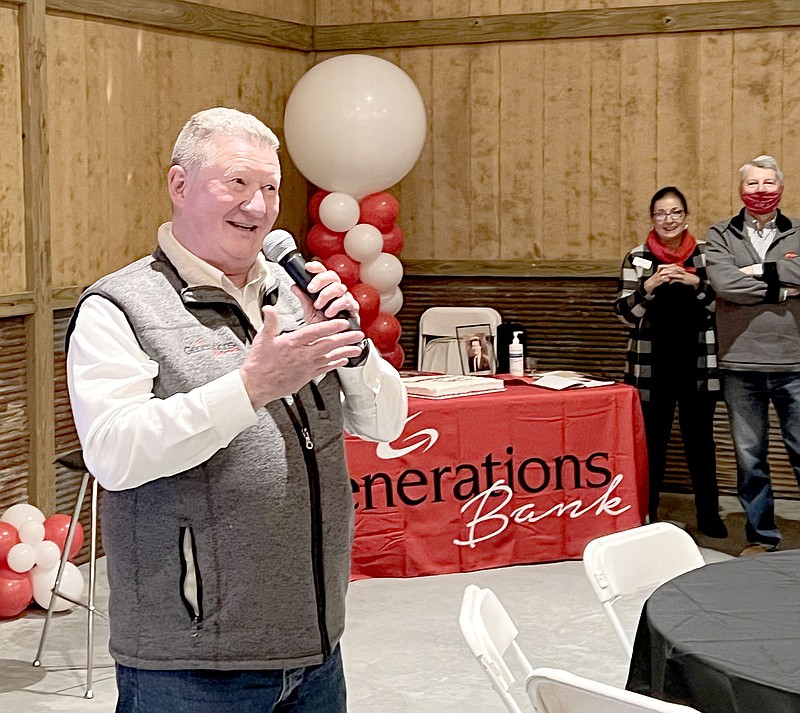 Graham Thomas/Herald-Leader Tim McCord speaks during a retirement reception in his honor Monday at the Torres Barn. McCord is retiring after nearly 40 years in the banking business.

SILOAM SPRINGS -- Tim McCord started his career in the banking world on Jan. 4, 1982, and he ended his career exactly 40 years later.

McCord's last day at Generations Bank was Tuesday, he said. A retirement party was held Monday at the Torres family barn.

McCord said he grew up in Blackwell, Okla. He attended college at Central State University (now the University of Central Oklahoma). He initially majored in computer science and math but switched his major to business.

While at Central State University McCord served on the student senate. McCord said it was this service that helped him land his first job at First National Bank of Oklahoma City.

David Jones, who hired McCord, was also a part of the student government at Oklahoma State University. Jones had been taking postgraduate courses at Central State University where he had read about McCord in the student paper and remembered him when McCord applied for a job at First National.

McCord was the first person hired at First National who did not have a degree from the University of Oklahoma or OSU.

Bank failures and a new position

The two best offers McCord received were from First National and The Western Co., an oil company, he said. McCord said he gave banking a try because the hours were better.

McCord was hired as a Financial Systems Analyst for a new department composed of financial analysts and computer programmers.

"It was a forerunner of data mining," McCord said. "That's where I learned financial modeling. We used a program called VisiCalc on an Apple 2C."

The VisiCalc program was a forerunner to Excel and was the first computer of that kind in the bank, McCord said.

It was a fortuitous decision because six months after McCord began working at First National the oil bust happened on July 4, 1982, he said.

"Since the problem was regional and all lenders jumped ship and left the city," McCord said. "They were pleading for warm bodies. I was able to make the change. I wanted to have lending experience."

After a year, the McCords wanted to get back out in the community and leave the Oklahoma City area, he said.

McCord said he made a list of the perfect place to live with amenities like a university, diverse economy, a lake and that was pretty. Siloam Springs offered everything McCord was looking for except a lake, but there were lakes in surrounding areas so the family decided to move, he said.

Another reason for the move was that McCord wanted a community that would give him the opportunity to volunteer.

"When you're in a big city market and work in a bank, local chambers and organizations only attract high level officers in the bank," McCord said. "You come to Siloam Springs, and they welcome everyone to contribute and make a difference in the community."

McCord started at Arkansas State Bank in 1987, he said.

McCord recalls how when Fridays came and workers from Allen Canning Co. and Simmons Foods would come in during lunch to cash or deposit checks, everyone, including McCord and the bank president, would run teller lines to process those payments.

Around 2004, Arkansas State Bank was sold to Liberty Bank, McCord said. He worked there for about a year as the manager of the Siloam Springs branch before he decided to move on.

"At one point the owner of the bank, he wanted young and pretty on the front desk," McCord said. "So the person that that impacted the most was someone who wasn't young. That requirement led to me deciding it was time to make a change."

Around that time Signature Bank wanted to establish a branch in Siloam Springs so McCord went to work there along with Steve Wilmott and Beverly Lesgarde.

During the Great Recession, Signature Bank had to shrink and spun off the Rogers and Siloam Springs branches to Generations Bank, which owned stock in Signature Bank, McCord said.

Memoirs of a banker

When asked about some of his more memorable moments during his career, McCord spoke about some highs and lows. When First National failed, McCord remembered pulling all-nighters to come up with packages to attract capital.

"In the financial systems side we generated scenarios as to how the bank would survive," McCord said.

McCord said he remembered people in suits from the Federal Deposit Insurance Corp. coming in to examine the bank's paperwork.

Another memorable moment in McCord's career was Y2K, he said. McCord was one of the few who owned a computer, so he was made IT director.

As part of a committee where the community was assessing risk, McCord met at the chamber with representatives from the city and utilities and discussed the situation. Everyone compared notes and came to the conclusion that everything would be alright, McCord said.

Y2K was predicted to cause severe computer problems, and some experts said it could cause problems with the economy when Jan. 1, 2000, came. McCord said all of the upgrades done on the computer systems around that time were enough to ensure there would not be any problems.

"It's gotten to the point where the government wants to tell you who to make a loan to and who not to," McCord said. "What was intended to protect the consumer now it takes forever to go through the process."

McCord has been a long-time volunteer with a number of different organizations.

McCord is currently the chairman of the board of Choices Pregnancy Center, the hospital board and the Roy Chesney Fund, he said.

He also intends to continue volunteering but maybe not as heavily as he once did.

"It's nice when you can choose what you want to spend time with and not have to come into the office," McCord said. 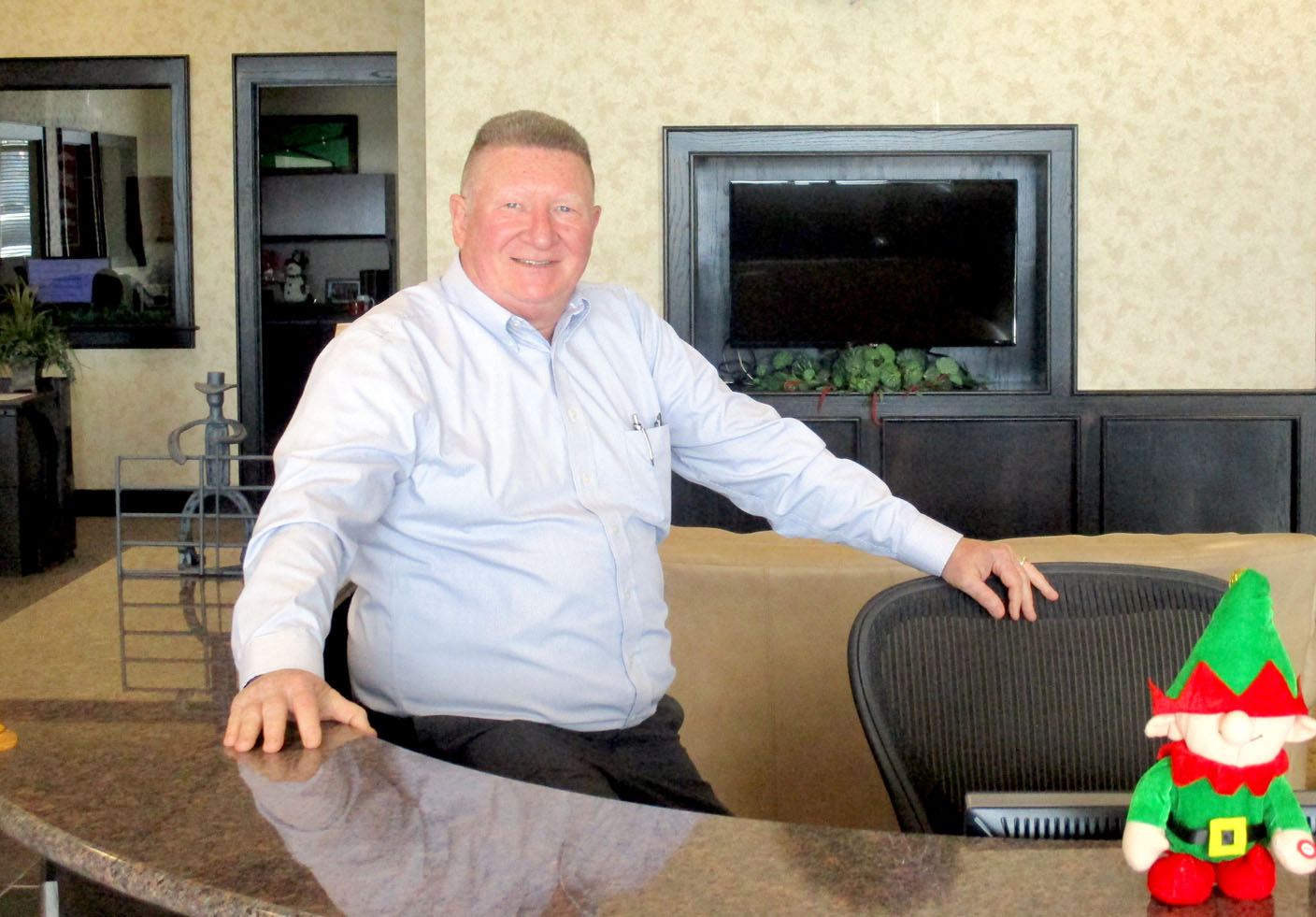 Marc Hayot/Herald-Leader Tim McCord stands proudly on the eve of his retirement from the banking industry after 40 years. McCord started his career off in Oklahoma City and eventually moved to Siloam Springs where he has helped Generations Bank as well as the city itself grow.