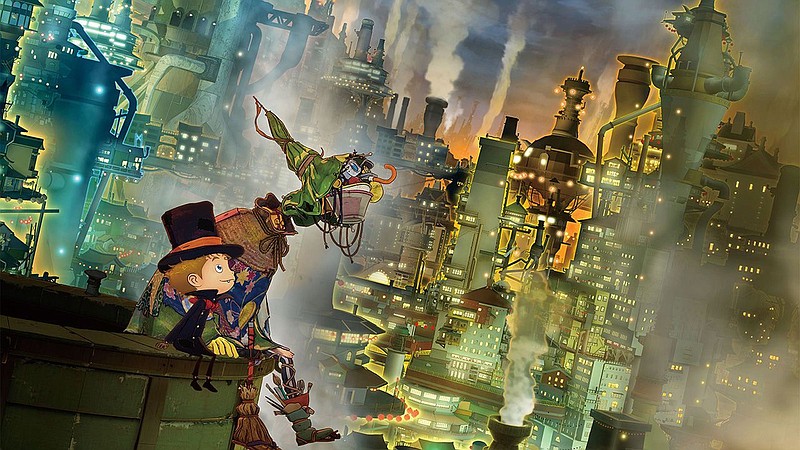 Rating: PG, for violence, some action and thematic elements

In Japanese with subtitled English and dubbed English versions

"Poupelle of Chimney Town" manages to do something most people would tell you is impossible: Feel empathy for a pile of smelly trash. It's a fitting feat for a film that encourages you to keep believing in your dreams even if everyone else belittles them or tells you you're wrong.

Based on a picture book by Akihiro Nishino, who also wrote the screenplay, "Poupelle of Chimney Town" is set in a city with so many chimneys that a thick layer of dark smoke hangs between it and the sky above. The authorities have all residents convinced that there is nothing beyond the smoke -- or outside the city limits -- and those who believe otherwise are persecuted as heretics.

But Lubicchi (voiced in English by Antonio Raul Corbo) -- a young chimney sweep who recently lost his father -- believes in the existence of stars and dreams of being able to see them one day. After he befriends a sentient, anthropomorphic pile of garbage that he names Poupelle (Tony Hale), he becomes intent on proving it.

There's a rustic charm to the stylized 3D CG animation, particularly in Lubicchi's design and movements. There's also a playfulness in the way the film toggles with perspective in depicting the dense, smoky, steampunkish town, and in sequences that are reminiscent of video games. Director Yusuke Hirota even throws in a lively, Halloween-theme musical number that likely will appeal to kids.

The strength of Nishino's adaptation is in its heart. "Poupelle" takes big emotional swings in depicting Lubicchi's relationship with his father and his new friendship with Poupelle. And Poupelle is an endearing amalgam of the Tin Man and Scarecrow from "The Wizard of Oz."

Less effective is the film's attempt to channel story time, which for anyone but the youngest viewers will make parts of the narrative feel repetitive.

The film also takes aim at engaging with larger themes in both subtle (the perils of pollution) and overt (stifling oppression) ways. The most intriguing -- if underdeveloped -- is the critique of capital and centralized banking presented within the late exposition surrounding the origin story of Lubicchi's smoky town.

But those shortfalls do not distract from "Poupelle's" most resonant messages. Even in a world where people would rather stifle imagination, it's important to keep looking up. "Poupelle" serves as a good reminder for viewers of all ages to not let their fears -- or those of others -- keep them from pursuing their dreams.