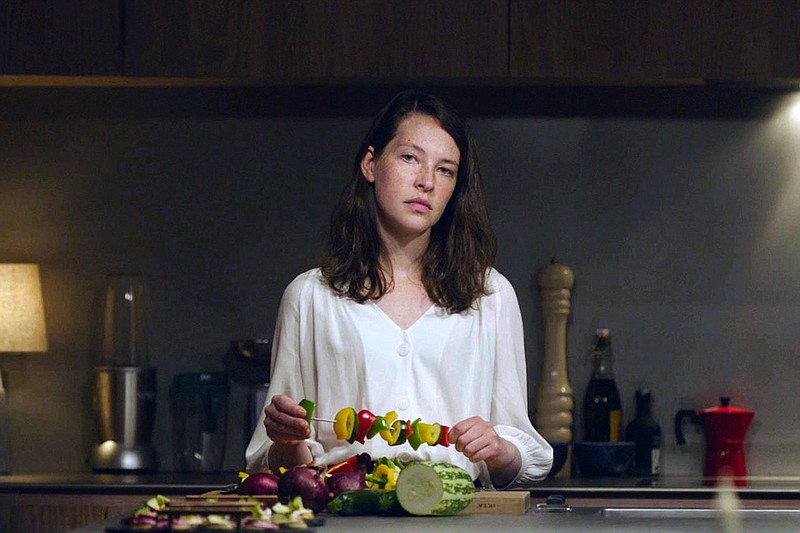 In Welsh and English with English subtitles

Available to rent or buy from most streaming services, including Apple TV and Amazon Prime.

A small, fancy dinner party is being assembled by Delyth (Caroline Berry), on orders from her lout of a husband, Gwyn (Julian Lewis Jones), a cozy politician with a sizable ego, in order to facilitate a mineral rights discussion between Euros (Rhodri Meilir), a slimy-rich prospector, and their more simplistic farmer neighbor, Mair (Lisa Palfrey), whom they want to convince to sell in order to reap a fat profit. Needing help to put the dinner together, and not getting any offers from her vile grown sons, Guto (Steffan Cennydd), an addict; and, Gweirydd (Sion Alun Davies), a predatory type, Delyth brings in young Cadi (Annes Elwy), up from the nearby village to help things run smoothly.

Only, Cadi, generally a sweet-faced innocent, doesn't quite seem herself: She barely talks, for one thing, and seems easily distracted -- a trip to change her shirt in Delyth's closet leads to a sustained session of her trying on her employer's jewelry and giggling at herself in the mirror. It's also increasingly clear that she brings menace to the household: Gwyn keeps hearing high-pitched wailing in his ears when she gets near him; she takes the jonesing Guto to the forest to snatch mushrooms for him to inject into his veins; she retches into one tray of food before popping it into the oven, and so forth.

After Mair reminds Delyth of the warnings they always heard as children not to climb the rise for fear of angering "her," it becomes more clear that the avarice and lack of environmental care of Gwyn and his family -- living, as they do, in a brand-new, ultramodern mansion with materials imported from all over the world -- has awakened a vengefully violent retribution, in the form of the formerly demure Cadi, now overtaken by the dark magicks of the woods, and proceeds to systematically dismantle the family members, either by her own hand, or by having them turn on one another.

Its environmental message, while more than welcome, is perhaps made a bit too bludgeoning (a fair word choice) by the end -- Jones' inspired atmospherics and haunting visual style work better in more shaded bands of esoterica -- but as a piece of well-crafted, disturbing agitprop, it's a worthy enough banquet of bloody recrimination.