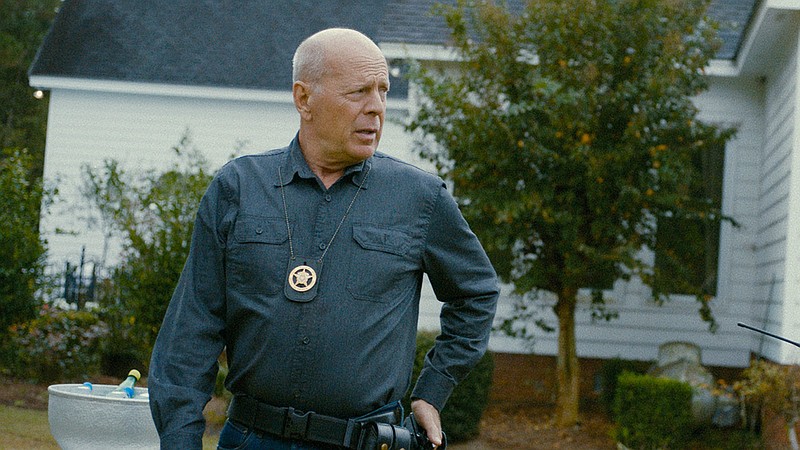 Ben Watts (Bruce Willis) is a former NYPD detective who becomes sheriff of a rural Georgia county and faces the biggest challenge of his faltering career in the action movie “American Siege.”

Rating: R, for violence, language throughout and some drug content.

These days it seems Bruce Willis' career is a little less John McClane and a little more Steven Seagal as the 66-year-old action star cranks out middling shooter movies. And "American Siege" will give audiences about what they'd expect from a January action movie.

The film stars Willis as a rural Georgia sheriff named Ben Watts. And apparently Watts spends most of his days drunk and sleeping with Janet Jones' character, deputy Marisa Lewis.

It quickly becomes apparent Watts is a crooked sheriff bought by a wealthy man named Charles Rutledge (Timothy V. Murphy). As the film untangles just how deep Rutledge's crimes go with a surprisingly patient pace, audiences will either become more invested or shrug and keep munching their popcorn because they're comfy and don't want to get up to leave.

"American Siege" opens with three people taking a pharmacist named John Keats (Cullen G. Chambers) hostage in his own home. The group is made up of a convict, a conspiracy theorist and a grieving sister, all of whom demand answers about a girl who disappeared 10 years prior.

This is a movie where not a single person gives a convincing Georgian accent, and most people should be glad Willis didn't even try. Because Southerners will probably cringe at how some of these actors talk.

The hostage takers intentionally alert law enforcement (including the FBI somehow) of their actions, hoping it'll send up enough red flags they'll get the attention of whoever knows what happened to the missing girl.

As Watts arrives, he discovers their demand for information and reveals he investigated the case himself (for whatever it's worth as he's a corrupt sheriff). He calls Rutledge for information, and the criminal "mastermind" tells his sheriff to stop asking questions about the missing girl, or he'll be killed.

From there, the film focuses almost entirely on the standoff, with Rutledge's men trying to get into the house unsuccessfully, Keats revealing how deep the criminal rabbit hole goes, and Watts "struggling" to decide if he wants to be the hero this script demands he be.

The film straddles the line of mediocre action movie and "so bad it's good" chucklefest. Willis appears present to get his paycheck and can hardly be bothered to show any real hustle in "American Siege."

During the climactic final showdown, he calmly walks around shooting people. No diving or hiding behind trees, just patiently walking up behind gunmen and pulling the trigger point blank. Rutledge gives Watts' only real backstory during an extended tirade, the quality of which matches that of a cut scene from a Nintendo 64 game. He was a washed up drunk who lost every job from NYPD to Walmart security guard. But the movie doesn't have time for those kinds of flashbacks.

The lack of motion (and emotion) on Willis' part seems like it came straight out of Seagal's action movie playbook ("Flight of Fury," not "Under Siege"). Though his dry attitude will probably earn at least one or two chuckles from viewers. His humor derives from the fact it's clear Willis wants to get paid and go home.

The hostage takers have some ridiculous and cliche lines, though they're certainly not alone in that regard. Their biggest sin is just taking "American Siege" so seriously. The movie would have been more fun if everyone had really cut loose and gone wild with their performances, over-the-top cheese.

Some moments from "American Siege" are so ridiculous they hardly seem real, especially when the conspiracy theorist finally gets into Keats' safe. It doesn't even make physical sense how what's inside the safe actually fits in there.

To director Edward Drake's credit, he kept the movie to a tight 100 minutes. It's almost like he knew exactly how much Play-Doh he had and didn't try to stretch it too thinly.

"American Siege" wants to be "Justified," but it has neither the charm nor the intelligence to accomplish that goal.

As far as January action flicks go, this isn't the worst. But it's far from great. "Die Hard" Bruce Willis fans probably won't be miserable if the popcorn is crunchy and the cola is cold. For everyone else, lasciate ogni speranza, voi ch'entrate.

"American Siege" opens in theaters and online for purchase today.