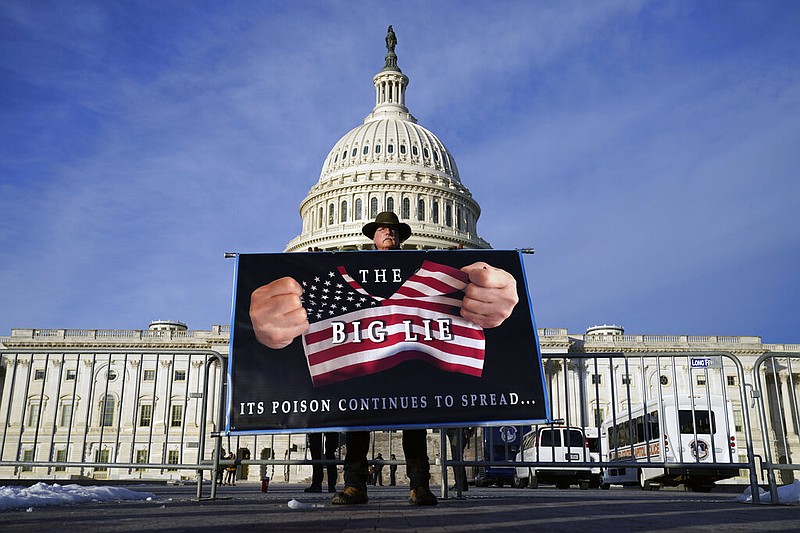 A protester holds his sign at the Capitol in Washington on Thursday, Jan. 6, 2022. "The Big Lie" refers to the claim by former President Donald Trump that the 2020 presidential election was stolen. The claim inspired Trump supporters to rally at the Capitol on Jan. 6, 2021, as the votes were being certified. (AP/Evan Vucci)

University of Alabama and Smithsonian Institution officials are working to capture the faith-based fervor on display Jan. 6, 2021, in Washington.

A new website illustrates the religious dimensions of the Stop the Steal Rally and the storming of the Capitol that followed it.

The digital project is a collaboration between the University of Alabama's Department of Religious Studies and the Smithsonian's National Museum of American History.

University of Alabama associate professor Michael J. Altman, one of the project's directors, says Jan. 6 was more than just a secular political gathering. For many, it was also spiritual in nature.

"This event was very much religious. Religion was everywhere," he said Wednesday.

On the day of the insurrection, many in the crowd proclaimed dual loyalties.

"Jesus Is My Savior. Trump Is My President," was a message on display Jan. 6 and in the months leading up to it, not only in Washington but also in Arkansas.

Some of the people swarming the Capitol took their Bibles with them. A few offered prayers after invading the Senate chambers.

Throughout the day, hymns were sung and hands were lifted heavenward. "Jesus Saves" signs were for sale. One poster featured Christ, crowned with a red Make America Great Again cap.

In an essay written with his fellow project director, Jerome Copulsky, Altman describes Jan. 6 as "a religious, yet religiously incoherent event."

At least some participants appeared to identify as Catholics, Mormons, Jews, New Age, neo-pagan or followers of QAnon, the authors note.

"It wasn't just conservative Christianity that was there. There was all sorts of stuff there," Altman said Wednesday. "The event was as plural[istic] as religion is in the United States."

While eager to study the topic, Altman is steering clear of value judgments.

"To try to drop this into a good religion/bad religion narrative or trope, I think, totally misses the point," he said.

"It's not like religion is either good or bad," he said. "Religion is a tool, a set of images, symbols, texts, songs, rituals that people can draw on to do all sorts of things."

"What's interesting to see is how various people deployed religion, used religion, spoke through religion [on Jan. 6] ... to express their outrage, their fear. Whatever it was," he said.

Peter Manseau, Lilly Endowment Curator of American Religious History at the Smithsonian Institution's National Museum of American History, says the partnership between Smithsonian and the University of Alabama is "a great opportunity" to both foster research and reach a wider audience.

Using the hashtag #CapitolSiegeReligion, Manseau was one of the first people to emphasize the spiritual element of the Jan. 6 protests.

In an interview Wednesday, he described the camp-meeting-type atmosphere that pervaded the rally.

As protesters marched from the White House to the Capitol, they heard prayers being broadcast over speakers, hymns being sung and other "religious rhetoric," Manseau said.

"For many people there, it had the feeling of a revival. They thought they were taking part in a religious event," he said.

In the Pentecostal and charismatic movements, some self-proclaimed prophets had foretold, falsely, that Trump would serve a second consecutive term.

Others had spoken in near-apocalyptic terms about the stakes, portraying a Trump victory as divinely ordained.

During a post-election interview with Trump on the Eric Metaxas Radio Show, its Christian conservative host had promised to stick with Trump no matter what, telling the president in late November: "We are going to win. Jesus is with us in this fight for liberty. ... I'd be happy to die in this fight. This is a fight for everything. God is with us."

Even after the ballots had been counted, the results certified, the court challenges exhausted and the electoral votes submitted, some Trump supporters viewed victory as inevitable.

"There were certainly a fair number of people who were there with the understanding that God had chosen Donald Trump to be president," Manseau said. "They thought they were setting the world right, according to their understanding of Divine Will."

"This will be, I think forever, understood as one of the darkest days in American democracy," he said.

"Even 100 years from now, we will be looking back at this event as a real low mark," he said. "Keeping the documentary evidence in front of us is hugely important, not only for the moment we're in ... but for future generations."