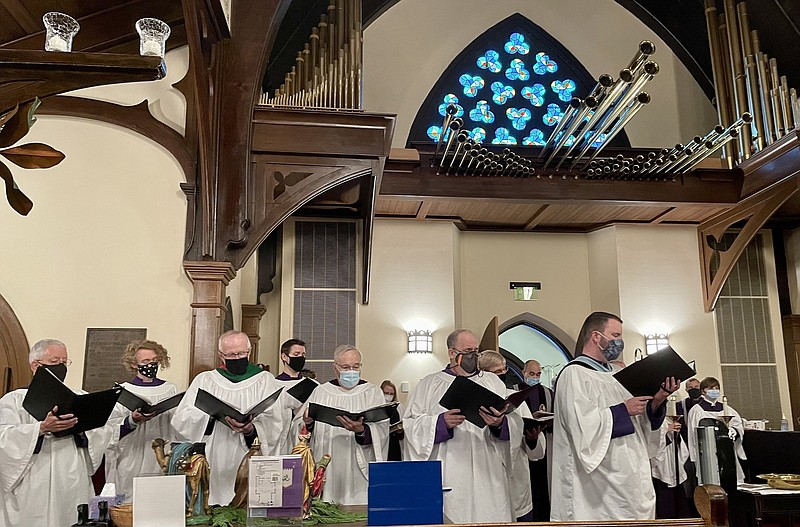 The choir at Trinity Episcopal Cathedral in Little Rock sings during a Christmas Lessons and Carols service on Dec. 19, 2021.

After Christmas, some Arkansans quickly box up the ornaments, take down the tree and happily put the holidays behind them.

Others prefer to savor the season, even with December in the rear-view mirror.

Fortunately for them, things remain merry and bright at Little Rock's Trinity Episcopal Cathedral. It's Twelfth Night Lessons and Carols service at 4 p.m. Sunday will provide an Epiphany encore -- one final dose of pipe organ-infused comfort and joy.

Like its Christmas counterpart, it will be a sermon-free time of singing and Scripture reading.

Episcopalians, like many other Christians, formally marked Thursday as the Feast of the Epiphany; the 12th and final day of Christmas was Wednesday.

"Epiphany is the celebration of when the wise men appeared at the manger," said Amy Dafler Meaux, the Cathedral's dean and rector. On occasion, a church also will hold a "Burning of the Greens." The charred remains can be used to mark Ash Wednesday foreheads.

Typically, Lessons and Carols services are held to celebrate Advent and the Nativity; the Christmas Eve service from King's College Chapel in Cambridge, England, is broadcast each year on the BBC.

"For Trinity, this is actually a first occurrence," said Colin MacKnight, the congregation's director of music since July.

"Epiphany is one of the best days for hymnody of the church year," he noted.

But when the day falls midweek, it's easy to simply skip over the music associated with the occasion.

"The idea of not getting to do 'We Three Kings' and 'Brightest and Best' is disappointing, so we created this service, in part, to give us the opportunity to sing some of the great Epiphany hymns," MacKnight said.

At Long Island's Cathedral of the Incarnation, where MacKnight previously served as associate organist, the annual Twelfth Night celebration "was a really popular service and a really big deal," he said.

After earning his Doctorate of Musical Arts from the Juilliard School in New York in June, MacKnight headed to Arkansas' capital city and brought the Twelfth Night vision with him.

At Trinity, parishioners quickly warmed to the idea of an Epiphany-themed lessons and carols service.

It will be a festive occasion, with MacKnight pulling out all the stops.

"I think he's one of the finest organists I've ever listened to. He is just incredible at the organ," Meaux said.

The service will include eight relevant Scripture passages, sandwiched between hymns and anthems.

"[W]hile Advent and Christmas Eve are the most traditional times to schedule a Service of Lessons and Carols, it makes perfect sense to retell the story of the birth of Christ in its completeness during Epiphany, the time when the Magi visited the Christ child and then the Holy Family made the flight to Egypt, and the slaughter of the innocents," Hawn said in an email. "From a biblical perspective, this completes the nativity story in its fullness. Furthermore, the liturgical cycle is Advent-Christmas-Epiphany. Often we truncate the narrative to only include Advent-Christmas."

The lessons of the Epiphany are ancient but also relevant, he suggested.

"The flight to Egypt and the slaughter of the innocents by Herod, for example, are very important parts of the narrative in countries where people must migrate to survive, oppressive political regimes persecute parts of their populations, and famine and natural disasters cause the death of children," he said.

Much of the traditional Christmas story is drawn from the gospel of Luke, which tells of the manger, the "sore afraid" shepherds and the heavenly host proclaiming Christ's birth.

The wise men and the slaughter of the innocents, on the other hand, are described in Matthew's gospel.

"It's not as attractive as the Luke narrative, but is a part of the story that we often overlook," Hawn said. "I don't know what the Cathedral is going focus on, but I like the idea and would be interested to see how they tell the fuller story."