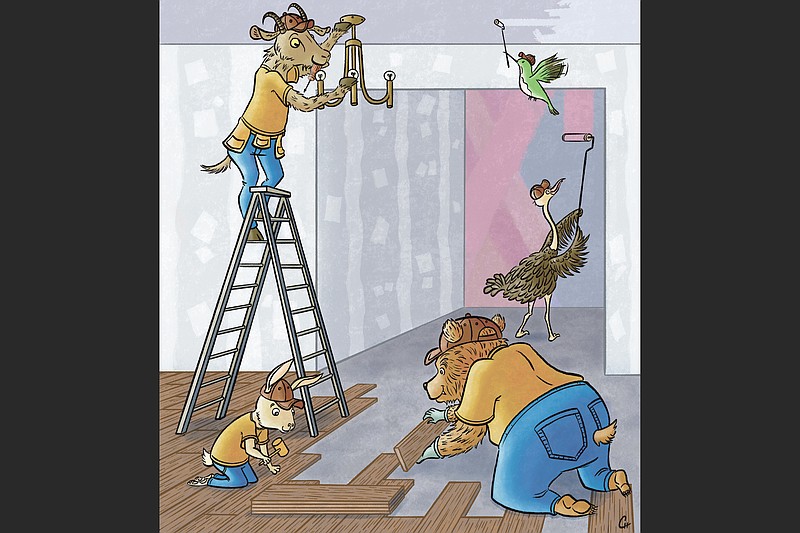 With travel plans largely in limbo over the past many months and many Americans still unsure of the safety of venturing out, some have turned their attention instead to improving the homes where they're increasingly spending their time. Renovating your house can not only make it more enjoyable to stay indoors, it can boost the house's value and become a profitable investment in the long term.

But it's a decision-heavy process. There's the matter of deciding on the renovation project itself, followed by deciding how much to pay and, if needed, how to pay for it.

Prices for a well-done project can be steep. However, a renovation can be within reach with several financing options, including savings, a home equity line of credit (HELOC), a construction loan and credit cards.

"The sweet spot for kitchen [renovations] tends to be around 10% of the sticker price of the home, and for bathrooms it's about half that," said Mischa Fisher, chief economist at Angi, a home services platform. "For the average home in the U.S. valued at around $350,000, a kitchen upgrade costing around $35,000 and a bathroom upgrade costing around $17,000 will give you the best return on investment."

Unless you have significant savings built up, five-figure renovations will mean taking out a loan of some sort. Luckily, there is no shortage of options for borrowing money to make that dream project a reality. From construction loans to personal loans, cash-out refinancing, a HELOC, 401(k) loans and even credit cards, there's almost certainly a way out there for a motivated homeowner to get financing for their project.

Whether that renovation makes financial sense, and what borrowing option is best, will depend on a wide range of factors, including the cost of the house, the cost of the project, the owner's credit score, familiarity with construction, risk tolerance and confidence in the market.

Rising house prices mean most homeowners have a good bit of equity right now. The drawback is that selling to move into a larger or better-located property can still be out of reach, since those properties have gone up in price as well, which makes renovating the place you already live potentially more enticing.

"Consumers feel backed into a corner," said Patrick Walsh, senior vice president at Tandem Bank in Atlanta. "The market is so competitive for new product as well as resale right now, I'm sure a lot of consumers feel that a renovation is their only option. The downside to that is the high price of lumber and other issues that make the projects less feasible than they otherwise would be."

Still, a tastefully done renovation can bring a nice return on investment. Besides the ever-popular kitchens and bathrooms, improving the view always helps.

"The best payoffs tend to be large visual changes for a modest price tag, things like exterior projects with curb appeal," Fisher said. "If your siding is in bad shape, consider repairing or replacing it. It could cost you upwards of $10,000 upfront but is likely to recoup 80% or more of that cost — not to mention, it's a great first impression for potential buyers."

No matter the project, Fisher advises interviewing multiple contractors and getting at least three estimates before moving forward.

Perhaps the simplest method of financing a renovation is to pay with savings if that is an option. There is no interest to pay back and no paperwork to fill out. Even so, homeowners should be mindful to select a project that gets the best return on investment and may want to think twice about tapping savings for home renovations.

With interest rates at or below 3% in many cases, it might make better financial sense to take out a loan and look at investing that savings elsewhere. The Federal Reserve has said it intends to raise interest rates soon, which would mean that the historically low mortgage rates would increase as well.

"If you've got somebody who's confident they can get a better return than 3.5% by investing their savings, I'd encourage them to at least discuss the opportunity cost of using that cash," Walsh said. "If you're paying down debt at 3.5% when you could get a return of 6%, you may be better off using some of that cash for something else."

Products like a Federal Housing Administration 203(k) or Fannie Mae HomeStyle Renovation loan can be made based on the presumed higher future value of a home after renovation. However, they are not simple to use and usually involve tricky terms.

"FHA 203(k) and Fannie Mae type construction loans are expensive," said Erika Safran, principal of Safran Wealth Advisors in Manhattan. "They are highly regulated and funds are released to your contractor based on stages of construction."

Safran adds that construction loans can also include private mortgage insurance and that there are ongoing evaluations and appraisal costs during the project. For those who do use a construction loan, she advises refinancing to a conventional mortgage once the renovation project is finished.

For homeowners looking to borrow a relatively small amount, a personal loan could make sense because there is less up-front cost and it's paid back more quickly than a full refinance.

Personal loans are usually paid back within six or seven years and, while rates are higher than for a HELOC or mortgage, they are usually lower than a credit card.

Mortgage refinancing has been a popular option for homeowners for a long time regardless of whether they're renovating. The reason? Interest rates have been falling for decades.

"I've been saying for 20 years that we're at the lowest point with interest rates that we've ever been," said Jennifer Adams, vice president of mortgages at GuardHill Financial Corp. in New York. "We've been in a constant state of refinance boom."

A cash-out refinance means replacing the existing mortgage with an entirely new one. If the cash-out loan is used to pay for renovations, it will be for a larger amount than the initial loan. With interest rates so low at the moment, the homeowner could still wind up with a lower overall payment afterward, though for a longer loan term.

Cash-out refinancing also means the money goes to the homeowner rather than to contractors, making it more flexible than a construction loan.

A HELOC is a good option for those with enough equity, which is a lot of homeowners these days thanks to recent appreciation.

While the closing costs are low and so are the payments, those initial payments are interest-only. Homeowners can also take out a tax deduction for the interest paid. Safran said it's important for people to fully understand the terms of a HELOC before they sign.

"Consumers may mistakenly opt for a HELOC because of a low payment without realizing the minimum payment covers only interest," she said. "In order to fully pay off the loan within the five-year time frame, homeowners should pay both principal and interest."

Borrowing against the equity in your home can also be risky should prices fall again, as they did during the Great Recession. Walsh said Tandem Bank will allow homeowners to borrow up to 80% of the value of their home using a HELOC, but some lenders go all the way up to 95%.

Borrowing against your retirement savings can be a quick way to get cash, and you'd pay interest to yourself rather than an outside lender. Borrowers can usually take out up to $50,000 or 50% of the balance.

But as with using personal savings, Walsh cautions consumers about taking money out of their 401(k), which is invested in stocks and bonds, and using it to invest in a renovation.

"If you're using it just as a gap to get the house finished and then once it's done you put permanent debt on it, that could be a viable option," he said. "But long term, what is the opportunity cost of having that money out of the [stock] market? I don't think [in the long run] you'd get the same return in real estate that you'd get on the 401(k)."

Most financial advisers don't encourage using a 401(k) loan unless no other financing is available.

Another option that's sometimes discouraged by financial advisers is using a credit card. A disciplined borrower can open a new card and take advantage of six- or 12-month no-interest periods to borrow money for free. But if this plan doesn't work out, the borrower will be hit with interest rates ranging up to 20% or higher.

"That's a really expensive way to do a renovation," Adams said about using credit cards for renovation work.

While credit cards have the highest rates, there are no additional up-front or closing costs, and if debt is paid off in one or two years you can complete the project without adding on long-term debt.

For these reasons, Safran does endorse using credit cards in some circumstances.

"If it's a small enough project to pay off with a card within a year, pay it off," she said. "Done and done."