JPs vote to look at issue of noise 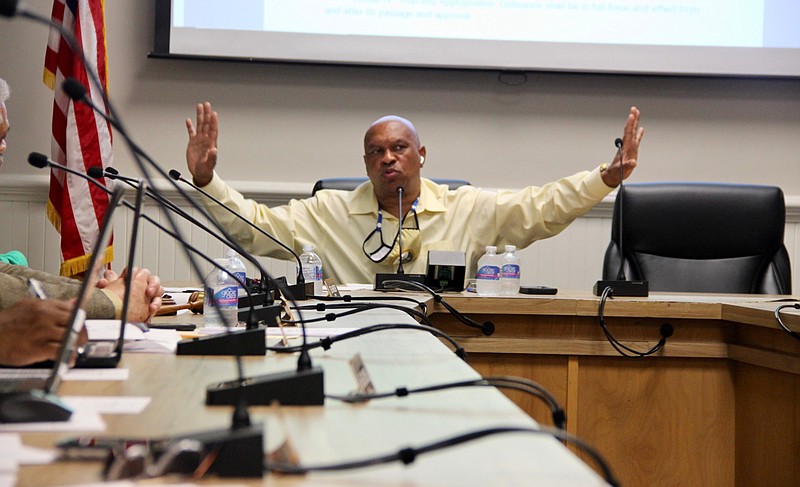 Gerald Robinson, county judge of Jefferson County, gestures during a meeting of the Jefferson County Quorum Court in this May 2021 file photo. (Pine Bluff Commercial/Eplunus Colvin)

The first Quorum Court Committee meeting of the year was short and safely conducted virtually through Zoom because of the heightened number of confirmed covid-19 cases.

With a total of 959 active covid-19 cases in Jefferson County as of Thursday, according to the Arkansas Department of Health, Jefferson County's County Judge Gerald Robinson said the Quorum Court would continue to meet virtually until the numbers decline significantly and more people are vaccinated.

"The highest number of cases are being reported in the state of Arkansas," said Robinson. "Covid is still running rampant and is very dangerous. We've had more deaths and will continue doing Zoom until further notice."

During the brief meeting, the Quorum Court Committee voted to send a proposed noise violation ordinance to full Quorum Court.

The proposed ordinance, which would prohibit unreasonably loud noises and disturbance of the peace in Jefferson County, will be presented by the Public Safety Committee. Sponsored by committee chairman Dr. Conley Byrd, the proposed ordinance calls for a fine for violating the ordinance.

According to the proposed ordinance, disturbing noises of such volume and duration as to be detrimental to the life or health of any individual or to disturb the public peace and welfare would be prohibited in Jefferson County

The following would be prohibited: the playing of any radio, stereo, music reproduction system or musical instruments of such volume particularly between the hours of 10 p.m. and 6 a.m.

Any violation of the ordinance will result in a fine of up to $500 and double for each repeated violation.

Justice of the Peace Danny Holcomb asked how that would fit in with the Fourth of July or New Year's Eve when people shoot off fireworks between those hours that the noise ordinance would prohibit.

Byrd said it would be at the police officer's discretion.

The first one would authorize Robinson to appropriate $673,906 from the American Rescue Plan for the 2022 budget year.

The next one would authorize Robinson to appropriate a total of about $2.2 million in various grants that weren't spent last year and carry over into this year.

In a special announcement, Robinson said Jefferson County received a $400,000 grant Wednesday from the state to put toward construction of the new county health unit.

"This is in addition to the previous grant that I applied for in the amount of $300,000. The total now stands at $700,000 in awarded funding from the state for the construction of our new county health department," said Robinson. "I'm very grateful for the state's partnership on this project and excited about the work that we are doing together as One Jefferson County."

Print Headline: JPs vote to look at issue of noise