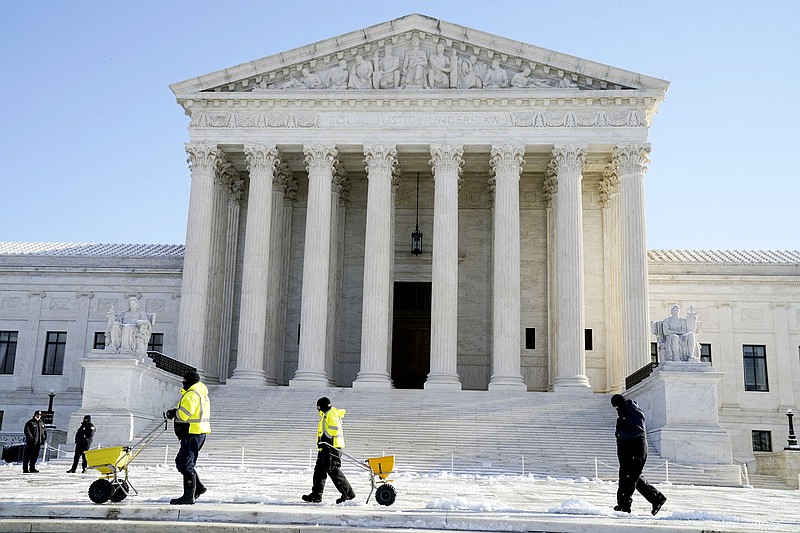 The Supreme Court shown Friday, Jan. 7, 2022, in Washington. The Supreme Court is taking up two major Biden administration efforts to bump up the nation's vaccination rate against COVID-19 at a time of spiking coronavirus cases because of the omicron variant. (AP Photo/Evan Vucci)

WASHINGTON -- Members of the U.S. Supreme Court's conservative majority expressed skepticism Friday that the Biden administration has the legal power to mandate that the nation's large employers require workers to be vaccinated against the coronavirus or undergo frequent testing.

A federal workplace safety law, they indicated, did not provide legal authority for the broader emergency measure.

[Video not showing up above? Click here to watch » arkansasonline.com/18dchearing/]

The court was less skeptical about a separate requirement that health care workers at facilities that receive federal money be vaccinated. That regulation, the subject of a second argument, was in keeping with other kinds of federal oversight and was supported by virtually all of the medical establishment, some justices noted.

Chief Justice John Roberts and Justice Neil Gorsuch -- the only justice to remain unmasked throughout the arguments, which lasted more than 3½ hours -- said the states and Congress, rather than a federal agency, were best situated to address the pandemic in the nation's workplaces. Justice Amy Coney Barrett said the regulation appeared to reach too broadly in covering all large employers.

"This is something the federal government has never done before," Roberts said, casting doubt on the administration's argument that a half-century established law, the Occupational Safety and Health Act, confers such broad authority.

Roberts and Barrett asked whether OSHA could have imposed a more targeted policy based on specific workplaces that put employees in close contact, such as a factory assembly line or a poorly ventilated setting. The emergency rules would cover about two-thirds of the nation's workplaces.

Ohio Solicitor General Benjamin Flowers agreed that the policy was too broad and "not truly intended to regulate a workplace danger. It's a danger that we all face simply as a matter of waking up in the morning."

Justices Gorsuch and Brett Kavanaugh suggested that the governing statute had not authorized the agency to impose the mandate clearly enough, given the political and economic stakes.

The court's three more liberal justices said the mandate was a needed response to the public health crisis.

Justice Stephen Breyer said he would find it "unbelievable that it would be in the public interest to stop these vaccinations." He noted that on Thursday there were some 750,000 new cases in the country and that hospitals are full.

Some of the participants in the arguments were missing from the courtroom. Justice Sonia Sotomayor, who has diabetes and has worn a mask since the justices returned to the courtroom in October, participated remotely from her chambers.

Sotomayor pointed out that "catching covid keeps people out of the workplace for extraordinary periods of time."

Two of the lawyers -- Flowers and Elizabeth Murrill, solicitor general of Louisiana -- argued via phone. The court's covid protocols require lawyers to be tested for the virus.

All of the justices are fully vaccinated and have received booster shots, a court spokeswoman said. It is unclear when the court will rule.

The Supreme Court has repeatedly upheld state vaccination mandates in a variety of settings against constitutional challenges. The cases before the court now are different, as they primarily present the question of whether Congress has authorized the executive branch to institute the requirements.

The answer will turn mostly on the language of the relevant statutes and on whether the administration followed proper procedures in issuing the requirements.

The first argument addressed a measure directed at businesses with 100 or more employees that would impose a vaccine-or-testing mandate on more than 84 million workers. The administration estimated that the rule would cause 22 million people to get vaccinated and prevent 250,000 hospitalizations.

It was issued in November by the Labor Department's OSHA.

Employers are allowed to give their workers the option to be tested weekly instead of getting the vaccine, although they are not required to pay for the testing. The rule makes exceptions for employees with religious objections and those who do not come into close contact with other people at their jobs, like those who work at home or exclusively outdoors.

Under the 1970 law, OSHA has the authority to issue emergency rules for workplace safety, provided it can show that workers are exposed to a grave danger and that the rule is necessary.

States, businesses and others challenged the measure in appeals courts around the nation, and a unanimous three-judge panel of the 5th U.S. Circuit Court of Appeals in New Orleans ruled in favor of some of the challengers, blocking the measure.

After the challenges were consolidated before the 6th U.S. Circuit Court of Appeals in Cincinnati, a divided three-judge panel reinstated the measure.

"The record establishes that COVID-19 has continued to spread, mutate, kill and block the safe return of American workers to their jobs," Judge Jane Stranch wrote for the majority. "To protect workers, OSHA can and must be able to respond to dangers as they evolve."

"The mandate is aimed directly at protecting the unvaccinated from their own choices," she wrote. "Vaccines are freely available, and unvaccinated people may choose to protect themselves at any time."

In the Supreme Court case, National Federation of Independent Business v. Department of Labor, No. 21A244, the challengers argued that the regulation did not address a workplace issue and so exceeded the agency's lawful authority.

"COVID-19 is not an occupational danger that OSHA may regulate," lawyers for Ohio and 26 other Republican-led states told the justices in a brief.

They added that agencies seeking to issue regulations on "major questions" with broad economic or political implications must have clear congressional authorization.

The states told the Supreme Court that they share the administration's "strong interest in combating the spread of a virus" that has killed more than 836,000 Americans. "But federal agencies cannot bend the law to pursue whatever means they think will most effectively bring about a worthy end," the brief argues.

The second argument concerned a measure requiring workers at hospitals and other health care facilities that participate in the Medicare and Medicaid programs to be vaccinated. The requirement at issue in the case, Biden v. Missouri, No. 21A240, would affect more than 17 million workers, the administration said, and would "save hundreds or even thousands of lives each month."

The case concerns a regulation issued in November requiring health care workers at facilities that receive federal money under the Medicare and Medicaid programs to be vaccinated unless they qualify for medical or religious exemptions.

States led by Republican officials challenged the regulation, obtaining injunctions against it covering about half of the nation. Two federal appeals courts, in New Orleans and St. Louis, refused to stay those injunctions while appeals moved forward.

A third federal appeals court, in Atlanta, sided with the Biden administration.

"Health care workers have long been required to obtain inoculations for infectious diseases, such as measles, rubella, mumps and others," Judges Robin Rosenbaum and Jill Pryor wrote for a divided three-judge panel, "because required vaccination is a common-sense measure designed to prevent health care workers, whose job it is to improve patients' health, from making them sicker."

The administration argued that a federal statute gave it broad authority to impose regulations concerning the health and safety of patients at facilities that receive federal money. The statute gives the secretary of the Department of Health and Human Services the general power to issue regulations to ensure the "efficient administration" of the Medicare and Medicaid programs, and parts of the statute concerning various kinds of facilities generally also authorize the secretary to impose requirements to protect the health and safety of patients.

"It is difficult to imagine a more paradigmatic health and safety condition than a requirement that workers at hospitals, nursing homes and other medical facilities take the step that most effectively prevents transmission of a deadly virus to vulnerable patients," Solicitor General Elizabeth Prelogar wrote in a Supreme Court brief.

She told the justices that covid-19 "is the deadliest pandemic in American history and it poses a unique workplace danger."

In response, lawyers for Missouri and other states wrote that the "sweeping and unprecedented vaccine mandate for health care workers threatens to create a crisis in health care facilities in rural America."

"The mandate would force millions of workers to choose between losing their jobs or complying with an unlawful federal mandate," they wrote. Had a judge not issued an injunction, they added, "last year's health care heroes would have become this year's unemployed."

Both vaccination rules would exacerbate labor shortages and be costly to businesses, lawyer Scott Keller argued on behalf of more than two dozen business groups. Without an immediate order from the court, "workers will quit right away," he said, with the government's policy imposing new costs and causing a "massive economic shift."

"Our nation's businesses have distributed and administered hundreds of millions of covid vaccines to Americans. Businesses have encouraged and incentivized their employees to get vaccines," Keller told the court. "But a single federal agency tasked with occupational standards cannot commandeer businesses economy-wide into becoming de facto public health agencies."

But Kavanaugh said it was a "very unusual situation" that hospitals and health care organizations affected by one of the regulations were "not here complaining" but instead support it. "What are we to make of that?" he asked.

"Unvaccinated Americans continue to face a real threat of severe illness and death -- including from omicron," Psaki said in a statement. "The need and the urgency for these policies is greater than ever, and we are confident in the legal authority for both policies."

Information for this article was contributed by Adam Liptak of The New York Times; by Mark Sherman and Jessica Gresko of The Associated Press; and by Robert Barnes and Ann E. Marimow of The Washington Post.