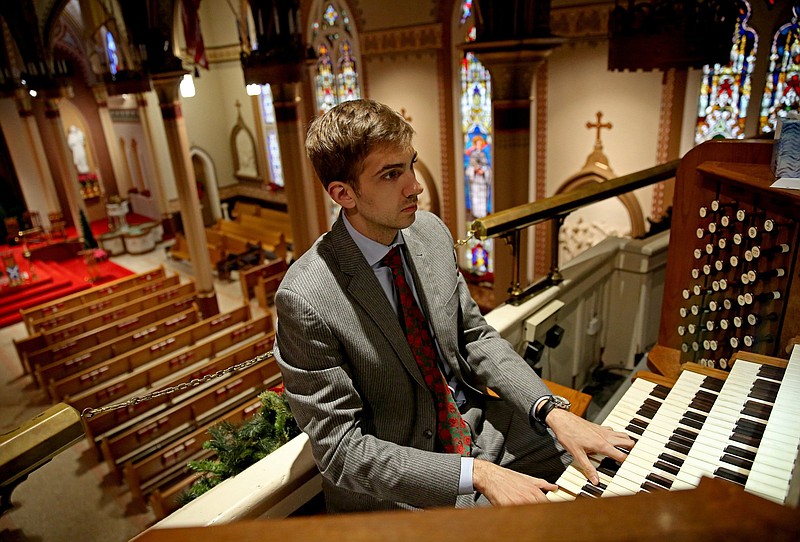 Colin MacKnight, director of music at Trinity Episcopal Cathedral in Little Rock, is a relative newcomer to the pipe organ.

He didn't begin playing the instrument until he was 16 years old.

"I sort of came to the organ because I loved its repertoire," MacKnight, 28, said earlier this week.

Growing up in Maryland, "I played a bunch of other instruments and developed a love -- or really an obsession -- for Bach. I don't think you can have a thorough understanding of Bach without diving into his organ music, so I started trying to play, even though I had no business doing so," he said.

Johann Sebastian Bach, the 18th-century German composer and church organist, "dominates the organ repertoire to a degree that no other composer dominates any other repertoire," he said.

For his senior year in high school, he studied at Walnut Hill School for the Arts in Natick, Mass.

"I was a double bass major there, but I also found a great organ teacher there, and that was just completely fortuitous," he said.

"I was mainly applying as a double bassist, because that was my primary instrument. But I actually prefer the organ so I tried that as well," he said.

"When I got into Juilliard for organ, it was a pretty easy decision," he said.

"I'm quite certain I wouldn't have ended up at Juilliard if I hadn't had that year at Walnut Hill," he said.

A decade after enrolling, MacKnight departed with three degrees -- a bachelor's, a master's and a doctorate.

After a successful Zoom interview, Trinity Episcopal Cathedral officials invited him to Little Rock for an in-person interview.

In July, shortly after graduation, he moved to Arkansas' capital city.

On Tuesday, he played a recital at the Cathedral of St. Andrew, in conjunction with the Conference of Roman Catholic Musicians.