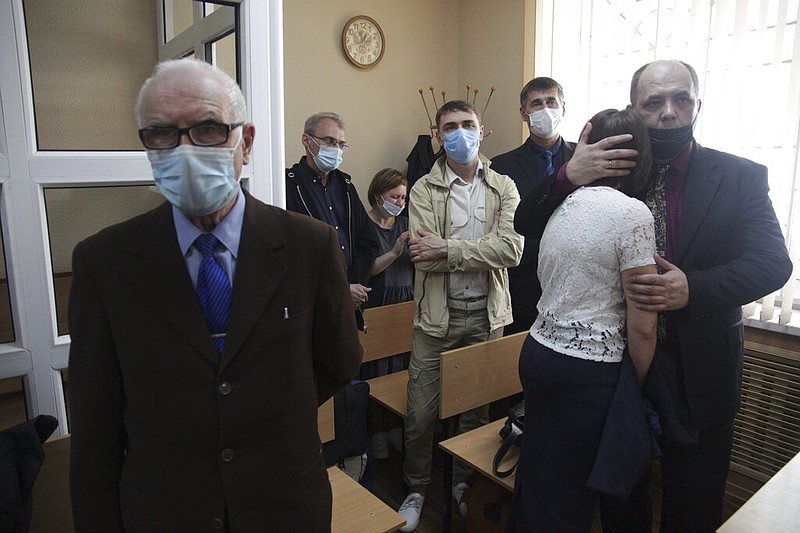 After a period of freedom following the collapse of the Soviet Union, Jehovah's Witnesses are again facing intense, government-sponsored persecution in Russia.

Since a 2017 Supreme Court classifying the Jehovah's Witnesses Administrative Center as an extremist organization, the group has been stripped of its legal status. Many of its places of worship, known as Kingdom Halls, have been confiscated.

Individual Witnesses are being treated as enemies of the state.

At year's end, 77 Jehovah's Witnesses were in Russian prisons for practicing their faith and another 31 were under house arrest, according to Jarrod Lopes, a New York-based spokesman for the worldwide organization.

Many others have been targeted. Over the past five years, a total of 1,660 homes have been raided, Lopes said.

A Russian Supreme Court ruling indicated that individual or collective worship by Jehovah's Witnesses is not, in itself, a crime.

It's unclear how that ruling will affect those currently awaiting trial, Lopes said.

In November, a court in Vladivostok -- roughly 5,500 miles east of Moscow -- acquitted Dmitry Barmakin of organizing extremist group activities, saying the Jehovah's Witness had simply "exercised the right to freedom of religion enshrined in the Constitution of Russia."

Other defendants have been less successful, Lopes said.

"Jehovah's Witnesses continue to get convicted, and they're convicted as extremists, which puts them on the same level as terrorists like al Qaeda," he said.

The persecution, Lopes said, is unwarranted.

There is nothing criminal, Lopes argues, about reading the Bible, singing songs and offering prayers.

"A lot of times in a criminal case, you're trying to examine who was hurt by this [defendant]," he said. "In this case, they have no victims because no one is hurt by these people."

As of 2016, there were roughly 171,000 Jehovah's Witness "publishers" in Russia, individuals in good standing who are actively sharing their faith.

A total of 321 church-related properties, valued at $53 million, have been seized, church officials say.

In April, the U.S. Commission on International Religious Freedom called on the U.S. State Department to designate Russia as a Country of Particular Concern, arguing that it engages in or tolerates "particularly severe violations of religious freedom."

Under the International Religious Freedom Act, countries qualify for the list if they have "systematic, ongoing, [and] egregious violations ... including violations such as -- (A) torture or cruel, inhuman, or degrading treatment or punishment; (B) prolonged detention without charges; (C) causing the disappearance of persons by the abduction or clandestine detention of those persons; or (D) other flagrant denial of the right to life, liberty, or the security of persons."

James Carr, a Searcy man who serves on the commission, expressed bafflement at Moscow's treatment of Jehovah's Witnesses, noting they make up a fraction of 1% of the country's residents.

The onetime superpower now has a population estimated at 146 million.

"Here's a mighty power: Russia. ... And for some reason, they're afraid of these people," Carr said.

"I don't know a lot of members of the Jehovah's Witness faith, but I know enough to know they're pretty peaceable people. And they're being put in prison just for practicing their faith," he said.

Those convicted could be locked away "not for six months but for many, many years, in some cases," he added.

With 8.6 million Jehovah's Witnesses around the world, they are a global force. While referring to Jesus as the founder of their organization, they say the modern-day movement arose from a small group, who referred to themselves as Bible Students living near Pittsburgh toward the end of the 19th century.

Since 1931, they have referred to themselves as Jehovah's Witnesses.

They are taught to treat political authorities respectfully.

In the New World Translation of the Bible, which Witnesses use and distribute, they are instructed to "be obedient to governments and authorities, to be ready for every good work, ... to be reasonable." (Titus 3:1-2.)

They are also urged to pray "concerning kings and all those who are in high positions" so that they "may go on leading a calm and quiet life with complete godly devotion and seriousness." (1 Timothy 2:1-2.)

Nonetheless, they will refuse to comply with a law if they believe it defies Jehovah's dictates as outlined in the Bible.

Politically neutral, they also decline to participate in many civic activities.

Witnesses do not vote or run for office, they do not recite the pledge of allegiance or sing patriotic anthems. Nor will they serve in the military, although they have the option of performing civilian service, if their conscience allows it.

For the Witnesses, persecution is hardly a new phenomenon. The Soviets banished many of them to Siberia. The Nazis placed others in concentration camps.

In the United States, the Witnesses encountered hostility, particularly when they refused to salute the flag or to serve in the armed forces.

The Witnesses have had an outsized influence on U.S. constitutional law, according to Jane G. Rainey, a professor emeritus of political science at Eastern Kentucky University.