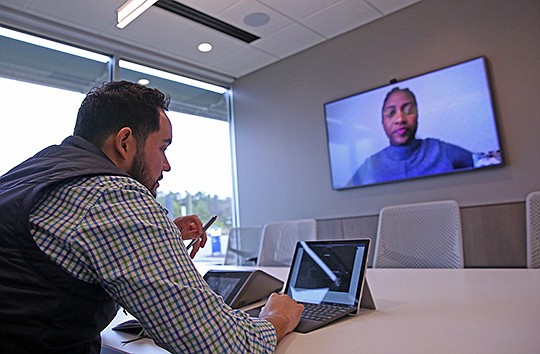 Miguel Lopez knew few other Hispanic students in school as a child in Central Arkansas.

Hispanic Arkansans were "few and far between" back then, the 30-year-old Little Rock banker said, with the U.S. Census Bureau reporting 8,816 in Pulaski County in 2000, but it has since been "amazing to see the boom in population" in the past two decades.

Now, 33,513 people in Pulaski County are Hispanic, according to the 2020 census, comprising 8.3% of the county's population.

Born in Mexico, Lopez has lived in Arkansas since he was 5, and he calls the state "the best place in America to fulfill the American dream."

The Hispanic population of Arkansas has grown consistently over the past two decades, census data show. A variety of jobs and a relatively low cost of living have made Arkansas an attractive destination for immigrants, and their children have chosen to remain in the state, according to Hispanic community leaders.

Local and statewide businesses and advocacy organizations have sought to build relationships with Hispanic Arkansans in multiple sectors, from business and finance to higher education and civic engagement.

Census data recorded 256,847 Arkansans identifying as Hispanic in 2020. Many are of Mexican descent, but some have roots in other Latin American countries, such as El Salvador, said Greg Fess, president and CEO of Univision Arkansas.

Sevier County in Southwest Arkansas has the state's highest proportion of Hispanic Americans, with 5,508 people comprising 34.8% of the county's population.

Benton County in Northwest Arkansas has the most Hispanic residents, with 50,540, or 17.8% of the county's population.

Northwest Arkansas, which has seen the state's largest increases in population totals and density, is home to many second-generation Hispanics whose parents immigrated in the 1990s and worked in poultry plants, Fess said. Many of these immigrants' children chose to remain in the region and start families, he said.

[HISPANIC POPULATION: Map of Arkansas not showing up above? Click here to see it » arkansasonline.com/19arkcounty]

"They're leading the way, buying homes, starting new businesses, going to college, opening bank accounts -- all the things you would think of" in terms of settling into the area, Fess said.

"I would say a lot of that is on the backs of the Hispanic and Latino populations who are moving to those communities and not just filling jobs, but also creating more with their entrepreneurial spirit," Lopez said.

[ETHNIC IDENTITY: Bar chart not showing up above? Click here to see it » arkansasonline.com/19arkcensus]

Lopez said the costs of living and homebuying throughout the state have increased at slower rates than in other states, like Texas, enticing immigrants to not only come to Arkansas but to stay.

At Encore Bank, Lopez helps Hispanic immigrants set up bank accounts and adjust financial decisions to their new country. He previously worked for the Little Rock Regional Chamber of Commerce and said the business community throughout Arkansas has worked to draw Hispanic immigrants and give them stable jobs.

"They've seen how important immigrant labor is, not only in the farms but also in construction and trucking," Lopez said. "As a banker, that's one of the things I'm most proud and passionate about."

His parents first tried to settle their family in California after immigrating from Mexico, but it "didn't quite fit what we wanted and needed," he said.

"We had an aunt who lived in North Little Rock, and she said we should check it out, and it was the biggest break in our lives," Lopez said.

'A LIFE OF DIGNITY'

"It's exciting to see, in very rural locations in Arkansas, an appreciation for and demand for authentic Mexican food," Reith said.

Reith is a second-generation American born in Fayetteville to Mexican parents and said there is no part of Arkansas "that's not touched by the immigrant population."

Arkansas United began in 2010 when the U.S. Senate was debating the Development, Relief, and Education for Alien Minors (DREAM) Act, which would grant conditional residency to immigrants who came to the U.S. as minors and remained illegally.

The DREAM Act still has not passed in Congress, but Arkansas United has continued its mission to help Hispanic immigrants become U.S. citizens, register to vote and consider running for elected office, Reith said.

The nonprofit also closely follows the census to ensure that the Hispanic population is counted as accurately as possible, Reith said, since the census has historically undercounted this ethnic group, as well as other minority groups. Census data determines how the federal government distributes billions of dollars, so an inaccurate count can lead to insufficient resources for those communities.

Arkansas United worked to make sure the U.S. Census Bureau hired Hispanic staff members to reach out to members of their own communities while collecting data in 2020, Reith said, but she believes the population was still undercounted. The covid-19 pandemic was a barrier to in-person outreach, and former President Donald Trump said he wanted to add a citizenship question to the census form.

"The courts overturned it and the bureau wasn't going to do it, but once the news got out there, it was really hard for the community to feel confident and participate" in the census, Reith said.

She said she is proud of the work the Hispanic community throughout Arkansas did during the census collection process, but ensuring "our community has access to a life of dignity" is an ongoing effort.

In addition to distribution of resources, census data determine how legislative districts are redrawn every 10 years. Two-term state Rep. Megan Godfrey, D-Springdale, announced in November that she will not seek reelection this year because her redrawn district "no longer contains the Latino community that I've been so proud and thankful to represent," she said in an interview Saturday.

As a Spanish speaker and an English language learning co-director, Godfrey said she feels "intimately connected" to Springdale's Hispanic community. She sponsored a 2019 state law allowing immigrants covered by the federal Deferred Action for Childhood Arrivals (DACA) policy to become licensed as nurses.

DACA -- which is in legal limbo after a federal judge raised concerns about the policy's legality with an injunction last year -- provides employment eligibility and delays potential deportation of immigrants who came to the U.S. as minors and remained illegally.

The addition of DACA-eligible nurses to the workforce was especially valuable in 2020 because of the pandemic, Godfrey said.

She said she appreciates the "cultural and linguistic diversity" of the community she represents.

"My community in Springdale is better off because of the voices and stories of those who live there," Godfrey said. "I'm thankful we have the experiences of those who are new to the country, new to Arkansas and new to learning English."

Sevier County's local institution of higher education is Arkansas' only Hispanic-serving institution, meaning the student body is at least 25% Hispanic.

University of Arkansas-Cossatot Community College has made it a priority for its population to mirror the population of De Queen and Sevier County, said Chancellor Steve Cole and Erika Buenrrostro, the director of student success and enrichment.

"My number one goal was to do what I could to share some new ideas and bring some new initiatives to try to make everyone feel welcome," said Buenrrostro, who joined the UA-Cossatot administration in 2013. "It's one thing to say we want you here, but what are we actually doing to show that?"

Cole said actively recruiting Hispanic faculty and staff members is essential to the mission of recruiting students of the same background.

The college hosts multiple events each year to welcome and honor Hispanic students and seeks private funding for scholarships for them, Buenrrostro said.

Additionally, before the pandemic made travel inadvisable, UA-Cossatot called on Mexican consulate staffers from Little Rock to visit De Queen to help any local Mexican citizens obtain copies of documents needed to vote in Mexican elections. This helps people save money since they do not have to drive five hours round-trip to and from Little Rock, Buenrrostro said.

The college publicly honors its first-generation students of Hispanic descent, she said.

"We say we understand this is a big milestone, not just for you but for your parents," Buenrrostro said. "One of the reasons they came here is so their kids could have a better future, and it's happening."

Buenrrostro's parents immigrated from Mexico in 1989 to give their children more opportunities, she said.

"They wanted us to be bilingual, learn the [English] language and have a better opportunity of finishing school," she said. "It's possible to finish high school in Mexico, but it's more expensive, and there are more barriers to education as a whole. Getting a degree is on a whole other level."

She said she believes her work to make UA-Cossatot a welcoming place for her community has made her parents proud.

"[I'm] here for a reason, and if that's to sit at a table and explain this is how it is for the Latino community, I feel like it's contributing to the state," Buenrrostro said.