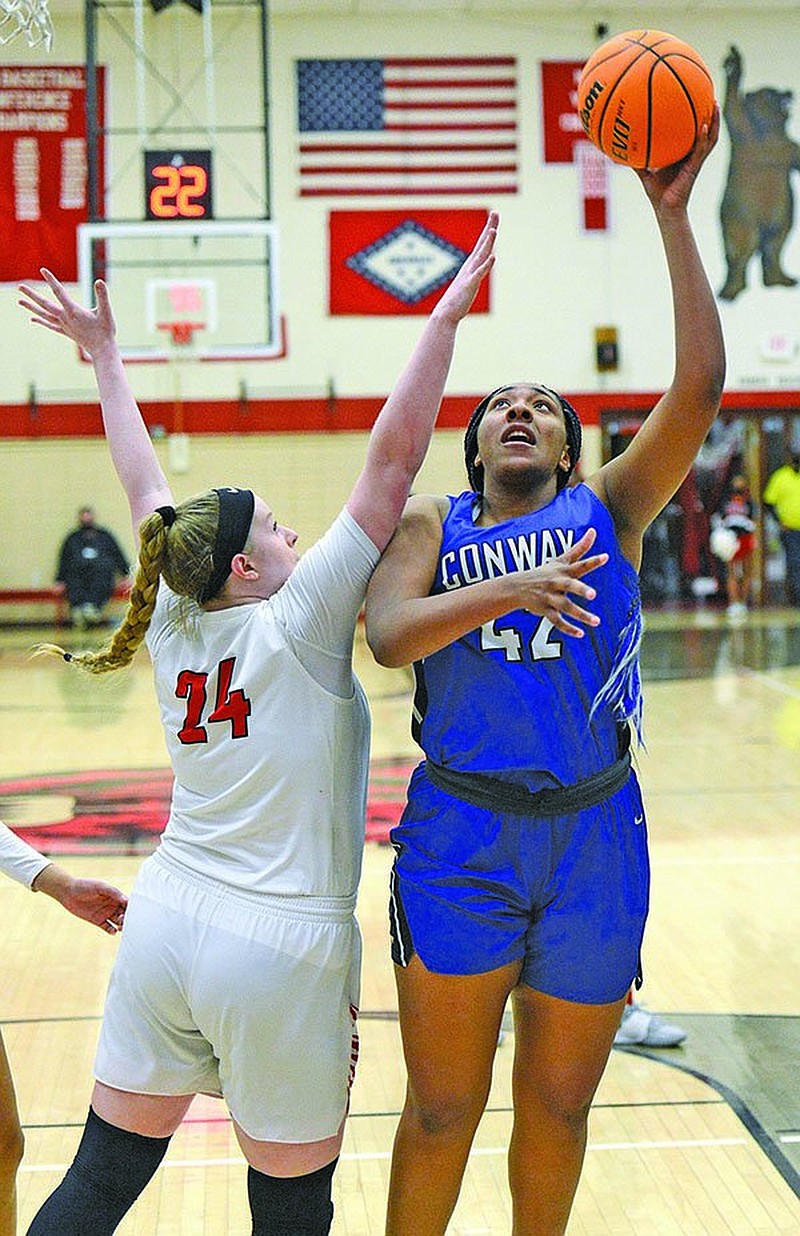 CONWAY -- It's amazing what one chance sit-down with a game-changing player can do for a team.

Just ask Conway Coach Ashley Hutchcraft, whose Lady Wampus Cats have been about as dominant as a group can be inside the state.

Conway is 14-1 -- winning all 14 games by at least 15 points -- and have been ranked No. 1 in the state and inside of the ESPN national top 20 rankings all season. The Lady Wampus Cats have beaten five of the top six teams in Class 5A by an average of 22.6 points, and they've taken out Springdale Har-Ber, which is ranked sixth overall, and Fayetteville by a combined 45 points. The other seven victories have come in blowouts over teams from Texas, California and Tennessee.

The only hiccup on Conway's otherwise eye-opening start was a 73-72 loss to a Duncanville, Texas, team that's ranked No. 12 in the country, one spot ahead of the Lady Wampus Cats. And Conway still nearly pulled off that win on the Lady Panthers' home floor.

But Hutchcraft, who was an All-Arkansas player and won three state titles at Guy-Perkins during her high school days, isn't at all interested in letting her team rest on their laurels. For her, complacency isn't an option, not in the least bit.

So she had no trouble pulling one of her standout players, Savannah Scott, to the side earlier this season and letting her know exactly how she felt about the way she was playing.

"Honestly, I thought Sav started the year off pretty slow," Hutchcraft explained. "We had really seen her improve over the summer, and during our first few games in our tournament [Dandra Thomas Invitational], she didn't play very well. Three or four games later, her and I had a moment at Greenwood where I had to have some tough love with her.

"When I had to have that moment of tough love, we haven't looked back. It wasn't that we had to make her mad, it was just time."

Whatever was said during that conversation apparently sparked a fire under the 6-4 junior center because she's had no problem being tough on defenders since then.

On a team where its leading scorer, Chloe Clardy, is rated as one of the top 40 juniors in the nation, its sharp-shooting off-guard, Jaiden Thomas, has signed with Louisiana Tech, and its supporting cast and bench could rival that of some colleges, Scott has flourished. She averaged 15 points, 9 rebounds and 4 blocks in the 4 games following that 62-37 win at Greenwood – a game where she finished with 17 points, 12 rebounds and 8 blocks.

Still, it wasn't until the Lady Wampus Cats went to Duncanville for the Sandra Meadows Classic that others began to see how much of a force she can be.

Scott averaged a double-double during the team's five-game run, including a 26-point outing against Clovis (Calif.) West in the quarterfinals. Whereas Clardy was awarded the tournament's top offensive player honor, Scott was chosen as the event's best defensive player.

"I think I've done OK, but of course, I'm always wanting to get better," Scott said. "I stay in the gym, and I think hard work pays off. I take it one step at a time, one game at a time. But at the same time, I try to keep the same mindset, and that's to go in and dominate."

And dominate she has, especially since her and her coach's stern talking last month. That heart-to-heart wasn't about finger-pointing or laying blame anywhere, according to Hutchcraft. It was solely about getting her premier frontcourt star to be the domineering player she's seen her be throughout her career, particularly on offense.

"A lot of people don't understand, when teams double down on Savannah, that leaves someone else open," Hutchcraft said. "That changes our game offensively a little bit. Her presence on the defensive end, she alters people's shots even if she doesn't get a block. And I think for her, we've been focusing on that look.

"But on offense, we're like ,'Look, you're going to draw two people every night, especially in Arkansas, so what else are you gonna do?' So I think she's developed that mentality that if we miss shots, she's gonna get the rebound and score. She relieves things a lot for Chloe and others because when she's hitting inside, it opens things up on the outside. Her teammates are doing an excellent job of finding her, too."

Scott admitted there are games where she's juggled roles, such as rebounding more on one night or scoring more on another. But to her, it's about what her teammates need her to do.

The easy answer for Scott has been the same ever since she was moved up as a freshman.

"It's whatever they need," she said. "Whatever coach needs, whatever the team needs, I'm going to do it. They don't always need me to score. But they do need me to be consistent in whatever role."

Right now, Scott's job is to continue to play at a high level because the Lady Wampus Cats are routinely going to get everyone's best shot.

The difference, however, will be how they respond and react. Conway still has at two games each against No. 2 North Little Rock, No. 3 Fort Smith Northside and No. 7 Little Rock Central, all before state tournament play begins. But Scott isn't necessarily concerned about future opponents as she is about her own unit.

"When we start playing selfish, we don't flow," she said. "It's when we play as a team that'll get us to where we want to be. We can score, but when we play defense, get stops, get steals, that's when we're at our best. But we're not at our peak just yet.

"We're in a pretty good spot, but nowhere near our peak. I just think that with more practice and more work, we're going to be at that point by March."