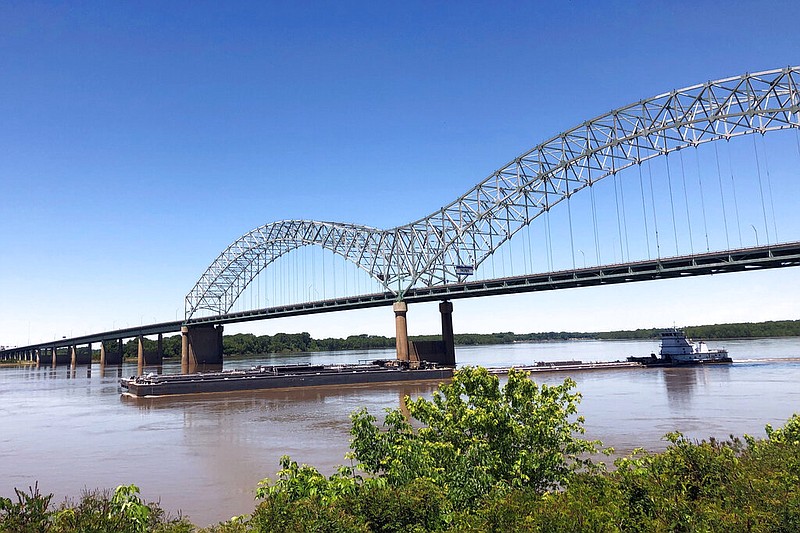 A tug boat, seen from the Memphis side of the Mississippi River, pushes barges down the river and under the Interstate 40 bridge linking Tennessee and Arkansas in this May 14, 2021, file photo. (AP/Adrian Sainz)

The routine inspection performed on the Interstate 40 bridge over the Mississippi River at West Memphis last week is part of the Arkansas Department of Transportation's new routine in keeping the structure safe.

The inspection is the first of several that will take place on the bridge as part of a beefed up protocol that was created in response to a significant fracture that was discovered almost by accident on May 11.

The fracture, which compromised the integrity of the bridge used by 40,000 vehicles daily, forced its immediate closure. The crossing, also called the Hernando de Soto Bridge, wasn't fully reopened to traffic until almost three months later, on Aug. 1, only after $10 million had been spent on emergency repairs.

The closing of the bridge compromised a key freight corridor through the middle of the United States and cost the industry millions of dollars in delays and added fuel costs.

The episode led to the firing of the leader of the team responsible for inspecting the bridge and the retirements of the leader and his top assistant over the department's heavy bridge maintenance section, and an overhaul of its policies and procedures.

The department is responsible for inspecting and maintaining 60 of the largest and most unique bridges in Arkansas, including the I-40 bridge that connects West Memphis and Memphis.

The results of an agency investigation, a Federal Highway Administration review and a forensic analysis of the fracture all led department leaders to conclude that among the "changes/enhancements to strengthen and improve" the bridge inspection program was placing the heavy-bridge maintenance section "under new management," according to an After Action.

The report said the bridge inspector missed the crack during inspections in 2016, 2017, 2019 and 2020. The 2018 inspection was done by an inspector who had never inspected the affected part of the bridge. He since has been counseled and will receive more training.

The review found that the culture fostered by heavy-bridge maintenance program management allowed shortcomings and shortcuts to be overlooked and suggested that the fired inspector's deficiencies were common knowledge within the program.

Ultrasonic testing is being employed to augment the typical visual inspections that were the practice before the fracture was discovered. Ultrasonic testing focusing on welds can reveal tiny cracks unable to be detected by human eyes.

The department's after-action report released in November recommended periodic ultrasonic testing to, among other things, "specifically look for any crack advancement from the interior surface of the welded joints."

A consultant employed to conduct last week's inspection also was trying to determine what, if anything, needs to be done about the paint on the welds, Parker said.

"The existing bridge has painted steel, some of the paint has shown to have lead," he said. "We would reapply non-lead paint if any paint is removed. To perform the ultrasonic testing, sometimes the paint has to be removed to get good results, depending on the paint thickness.

"The consultant needed to perform the ultrasonic testing at a couple of welds with the paint in place, to see how clear the test results are, to determine whether they will need to remove the paint at all other locations before they mobilize the full crews to begin additional ultrasonic testing of these box girders."

Other changes now part of the heavy maintenance inspection program include incorporating the use of drones and having a professional engineer oversee the inspections on-site, Parker said.

"Please note that a visual inspection of this portion of the bridge was completed during the bridge closure earlier last year," he added. Nothing of major concern was discovered at that time. The inspection that is scheduled for later this year will include the ultrasonic testing as an added safety precaution."

Parker put the price tag of this inspection at $1.5 million, which includes the inspection, the ultrasonic testing and the engineering analysis.

The cost of all inspections and maintenance on the bridge is evenly divided between the Arkansas and Tennessee transportation agencies under a long-standing sharing agreement.

The bridge also will be due for what is called its fracture-critical inspection, which is performed annually. The I-40 span at West Memphis is considered fracture-critical because if one of its components under tension fails, the entire bridge could collapse.

Non-fracture-critical bridges can go two years before an inspection is required under national bridge standards.

"Since we completed the last full inspection while the bridge was closed last summer, it is due again by the end of this summer," Parker said. "With a bridge of this size, inspections may be spread out over the year, depending on the type of inspection and different portions of the bridge."

Print Headline: I-40 span gets first checkup by state