OPINION | SPIRITS: Much ado about bourbons — the Old Tub legend 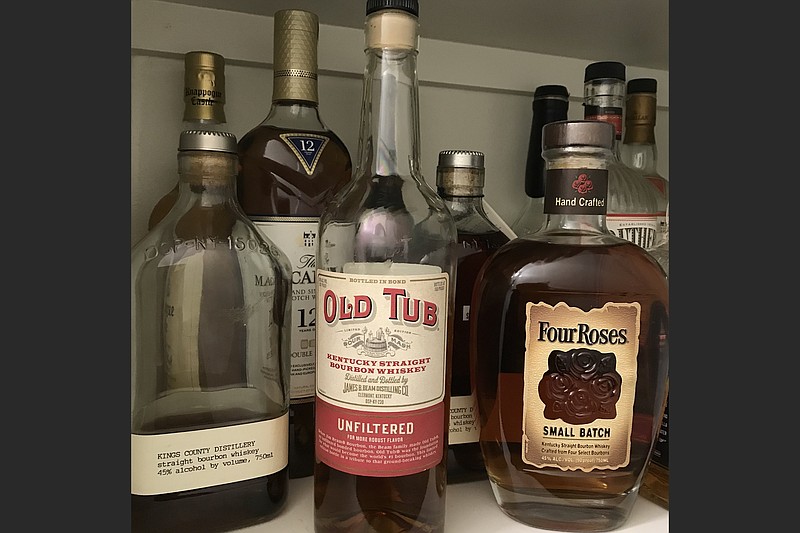 On the last night of 2021, we had the Lawyer and his wife the Deacon over to the house for an early-evening cocktail hour.

This is something we've been doing these past 21 months: maintaining some social connection through small gatherings of close friends. We've stayed away from parties and restaurants and anything we thought might turn into a super-spreader event; I could happily turn inward and live within the confines of my own rooms and mind were I not periodically reminded of other people.

Live friendship is sustaining, and though one might be able to wean oneself off it, I can't see how that would improve anything. So much of our lives now are forced through electronic and digital filters that we sometimes forget how not to be performative.

So we assume whatever risk there may be in allowing sensitive and alert people into our house, to be greeted and sniffed by little dogs, to consume snacks and wine and liquor. "Drinks" is the occasion, the pretext for the exercise, but the real reason is to practice sociability.

Because he is a gentleman of the antique order, the Lawyer brought us a bottle of wine and a bottle of whiskey. The whiskey was a modest bottle of Old Tub, a popularly priced product from the James B. Beam Distilling Company, a subsidiary of Suntory Holdings of Osaka, Japan, which produces a lot of bourbon whiskey, some of which I know well.

Old Tub, however, was new to me, which was the point since the Lawyer and I share an interest in bourbon whiskey and enjoy exploring the more modest end of the market. Our studies indicate that no matter how cheap or indifferently marketed, there is no bad bourbon to be had — so long as the product in question meets the legal guidelines for bourbon.

Those rules, established by the U.S. Congress in 1964, hold that in order to be called "bourbon," the liquor must be distilled from a fermented mash of grain, at least 51% of which must be corn, bottled at between 80 and 160 proof, aged at least two years in new charred oak barrels, and produced within the United States of America.

(People often say that bourbon must be produced within the state of Kentucky because, I've heard it argued, only that state's limestone-rich soil is said to produce the right kind of spring water for distillation. But that's not true. Little Rock's Rock Town Distillery produces fine bourbon in Arkansas. I'm also fond of the straight and peated bourbons put out by New York's Kings County Distillery.)

Bourbon technically doesn't have to be aged, though if it's aged less than four years, that must be stated on the label.

Given this fairly stringent recipe, it's not surprising that even modestly priced whiskeys like Rebel Yell and the Olds — Old Crow, Old Forester, Old Grand-Dad — are perfectly drinkable and likely to appeal to some palates.

One of the best things about being mainly a bourbon drinker is that while there often seems to be a clear difference in flavor profiles and perceived quality as you go up the ladder in the Scotch, gin and tequila categories, such is less the case with bourbon. (I'm exempting vodka because I typically prefer lower-priced examples, which are typically meatier and more tasteful. High-end vodkas aspire to disappear on the tongue.)

For instance, I can understand why someone might be spoiled by habitual exposure to, say, Johnny Walker Blue Label (which goes for upward of $220 for a 750mL bottle) or Macallan 18 (recently priced locally at $371). Once you've become accustomed to drinking the good stuff you might not be satisfied with a more downmarket model.

The same is generally true for wine — I remember occasions when someone has poured me a glass of an excellent vintage and I immediately understood why people with the wherewithal to spend hundreds or thousands of dollars on a bottle would do so.

And this is someone who can genuinely enjoy Carlo Rossi's Paisano jug blend.

And while I like Pappy just fine, I can't say I liked it better than other bourbons with a similar "wheated" profile (in which wheat is the second most common grain after corn in the mash bill, as opposed to the more common rye) such as Marker's Mark and WL Weller (which uses the same mash bill as Pappy's but is aged for different amounts of time and in different warehouses). It's not that you can't tell the difference because you can — it's just a question of preference.

That's not to reflexively dismiss the correlation between price and quality; often you do get what you pay for. Depending on what you care about, it can make sense to spend big money on things you deem special, even if some people might struggle to discern the difference between McLaren and Mazda.

Not being able to afford Pappy's doesn't bother me; I drink more high-rye bourbon than wheated. Old Grand-Dad's Bottled in Bond (which means it's aged four years and bottled at 100 proof) is maybe the best bargain out there for $25. I also usually keep a bottle of Four Roses Small Batch Select (about $65) and Knob Creek Single Barrel ($50) around as staple high-end sipping bourbons.

Despite writing this column occasionally, I don't consider myself a whiskey nerd in that I don't follow the whiskey blogs, or spend much time chasing interesting bottles from liquor store to liquor store, or think about mash bills.

So I looked them up for the whiskeys just mentioned. Old Grand-Dad Bottled in Bond's bill consists of 63% corn and 27% rye (very high). Four Roses Small Batch is blended from several whiskies containing from 20% to 35% rye, with the rest corn. Knob Creek Single Barrel's bill consists of 75% corn, 13% rye and 12% barley.

So I'm all over the map. And if you blindfolded me, I probably couldn't tell you which bourbon was which. That would be beside the point anyway. Most of what we perceive as the romance of the things that we buy is a legend shaped by some marketer. Everything needs a story, we need to know something about the things we consume — where and by whom they were made, how they have manifested throughout history.

That's why all the whiskey bottles have pictures of the men who allegedly first cooked them up on their labels, and many have dubious origin stories.

I didn't know the story of Old Tub, so the Lawyer told me.

It is, he said, kind of a forerunner of your standard Jim Beam bourbon, a bottled-in-bond non-filtered everyday whiskey with a mash bill identical to my beloved Knob Creek (also a Jim Beam product). The brand's name is a reference to the large tubs in which mash was mixed, cooked, and stirred by hand. In the 19th century, before glass bottles became the industry standard, customers would often fill their jugs directly from these tubs.

Up until June 2020, Old Tub had been continually distilled, but it was only sold in 375mL bottles at the distillery's gift shop in Clermont, Ky. When they first began distributing the brand through liquor stores in 750mL bottles, it was touted as a "limited release," but it still seems pretty easy to find. For about $22.

And it's good. Because it's bourbon and it has all of alcohol's social lubricating properties; it works as a solvent on the inhibiting stiffness one might feel when beginning to converse with another human being. It produces a warm tangle in your gullet that feels like well-being. And it comes complete with a story that can serve as conversational tinder.

But the whiskey is never the most important thing at any social gathering — if it is, you should probably think about your life choices.

The point of getting together for drinks is never to drink, but to visit, to turn off the phones and iPads and spend a hour or two in the company of people you might not see as often as you'd like to.

The point of getting together for drinks is not to discuss mash bills and what is getting harder and harder to find on local shelves, but to refresh the relationships we have with people we want and need in our lives.