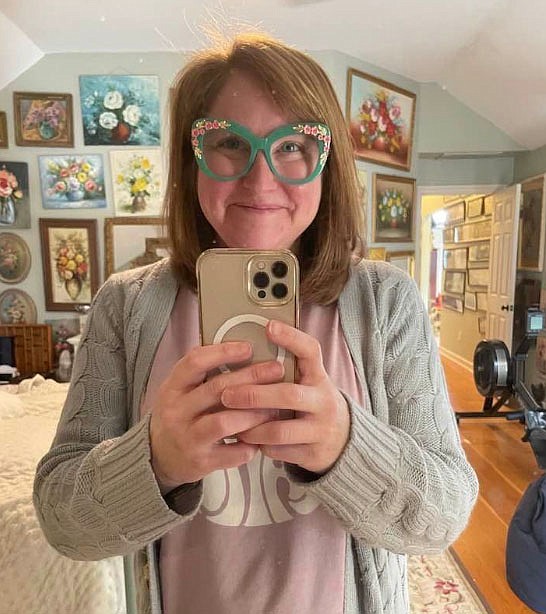 Lara Jo Hightower does not yet collect reading glasses, but this pair just might elevate them to that status. Among her active collections are American pottery in all colors; vintage floral prints; vintage bird prints; vintage and antique ornate mirrors; figurines of women; Toby pitchers; pitchers in the shape of animals; cake plates; mixing bowls; salt and pepper shakers; barware; landscapes; portraits of women; and animal figurines. (Courtesy photo)

We all have something -- or somewhere -- that fires up the serotonin just by holding it or seeing it: the woods where you grew up playing hide and seek, a cabinet full of your mother's old copper cookie cutters, the room in your house that makes you feel the most peaceful. In the feature "My Favorite Things," we invite Northwest Arkansans to share those special things or places that bring them joy.

Lara Jo Hightower was the writer of scores of profiles, arts stories and features on regional artists, makers and world changers for the Northwest Arkansas Democrat-Gazette until the first of this month, when she accepted a position as a marketing associate for TheatreSquared. A Fayetteville resident, she has been an avid collector with a serious thrift store/yard sale/estate sale/flea market addiction since she first started going to yard sales with her parents as a child. And now that we CAN write about one of her great collections, we couldn't help ourselves!

What I collect: Vintage and antique panoramic photographs.

How/when/why the collection began: I found my first panoramic -- a faculty photo from an unidentified college in what appears to be the 1940s -- at a yard sale in Chicago, about 20 years ago. That was my first introduction to panoramic photography, and I was hooked.

What appeals to you about these items? Everything. I'm a little obsessed with them. I think the major appeal is so many faces to look at -- and such a variety of expressions. It's easy to make up stories about what's going on in someone's head when the picture was snapped. I also love looking at the clothing that people chose in which to have their photograph taken in. Placement in the photo can be really interesting, especially when it's a workplace photo. I have a Dallas Garbage Division photo from 1938 in which the majority of the men in the photo are dressed in their work clothes, with a few men in suits, standing off to the side -- but one man in a dress shirt and tie, with his sleeves rolled up, is sitting in the front row in middle of a row of hard-working sanitation workers. He has a big smile on his face, and I like to imagine he was the boss that everyone liked because he appreciated the hard work of the sanitation employees.

What's the most expensive item in the collection? The vast majority of my photos were found for $10 or less. I pride myself on spending as little as possible! But as the collection has increased, I've gotten a little bit more amenable to spending more on something that's really unusual. I just spent around $130 (which is A LOT for me) on a panoramic photo of the White House reception for the third international conference of the Associated Country Women of the World in 1936. This was an organization created in the 1930s to amplify the voice of rural women in politics and cultural affairs, which is a pretty cool thing to have been created in that era. There are several things that make this one so special that I would spend that much money on it. It has hundreds and hundreds of women in the photo, all spread out on the East Lawn with the White House in the background. Many of the photos I have feature men either entirely or prominently, so to find a panoramic that was nearly all women was exciting. They're all dressed in their finest, which is quite a feat, considering 1936 was the tail end of the Depression years, and it's so much fun to look at all of their different dresses. But perhaps the most exciting thing about the photo is that, in the distance, President Franklin Delano Roosevelt and his wife, Eleanor, can be seen standing on the White House balcony -- and, yes, FDR is standing, braced behind a podium. I was so excited to discover that.

Is there "one that got away" – i.e., one you passed up and regretted not buying? Oh my goodness, YES. When I lived in Chicago, there was a flea market a couple of blocks from my house called the Broadway Antique Mall. I visited at least a couple of times a week, and I found this panoramic of the citizens from a smallish town on what was probably the 4th of July or some other citywide celebration. The photo subjects were grouped according to their positions in the town -- there was a marching band in full uniform, police officers and firefighters in uniform -- then the rest of the townsfolk, with some in military uniforms, lots of kids, and a few dogs. It was mesmerizing, but at the time I was trying to build my collection with finds "in the wild" -- i.e., photos that I found in thrift stores and yard sales that were super cheap. This one was around $80, if I recall, which, today, I would pay in a heartbeat. I got a false sense of complacency because the photo was in this booth for months and months, and I relaxed into believing it was never going to sell, until one day, I went to visit it -- and it was gone. I was absolutely heartbroken, and I think about it every time I walk past my photo wall!

Is your collection finished, or ongoing? If ongoing, will it ever be finished? It is ongoing, and it will never be finished. They bring me such joy, I could never pass one up.

What's the most meaningful piece in your collection, and why does it pack more of an emotional wallop? Military groups are the most common types of these group panoramics, and they are fairly easy to find. I have around six military photos, one taken in the middle of World War I, one taken in the middle of World War II. I find myself studying the faces of these men and wondering if they were scared or anxious, and if they came back at the end of the war. I love them, but they also make me feel sad, so they are both the most meaningful pieces in my collection as well as the ones I avoid these days unless there's something incredibly interesting about them that distracts me from thoughts of their mortality. My husband found one that he gave me for Christmas this year that's a giant group of Navy men of all ranks on their ship -- hundreds of them. By their uniforms, I'm guessing that it's from about 1917 and it might make me really sad, thinking of these men about to sail off into war, but one of the sailors is holding a cat in his lap and the men next to him have the biggest grins, as though it might have been pretty amusing, getting the cat up to its perch, so it quickly became one of my favorites.

Is there a white whale you're after? i.e., is there a specific piece out there somewhere that you're always hunting for? I'm ashamed to say that it wasn't until recently that I noticed the overwhelming lack of people of color in the panoramic photos I own -- a real statement on the segregation through most of the 20th century in this country. It's sobering as you're searching hundreds of faces for just one that isn't white -- and not finding a single one. My goal is to add more diversity to my collection, so that's what I'm looking for these days.

What else do you collect? Um, everything? I'm a magpie, packrat, hoarder, and I love just about anything that's 50-plus years old. Active collections include American pottery in all colors, with my biggest collection being matte white pottery; vintage floral prints for my bedroom walls; vintage bird prints; vintage and antique ornate mirrors; figurines of women; Toby pitchers; pitchers in the shape of animals; cake plates; mixing bowls; salt and pepper shakers; barware; landscapes; portraits of women; and animal figurines. 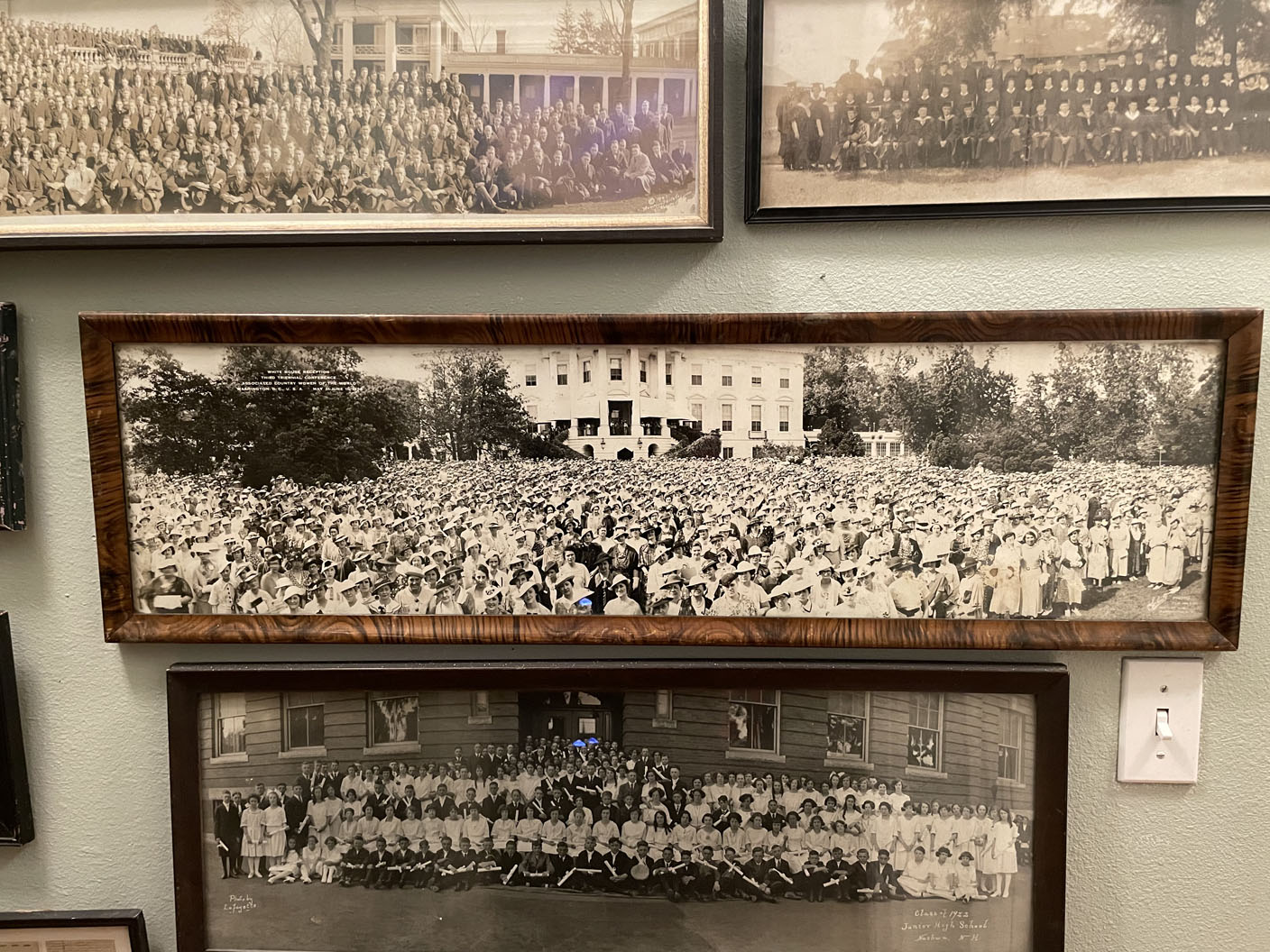 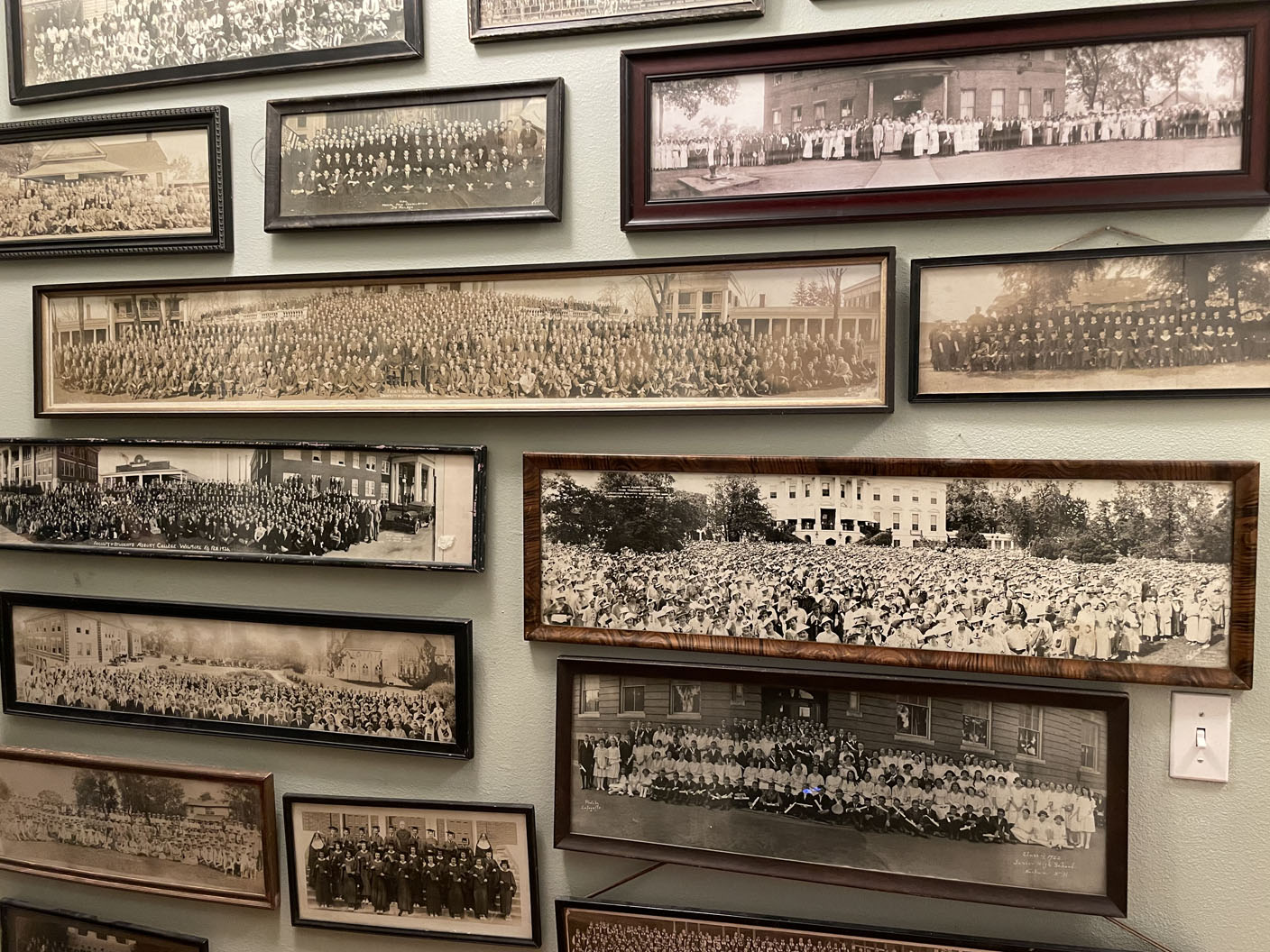 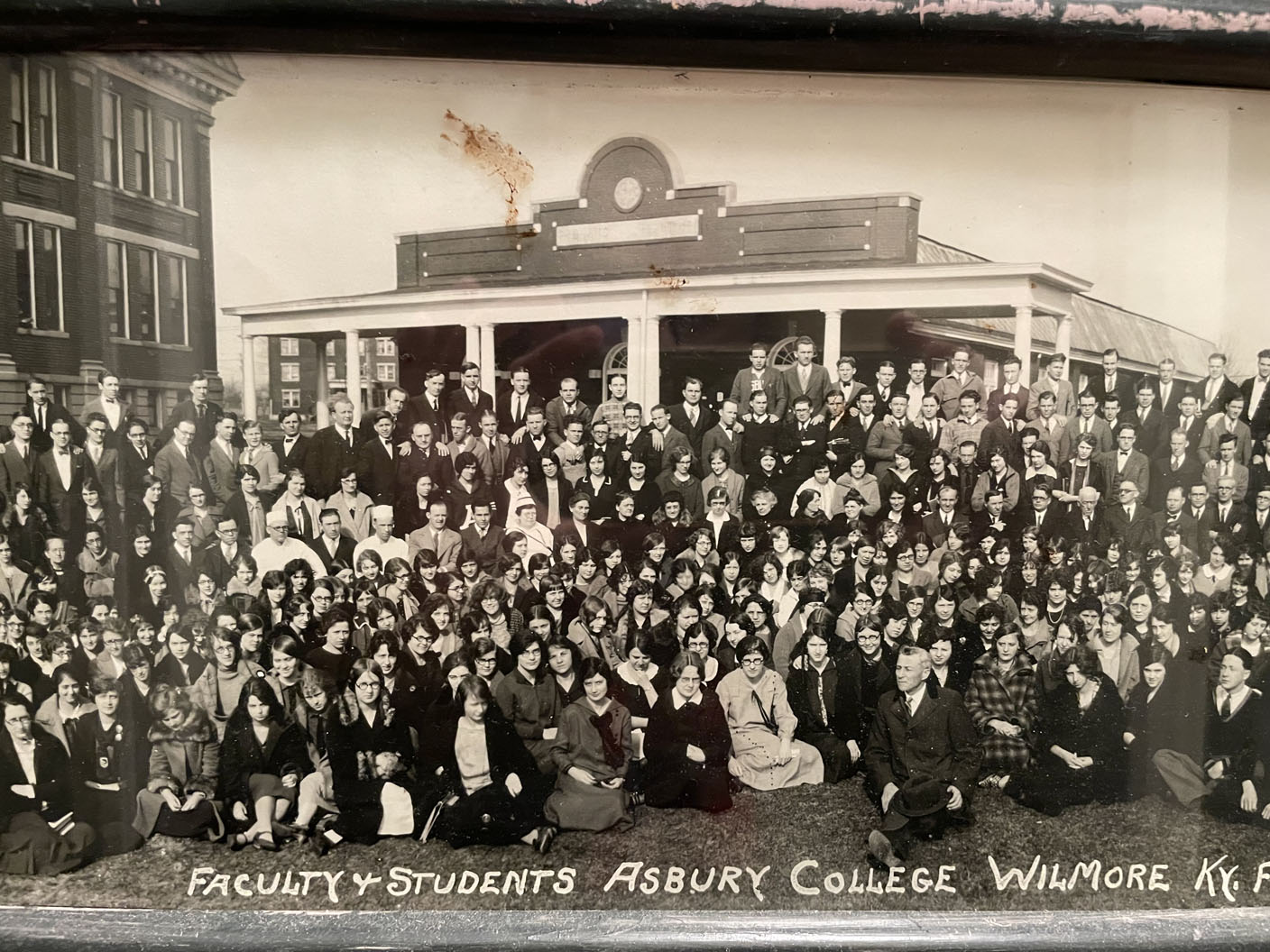 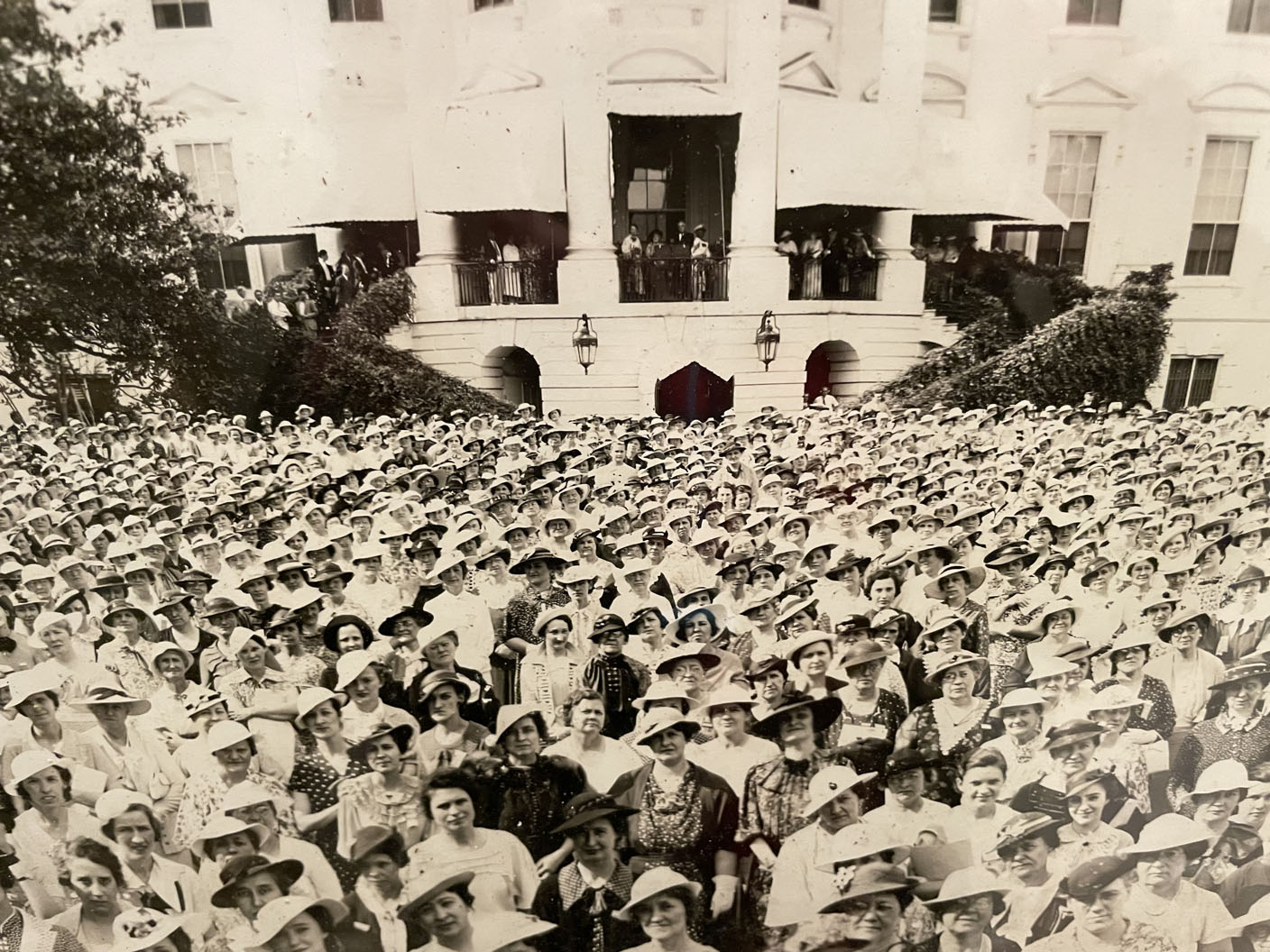 Hightower says this portrait of the White House reception for the third international conference of the Associated Country Women of the World in 1969 is her favorite for a few reasons: first, because it features one of the largest groups of people in any of her photos; second, because the women’s dresses (and hats!) are so interesting to study; last, but certainly not least, because the photo appears to include President Franklin Delano Roosevelt and his wife, Eleanor, on the White House balcony in the background. (Courtesy photo) 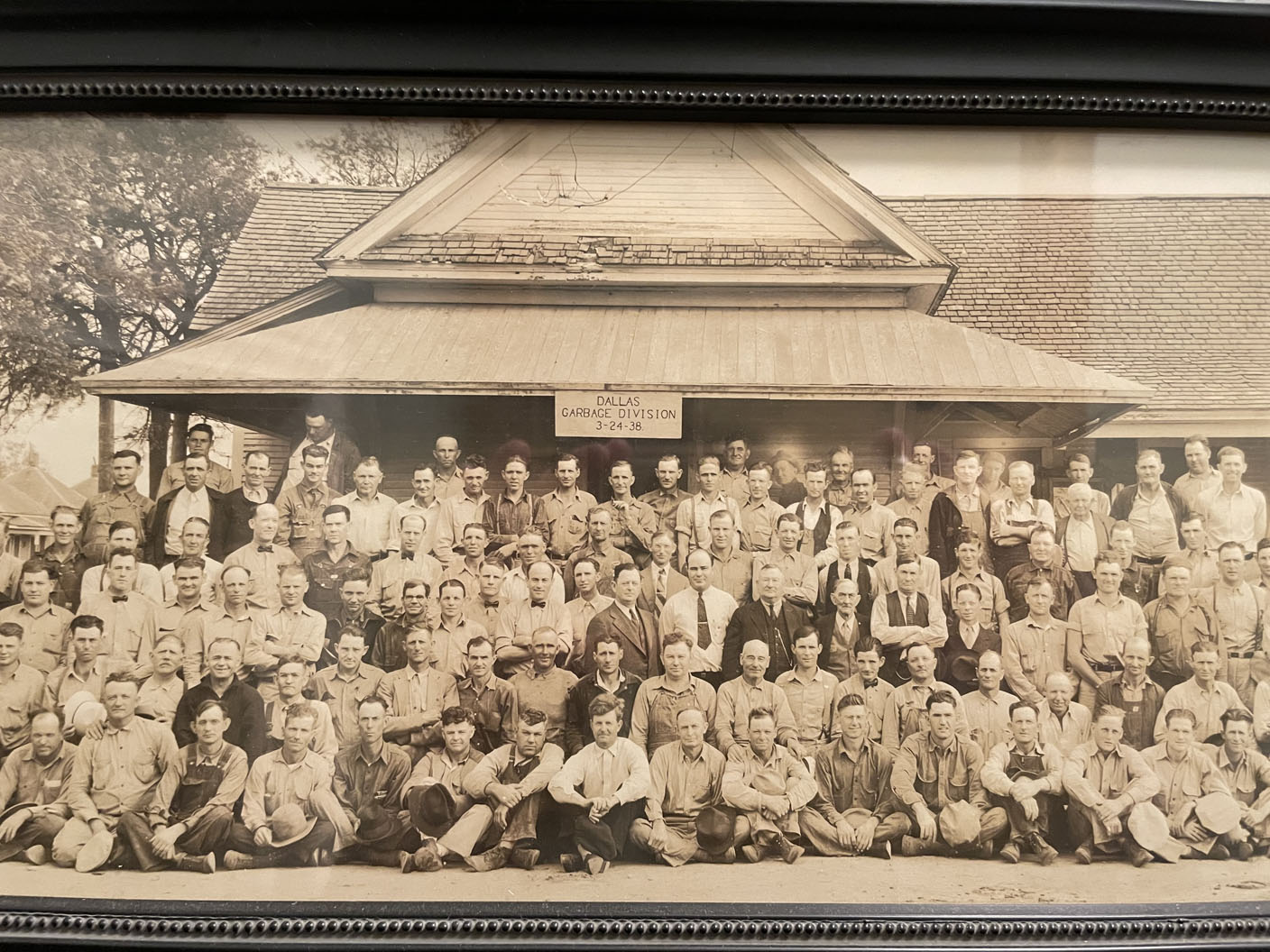 This photo of the Dallas Garbage Division from 1938 is fascinating, says Hightower, because of the apparent big-wig sitting on the ground in the front row, suit coat off and sleeves rolled up. (Courtesy photo)