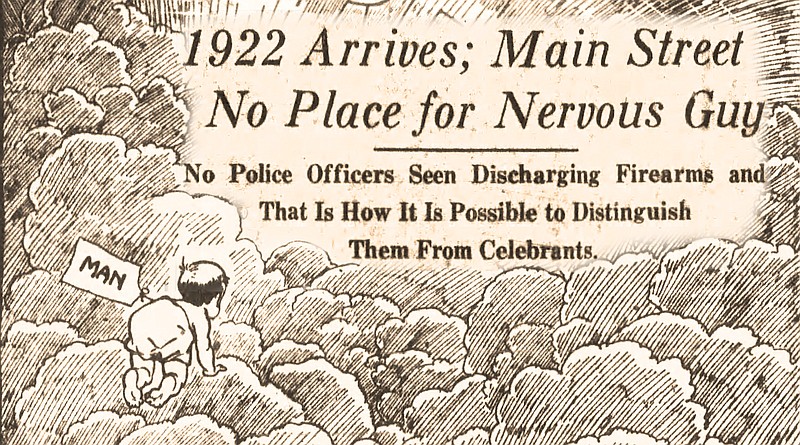 One hundred years ago, Arkansans celebrated the end of one bad old year and the beginning of a year with no mistakes in it (yet) by making a bunch of mistakes all at once, as soon as the midnight whistle blew.

I enjoy reading old accounts of mayhem, don't you? They are much more fun than, say, Tuesday's news that a 46-year-old man's back was grazed by a bullet that fell from the sky above Heinke Road in Little Rock during the first half hour of New Year's Day 2022.

As the Democrat-Gazette's Neal Early reported, "While police don't know where the bullet came from, shootings in Little Rock that night became ubiquitous with celebratory gunshots taking place through the night and early morning" (see arkansasonline.com/110today).

Compare and contrast this contemporary New Year's soundtrack with how the long-ago Arkansas Gazette described New Year's 1922, when promptly on the stroke of 12 "the lid blew off 1922, and 1921 died a hard and noisy death."

"Staid old Main street, which around midnight as a rule looks more or less like the cemetery of an abandoned mining camp, only quieter, was no place for a nervous person."

The reporter opined that "whoever organized the impromptu automobile parade which countermarched the length of Main street with side excursions did a right fair job of organizing. The parade paraded, and that's about all that can be said of the best of them.''

Prohibition was the law of the land in 1922. And yet (#andyet) public intoxication was much in evidence that night. As the Gazette put it, "The officially late lamented J. Barleycorn staged a come-back in some sections last night, and even downtown and out in the open the proud result of having-had-it or knowing-where-it-is were highly visible.

"On the whole, however, there wasn't so much New Year spirits evident as the occasion seemed to warrant. Some of the more enthusiastic had started the celebration too early, and apparently didn't like what they already had."

Here let us pause to admire the tact with which this unnamed reporter conveys information about tummies.

The Gazette man continued, "Downtown last night swelled like what used to be called a quiet day on the Western Front, but, despite all the powder burned, and even the revolvers fired from automobiles, no accidents had been reported early this morning."

Little Rock patrolmen and detectives did charge five people with discharging firearms. Also, they arrested three celebrants for being drunk, two for reckless driving and one for speeding on Main Street.

In contrast, the rival Arkansas Democrat's New Year's afternoon reporter was so philosophical we might imagine he wrote about events before they happened:

"On the instant the minute hand touched the dot bedlam broke loose."

The big whistle of the Missouri Pacific train yard blared, followed by factory and locomotive whistles all around town. Automobile horns joined in, and ...

"On the sidewalks, merrymakers clapped each other on the back, shook hands and otherwise fittingly greeted the timid little infant, Nineteen Twenty-two, who figuratively came toddling in guided by the hand of old Father Time.

"In the midst of the din and blare many paused to wonder what things were destined to happen during the reign of the newcomer. For a moment a flickering sadness mingled with the merriment."

The next paragraph assured readers "the optimism which everywhere prevailed was not artificial and transitory. There was a genuine feeling that the pealing of the New Year's bells had a gladsome significance and brought a message of good cheer."

Whoever he was, Mr. Democrat went on scattering rose petals:

"There were dances everywhere about town — some public, most of them in private homes. The downtown crowds caught glimpses of pretty bare shoulders, partly revealed, as plate-glassed limousines glided by bound for jazz parties. The horns squawked and the rattlers sent forth their rasping tones."

"Now and then a furtive pair would dart down a side street with quick steps, slip into an alley to come forth a moment later wiping their lips with their new silk handkerchiefs and stepping with still quicker steps."

Eight months later, John Cabaniss was killed in the line of duty. His partner, Ollice N. Martin, soldiered on, becoming chief of detectives in the 1930s. In 1947, Martin became an even more sorrowful news story. After learning a bit more about these detectives, I almost veered off today's topic into their life stories; but Friend Reader might not have a clean hanky close to hand. Another time though.

Back to old mayhem: An intoxicated man shattered a window in Johnson's Cafe at 716 Main. This miscreant escaped.

The breaking of that window seems like ingratitude in addition to property damage. The cafe had just announced price cuts across P.G. Johnson's menu: 5 cents off all drinks, dairy lunches and canned soups; 10 to 25 cents off eggs and omelets, oysters, fish, seafood; and up to 75 cents off all large orders of steaks and chops.

Counting other windows broken for New Year's 1922, the Gazette reported that a battle of fireworks in downtown Pine Bluff about 1 o'clock in the morning smashed plate glass in Froug's, Rosenzweig's, McCain's and Adolph Blumenthal's stores.

Also, a blazing Roman candle set fire to an awning over the Riverside Cafe at 218 Main St. in Pine Bluff. The fire and police departments put that out quickly.

Here's my favorite New Year's 1922 incident report, and it's from Little Rock:

"An automobile parked near Capitol avenue and Louisiana street was slightly damaged when a torpedo on a street car rail exploded. Part of the metal of the missile casing was forced through the top of the automobile."