This week all the mystery plants were annual winter weeds. The mild, cool weather we had in the fall and early winter gave a quick startup to this annual problem. Weeds are rampant, and the recent cold spell did not seem to slow them down.  Here is the line-up: 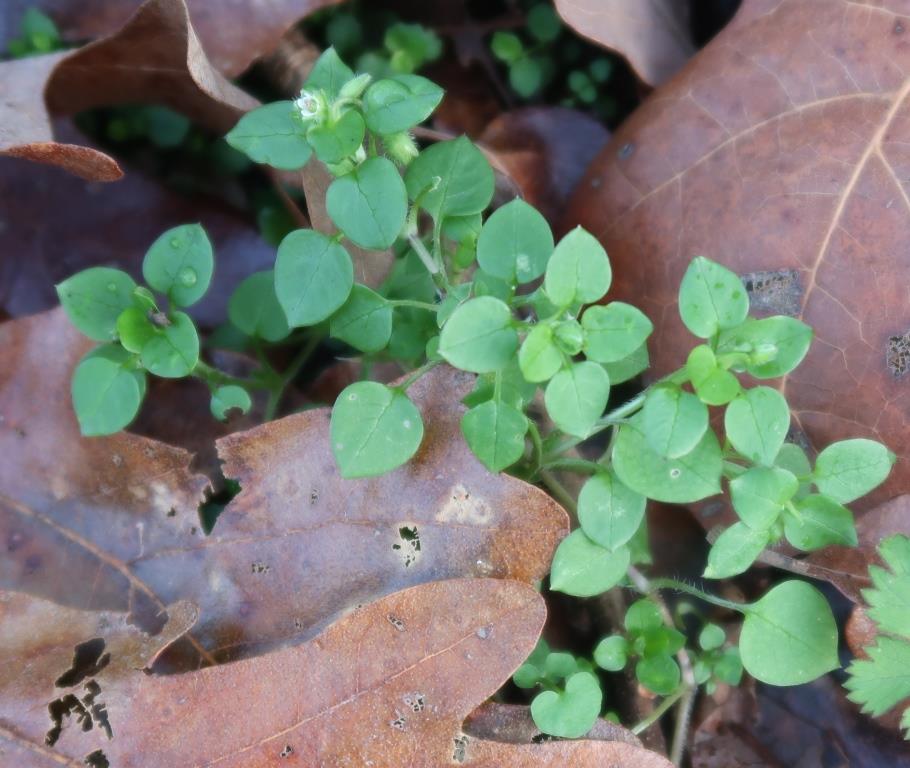 Chickweed - Common chickweed is a low growing winter annual weed native to Europe that germinates in cool, moist weather and grows until it gets hot. It is tolerant of a variety of conditions from sun to shade, but is happiest in moist, partially shady locations. Chickweed can bloom and set seeds five weeks after germination and will continue to bloom and set seeds for months. 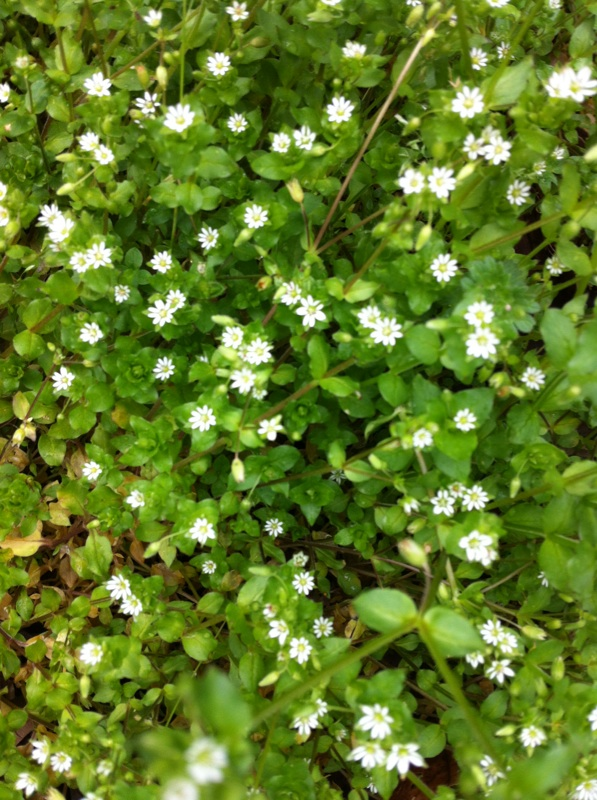 Each plant can produce over 800 seeds a season, and the seeds can lay dormant in soil for up to 10 years.  If you can’t beat it, eat it.  Chickweed is edible and often touted as a super food.  I have not eaten it, but it supposedly has a pleasant, mild flavor similar to corn silk (something else I haven’t eaten except when I don’t clean the corn well). It can be eaten raw, like sprouts, or used on sandwiches as a lettuce substitute, or in salads.  It also supposedly can be cooked and is a substitute for cooked spinach. 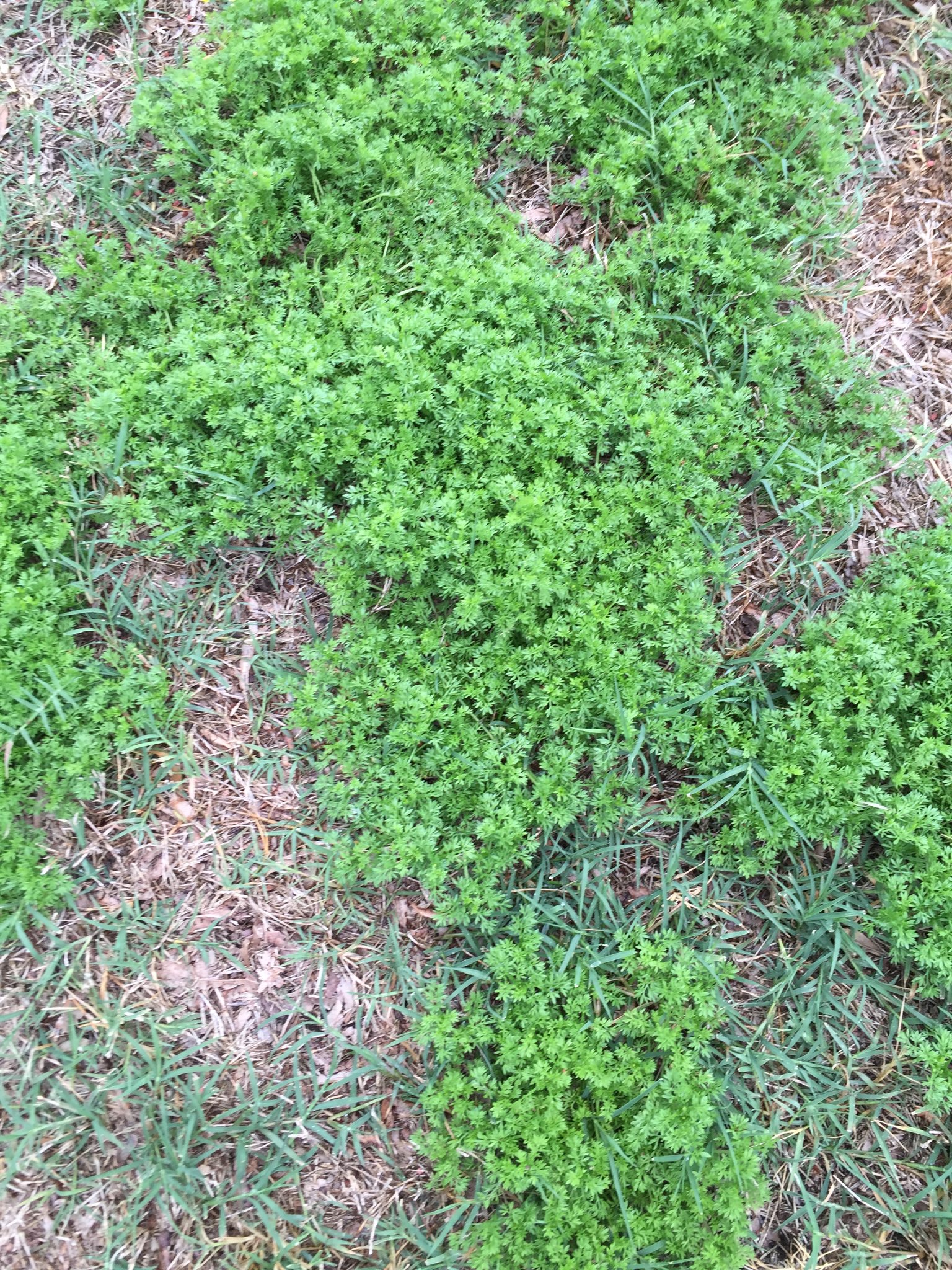 also known as stickers or burweed, is a winter annual weed. This weed has small parsley-like leaves that grow close to the soil line. 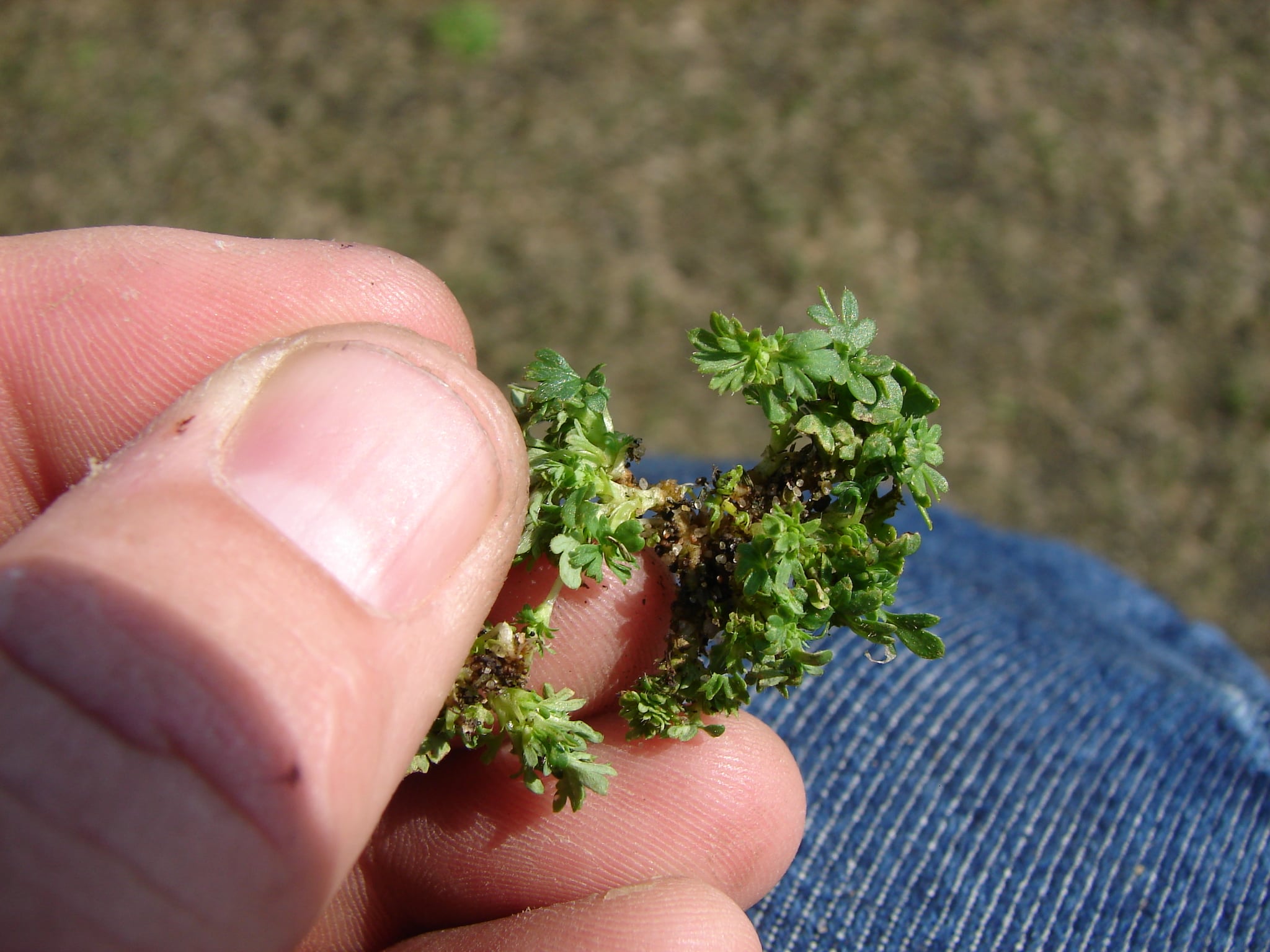 Spurweed germinates in the fall and winter months.  During the winter, spurweed remains small and low-growing where it usually goes unnoticed until the plant matures. As it matures, it produces tiny white blooms which are followed by a spiny seed. 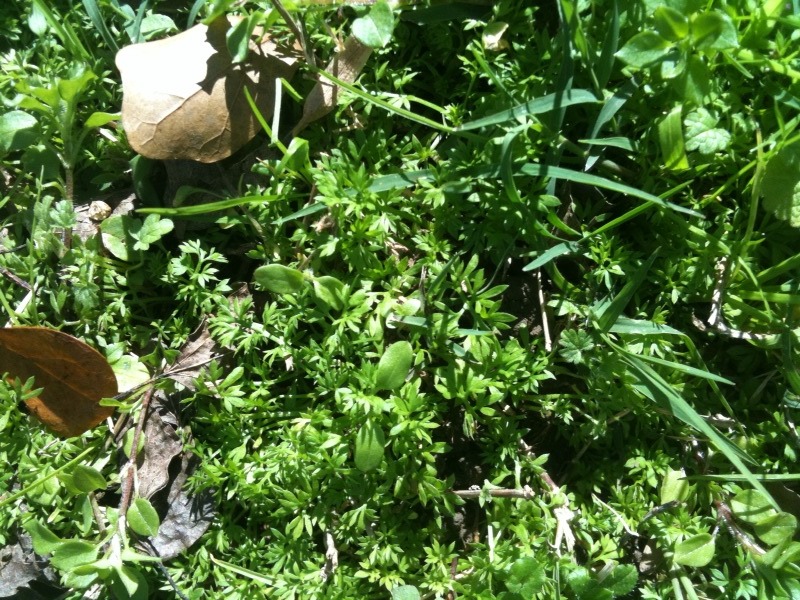 The stickers or spined fruits can cause a lot of pain if stepped on barefoot. I have had reports of dogs not willing to walk in the yard due to the painful spines.  Once the stickers are present, there is little you can do but encourage grass to grow around them to buffer the stickers. The spiny seeds are the end product of the weed, and can persist and come back to haunt you the following year.  Spurweed can be controlled by an application of just about any fall preemergent herbicide in late August or early September. 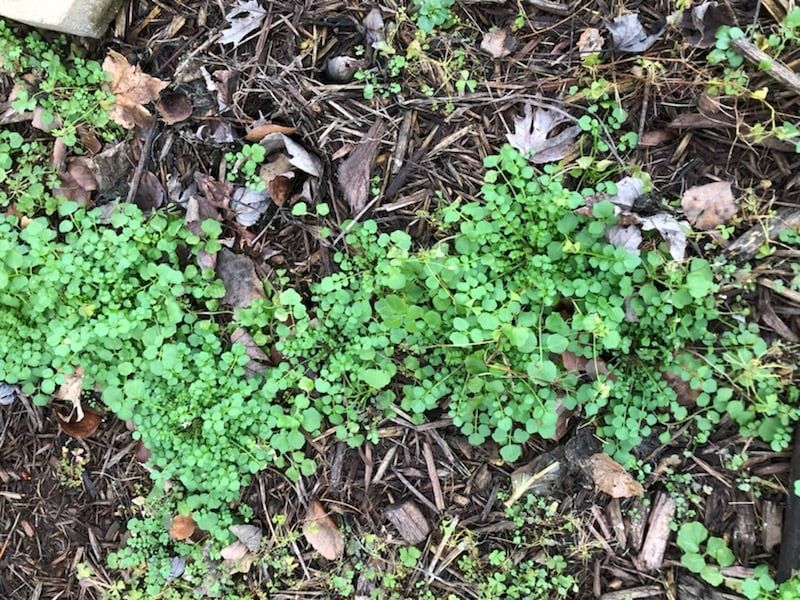 Hairy bittercress is a member of the mustard family. It germinates in the fall and will grow until it sets seeds and dies in the spring. It starts out with a low growing rosette of foliage.  With warmer spring weather it kicks into high gear, producing thin flower stems that can grow up to 9 inches tall, producing small white flowers with four petals that form in the shape of a cross. 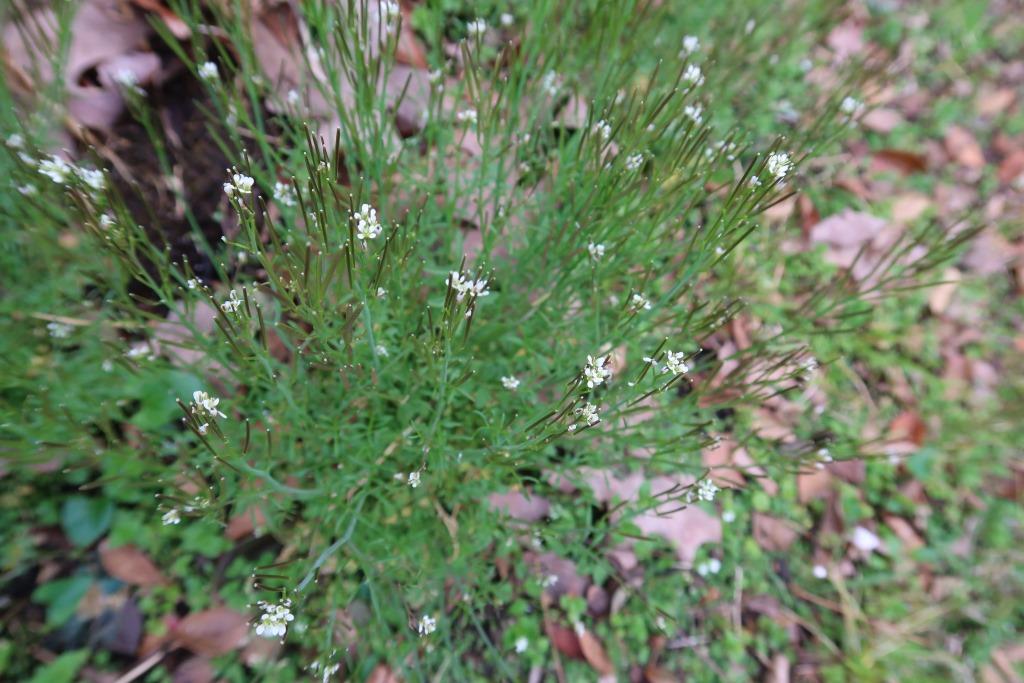 The seed pods that form are like small torpedoes.  When they are mature, they can explode, sending seeds flying in all directions, giving you more weeds next season. 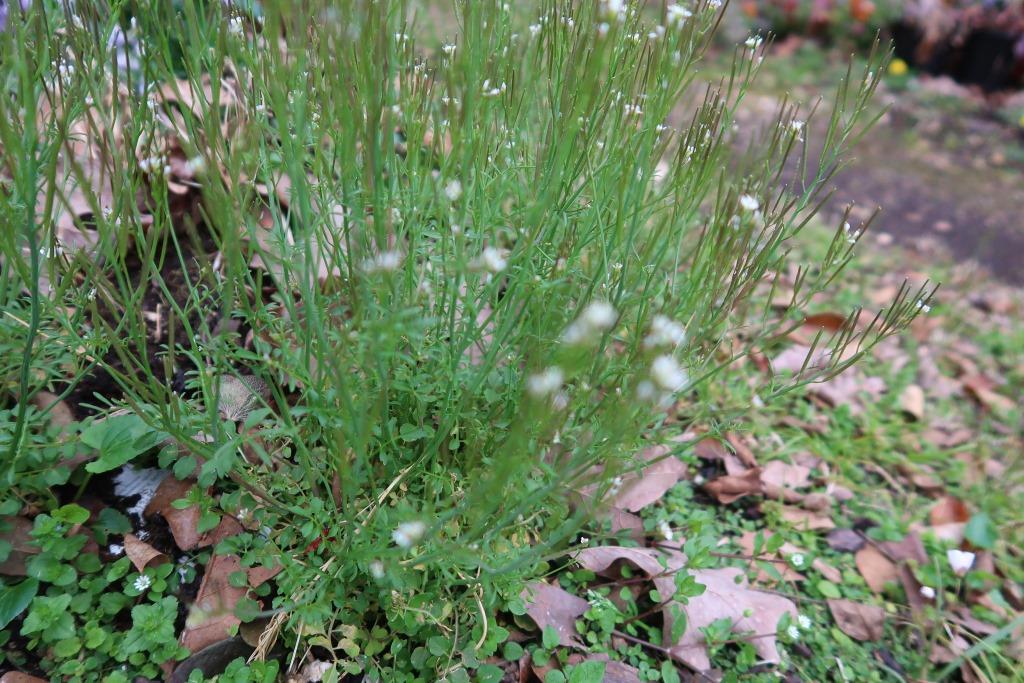 Hairy bittercress is a prolific seed producer. More than one generation can emerge in any given season because its seeds will germinate as long as the environment is moist and cool.  The most important step in eradicating hairy bittercress in your garden is to prevent the seed from blooming and setting seeds.  It is easy to pull or dig up, but people often overlook it until they see the taller seed spikes. Like chickweed, this weed is edible—but just the leaves (not the fibrous flower stalks or seed pods). The leaves contain antioxidants, vitamin C, calcium, magnesium, and beta-carotene. Unlike its name, the flavor is supposedly mild and peppery, not bitter. It is nice to add to a salad, a sandwich, or soup. Use it as soon after harvest as possible, as it wilts quickly.

When harvesting weeds or other wild plants for edible consumption, make sure they have not been sprayed with any herbicides or pesticides labeled for lawns not edible gardens.