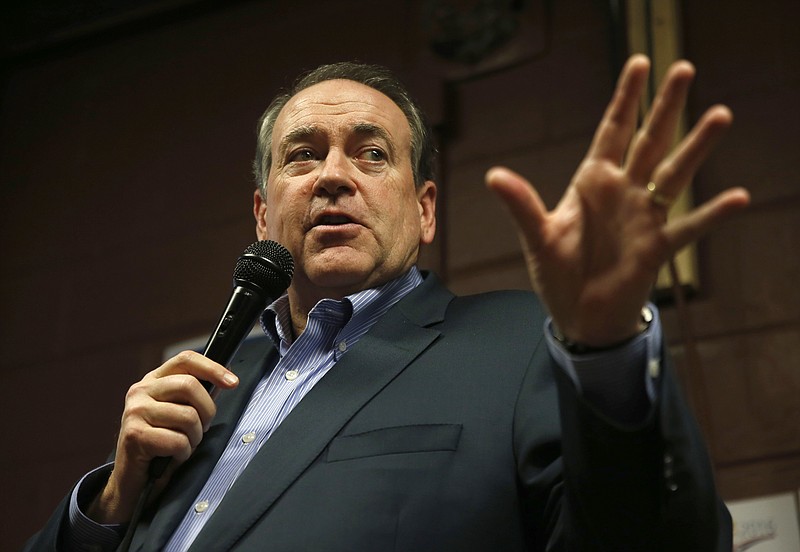 Former Gov. Mike Huckabee is the keynote speaker at next week's Martin Luther King Jr. Interfaith Unity Prayer Breakfast, a choice the state has defended amid objections from the Arkansas Democratic Black Caucus and others.

The event will be held at the Governor's Mansion on Monday and is organized by the Arkansas Martin Luther King Jr. Commission.

In a Jan. 7 open letter to the commission, the Arkansas Democratic Black Caucus said Huckabee, a Baptist minister and political commentator, is not the appropriate speaker to advocate for unity and cited several of his past comments, including indicating that former President Barack Obama pretended to be a Christian; attacking the Black Lives Matter movement; minimizing the Jan. 6, 2021, attack on the U.S. Capitol; and suggesting the suppression of voting rights through fraud and trickery.

"As leaders in this community, we will not sit politely and allow this event to occur without denouncing this choice. We must devoid this event of any positive value and stand up in dignity rather than sit silently in frustration," the group said.

The letter added that the group would not attend the event.

"Instead, we will join allies from across Arkansas in honoring Dr. King's legacy through service to our communities. We call on all Arkansans who support our stand to skip the 'invitation only' event and to let the MLK Commission know they should do better," said the caucus, which is an extension of the Democratic Party.

The commission is part of the Arkansas Department of Education. In a statement, Education Secretary Johnny Key said the holiday has, since its inception, been a day for Americans to set aside political differences and commemorate King's work.

"Our state has a history of current and former Arkansas elected officials from both parties speaking at King Holiday events. I fully support the work of the Arkansas Martin Luther King, Jr. Commission and Executive Director DuShun Scarbrough, including the invitation of former Governor Mike Huckabee as the keynote speaker for the Interfaith Prayer Breakfast," Key said.

Key added that he encouraged every Arkansan to set aside political differences on that day and "reflect on the progress we have made as a nation, as well as the significant ongoing work ahead to create a nation that offers liberty and opportunity for all."

Huckabee was governor of Arkansas from 1996 to 2007. His daughter, Sarah Huckabee Sanders, is running for governor this year. Both are Republicans.

"The simple fact that the invited speaker is the father of an announced candidate for governor begs the question, 'why would the Commission politicize a spiritual event this year and at this time when our nation is so divided over politics?'" the letter asks.

"Quite sad that a small group of highly-partisan Dems desecrate a tribute to MLK and create a manufactured story that even one of the state's most prominent Democrats (Skip Rutherford) publicly pushed back on," the former governor said.

Rutherford, a former chairman of the state Democratic Party, had tweeted a message highlighting Huckabee's achievements as governor.

"I disagree with those who say [Huckabee] should be 'uninvited' to speak at MLK Day. Read his speech at the 40th anniversary of the 1957 LR Central High Crisis; model how he compassionately welcomed Hurricane Katrina evacuees; & be grateful for his ARKIDS First leadership," Rutherford wrote Sunday.

"He has made racially insensitive quips and one-liners for years. These kinds of statements aren't funny and hurt the very people he claims to be trying to reach with his message," Mitchell said. "The Commission should not 'uninvite' Mr. Huckabee, but those of us who believe in the truth of Dr. King's message of unity and love will be elsewhere on the morning of January 17."