Beloved brioche: A king cake is a baker’s way to spread joy 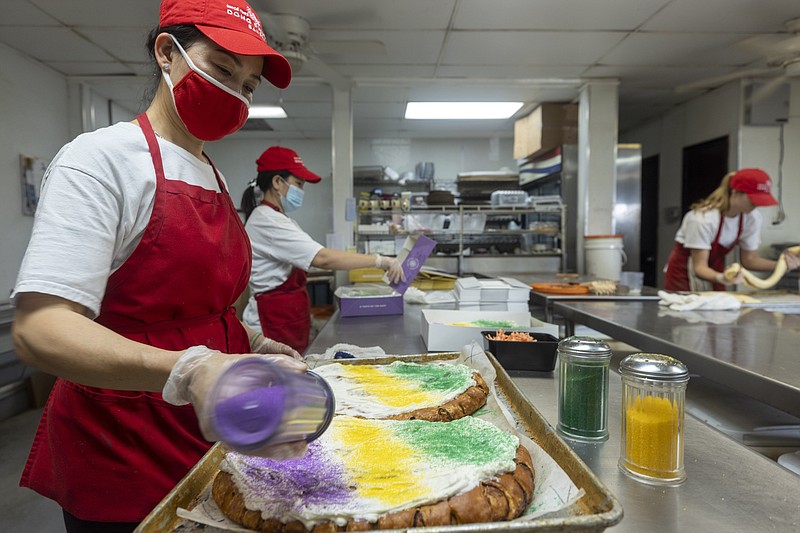 King cakes are decorated at Dong Phuong Bakery in eastern New Orleans. The colorful cake is more than a dessert — it’s the flavor of the New Orleans — and a diverse community of bakers are adapting the Carnival specialty to their own tastes. (The New York Times/L. Kasimu Harris)

NEW ORLEANS — When Dominick Lee was in elementary school in the 1990s, every year for Twelfth Night, the teacher would bring a king cake for the class to share. He and his classmates would wait for their slices — decorated with purple, gold and green sugars — eager to see which piece had a tiny plastic baby hidden inside. Whoever found it was responsible for bringing another king cake to school the next week, and the cycle would continue through Carnival season, right up until Mardi Gras.

"It was a really wonderful childhood memory, and it's stuck with me to this day," said Lee, a chef born and raised in New Orleans.

Nearly every New Orleanian has a similar story. King cake is a treasured sweet, and a beloved Carnival tradition.

And in New Orleans, where Catholicism is still the predominant religion, Twelfth Night, celebrated here on Jan. 6, holds deep significance. The date — also known around the world as Epiphany or Three Kings Day — marks the moment when the three Magi, or kings, reached the baby Jesus in Bethlehem. Celebrations vary, but in New Orleans, Twelfth Night is also the start of the pre-Lenten Carnival season, a cycle of baking and eating king cakes, with the arrival of many plastic babies.

Poppy Tooker, an author in New Orleans, said king cake dates back to ancient Rome and the Saturnalia Festival, a celebration of the god Saturn.

"The tradition goes, they bake the bean into the cake, which really makes it sound like a king cake," Tooker said. "When Rome collapsed, like so much in the Catholic Church in Europe, they took these pagan customs and adapted them."

King cakes are revered in New Orleans, so much so that it's considered sacrilegious to eat one before Jan. 6. Until the 18th century, king cake was largely eaten only on that day, to signal the end of the Christmas season. In the early 1900s however, some Carnival krewes (as parade organizers are known) like the Twelfth Night Revelers began to host balls, where they served king cake, selecting the "king" or "queen" based on which guest found the small trinket, or feve, hidden in the cake.

The New Orleans version of the cake, which Tooker said was most likely developed by 18th-century French and Spanish colonists, initially followed a basic structure: The oval-shaped pastries consisted of a brioche dough with hints of vanilla, and were covered with colorful sugary crystals and stuffed with the feve, initially a bean. In the 19th century, porcelain dolls were the feve of choice; in the 20th century, McKenzie's Pastry Shoppes, a local chain that closed in 2001, became among the first commercial bakeries to use a plastic baby, and others soon followed. Cakes also became sweeter and more Danish-like as king cakes became commercially popular.

"It is the emblematic dessert of the time," food historian Lolis Eric Elie said.

Today, the pastry has taken on a life of its own in New Orleans. Gambino's bakery serves a Bavarian cream king cake and a praline-and-cream-cheese king cake, among other varieties. Bywater Bakery has experimented with savory flavors, offering cakes stuffed with boudin, crawfish or spinach-and-artichoke dip. Haydel's Bakery's classic version is a popular favorite. And several bakeries, like La Boulangerie and Croissant D'or, serve galettes des rois.

"King cake season is this really communal experience that I think defines Mardi Gras New Orleans in general," said Matt Haines, the author of "The Big Book of King Cake," an archive of some of the city's tastiest cakes.

Dong Phuong Bakery, in New Orleans East, has embraced this idea. The Vietnamese bakery first started making the pastry in 2008, selling about 100 cakes for the entire season. Now, it averages about 50,000 cakes.

"We wanted to create an offering to the community," said Linh Garza, the bakery's president. "But we wanted to adapt it to our community, and our tastes."

Garza's family opened the bakery in 1982 after immigrating as refugees to New Orleans. Dong Phuong became a culinary respite for the area's Vietnamese community. And Garza's mother, Huong Tran, eventually became the mastermind behind the bakery's king cake. The recipe opts for cream cheese icing and uses a flaky brioche dough, offering more moisture than other versions, and a remarkably fluffy bite. Tran, who previously worked as a seamstress, added deep slashes to her cakes. 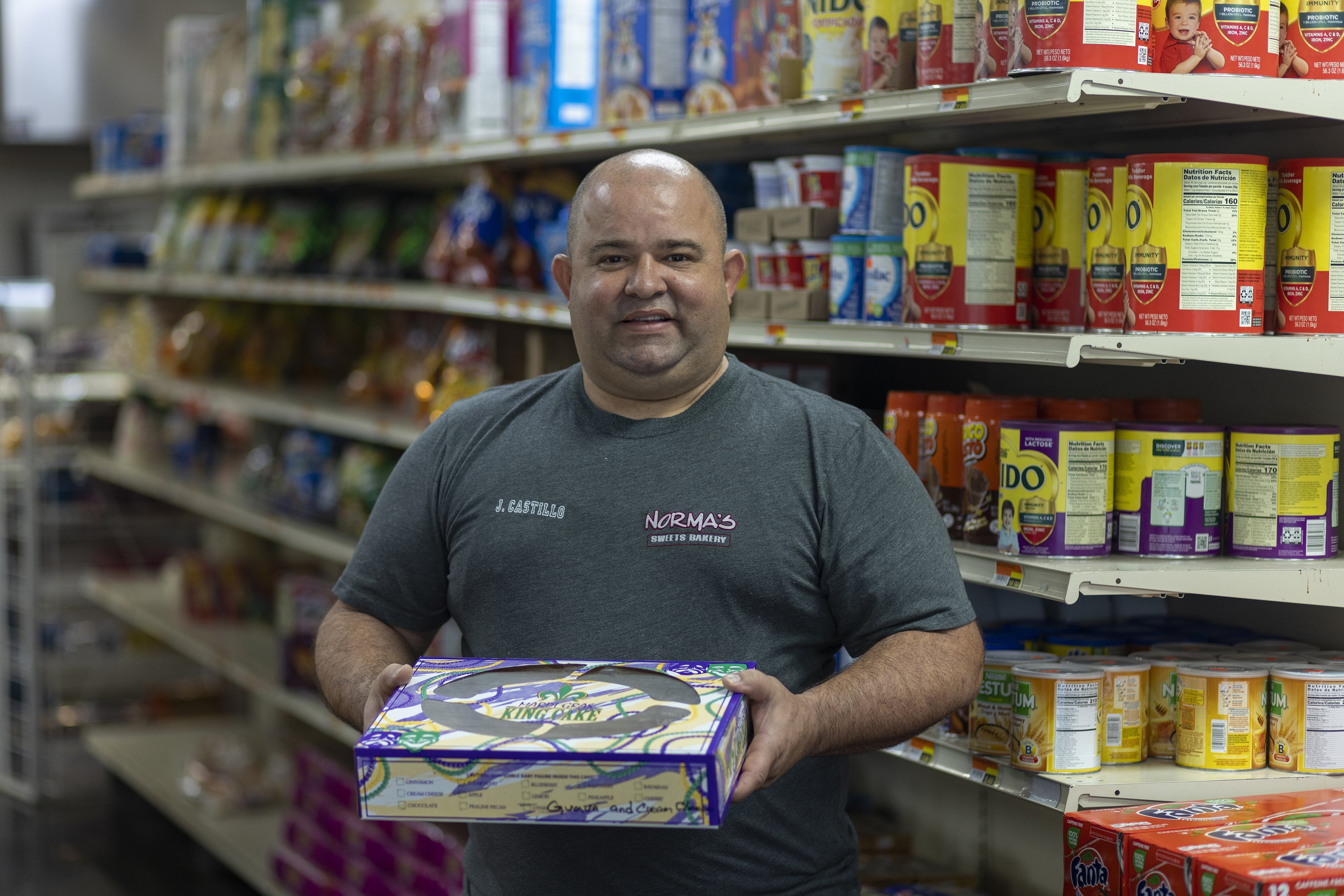 Jose Castillo holds a king cake at Norma’s Sweets Bakery in the Mid-City neighborhood of New Orleans. Castillo puts his own spin on the cake, just as many other chefs do during Carnival. (The New York Times/L. Kasimu Harris)
BUY HIM A KING CAKE

Jose Castillo was 5 years old when his family arrived in New Orleans from Villanueva, Honduras in 1981. After seeing the Three Kings Day tradition at school, he came home and begged his mother, Norma Castillo, to buy him a king cake.

"She was like, 'Really? We just arrived in this country!'"

At Norma's Sweets Bakery in the Mid-City — Castillo manages this second location of his mother's bakery — king cake has become an essential item. Filled with guava and cream cheese and covered in a light layer of icing, Norma's cake plays with the power of subtle sweetness, providing a crisp, fruity bite for all who indulge.

"We wanted to give the community a little taste of the Latin product," Castillo said of their use of guava filling. "Guava is our strawberry in Honduras, and we wanted to make something that allowed us to be part of the community, but that reflected where we're from, too."

In the French Quarter, Brennan's has found a pleasant intersection between simplicity and innovation. The storied restaurant started selling king cakes nationally in 2021, including a traditional take with notes of cinnamon and butter in every bite. 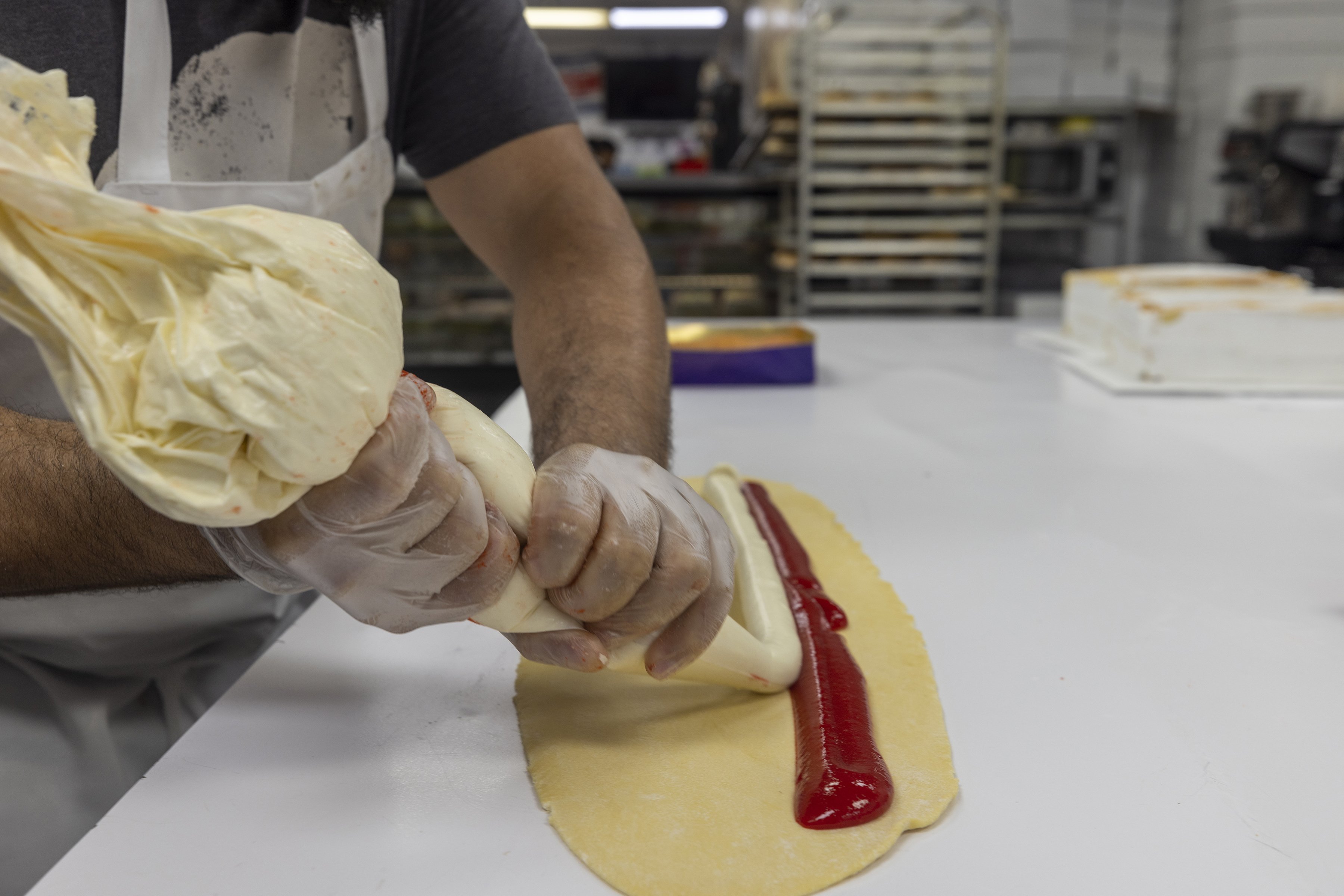 "It's really just a fun time for the city," said Ralph Brennan, an owner. "We all have these incredible memories of eating our favorite king cake and participating in the parade, and we want to be part of those memories for the next generation."

In 2019, Will and Jennifer Samuels founded King Cake Hub to centralize the array of king cake options for locals. The couple partnered with local bakeries and restaurants during Carnival season, eventually selling nearly 1,000 king cakes per day from pickup locations within New Orleans. Though Will Samuels died in September, Jennifer Samuels said she will maintain the hub, which many locals consider a godsend.

"I've had so much fun with this, so there was really not much thought of dropping it," Samuels said. "The feedback I got from the bakeries was about how much they had appreciated being a part of the hub, especially in the past year. For some of them, things were looking kind of shaky and we kind of helped put them on solid ground with those guaranteed sales every day.

"That's just honestly the spirit of the city," she added. "New Orleans is just a place where people find a way to make joy."