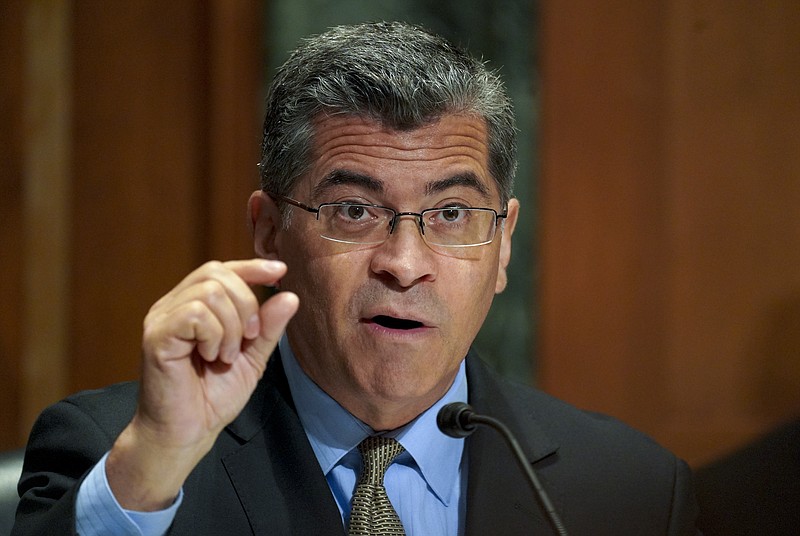 Health and Human Services Secretary Xavier Becerra has called for a review of a Medicare premium increase. MUST CREDIT: Washington Post photo by Bonnie Jo Mount

WASHINGTON -- The nation's top health official Monday directed Medicare to consider lowering the premium for the part of the program that covers visits to the doctor and other care outside hospitals. It marked the first time the vast federal health insurance system for older Americans and those with disabilities has rethought the monthly amount patients pay after a change has taken effect.

Health and Human Services Secretary Xavier Becerra gave the instructions to the Centers for Medicare and Medicaid Services, the agency that oversees the program, saying a review of the Part B premium is needed because of a price drop in a controversial Alzheimer's drug that Medicare does not yet pay for but might begin covering soon.

Becerra's directive comes just days before the agency is due to decide preliminarily whether to include the drug, Aduhelm, among the roster of medicines that Medicare covers. The Food and Drug Administration approved the drug in June, despite considerable dispute over whether there is enough evidence that it is effective.

Medicare is currently covering Aduhelm on a case-by-case basis.

Aduhelm's manufacturer, Biogen, set its initial price at $56,000 -- sparking an outcry from both the drug's proponents and its critics. That price tag was part of the reason that, when the Medicare agency announced the Part B premium for 2022 in November, the monthly amount consumers must pay rose from $148.50 to $170.10.

The increase is the largest in dollar amount in the program's history, which dates to President Lyndon Johnson's Great Society of the 1960s. In percentage terms, it is the fourth-largest increase, with about half of that attributed to the potential costs of having to cover Aduhelm at its original price.

In November, the agency noted great uncertainty about how much the drug would weaken Medicare's already-fragile finances if it were to be covered. "Depending on utilization, the potential costs for this course of treatment range from negligible to very significant," the agency wrote in the Federal Register notice about this year's premiums.

If 1 million of the roughly 62 million people on Medicare used Aduhelm, spending by the program on that drug alone would be nearly $57 billion a year, the Kaiser Family Foundation estimated several months ago. That would far exceed all other medicines combined covered through Medicare's Part B, which includes infusion therapies such as Aduhelm and other drugs administered in doctor's offices.

In a two-sentence announcement of his directive, Becerra called the price change "dramatic," and said it "is a compelling basis for CMS [Centers for Medicare and Medicare Services] to reexamine" the monthly premium that began this month.

"It's unprecedented for any administration to adjust premiums up or down while they've been announced," said Tricia Neuman, a senior vice president at the health policy organization Kaiser Family Foundation who has specialized in Medicare for three decades. "I don't know of any example."

Becerra's instruction did not come with any time frame for the Medicare agency to review the premium, and two federal health officials said there are no rules for such a process.

The agency "is reviewing the secretary's statement to determine next steps," said Beth Lynk, a spokeswoman. The agency did not address the question of how long the rethinking might take or how it would work.

Neuman said that in practical terms any change would need to be coordinated with the Social Security Administration, because most people on Medicare have their premiums deducted from their monthly Social Security checks.

Beginning with this month's checks, which start being issued this week, Social Security has a 5.9% cost-of-living increase for 2022, but many people on Medicare may first notice that the relatively large premium increase for their health insurance is cutting into the size of their checks.

If Medicare decides in favor of covering Aduhelm, the program would not include the drug right away. The decision is preliminary and is scheduled to be followed by a final one in April.

Becerra's move came after prominent Democratic senators urged the Biden administration to take immediate steps to cut rising drug costs for seniors. Much bigger curbs on drug prices promised by Democrats are hung up in Congress along with the rest of President Joe Biden's wide-ranging social agenda legislation.

Biden's bill would cap at $2,000 a year the amount Medicare recipients have to pay out-of-pocket for medicines, require drugmakers to pay the government rebates if they raise prices faster than inflation, and authorize Medicare to negotiate prices for certain medications.

In announcing the Aduhelm price cut just days before the Christmas holidays, Biogen acknowledged the high cost had become a stumbling block to uptake for its medication.

"Too many patients are not being offered the choice of Aduhelm due to financial considerations and are thus progressing beyond the point of benefiting from the first treatment to address an underlying pathology of Alzheimer's disease," CEO Michel Vounatsos said at the time. "We recognize that this challenge must be addressed in a way that is perceived to be sustainable for the U.S. healthcare system."

Usually the financial impact of high-cost drugs falls most directly on patients with serious diseases such as cancer, rheumatoid arthritis or multiple sclerosis. But with Aduhelm, the pain would be spread among Medicare recipients generally, not just Alzheimer's patients needing the drug.

That's turned the drug into a case study of how one pricey treatment can swing the needle on government spending and affect household budgets. People who don't have Alzheimer's would still be on the hook for the cost of Aduhelm, since it's big enough to affect their premiums.

Alzheimer's is a progressive neurological disease with no known cure, affecting about 6 million Americans. The vast majority are old enough to qualify for Medicare, which covers more than 60 million people, including those 65 and older and disabled people under 65.

Aduhelm is the first Alzheimer's medication in nearly 20 years. It doesn't cure the life-sapping condition, but the FDA determined that its ability to reduce clumps of plaque in the brain is likely to slow dementia in its earlier stages. However, many experts say that benefit has not been clearly demonstrated.

Information for this article was contributed by Amy Goldstein of The Washington Post and Ricardo Alonso-Zaldivar of The Associated Press.