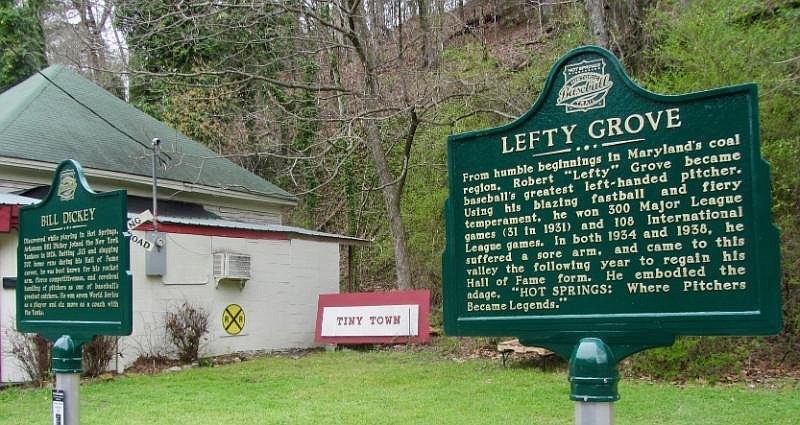 HOT SPRINGS — Now that the venerable Oaklawn track has morphed into Oaklawn Racing Casino Resort, it's possible to spend an entire day on the multi-purpose premises.

In the process, you can also spend a lot of money. You can bet on the horses here and at other U.S. tracks. Without leaving the complex, you can play the slots as well as blackjack, craps, poker, roulette and can bet on live sports. You can even bed down at the 198-room Oaklawn Resort Hotel, where January rates for a deluxe room with track view run from $175 to $390 per night.

As Oaklawn's longer 2021-2022 Thoroughbred season continues through May 7, it's also possible via bad luck or bad gambling (or both) to find that you've lost all the money budgeted for the day — and perhaps a wad more.

If your day's betting budget has evaporated, one head-clearing option is a walk or drive north along Central Avenue to sample some of Hot Springs' varied attractions that are free or cost just a piffle.

A popular starting spot is Bathhouse Row, a procession of eight restored buildings two miles or so north of Oaklawn along Central Avenue. The bathhouses, some of them ornate, evoke the Spa City's golden age as a health resort in the 20th century's first half. 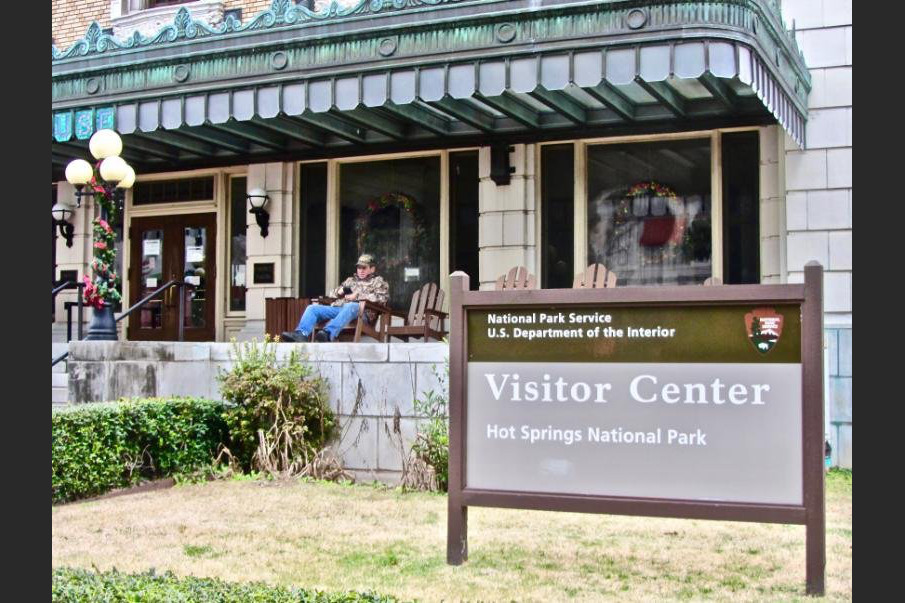 Fordyce Bathhouse houses the visitor center of Hot Springs National Park. (Special to the Democrat-Gazette/Marcia Schnedler)
Fordyce Bathhouse serves as the visitor center for Hot Springs National Park, which celebrated its centennial in 2021. The Fordyce's 23 restored exhibit rooms give a feel for the upper-class comforts as well as the spa regimens, some of them quite rigorous. Admission is free.

Other bathhouses operate in various guises. Buckstaff and Quapaw still function as bathhouses, with lobbies that can be visited free of charge along with spa treatments at various prices. Superior houses the nation's only craft brewery on National Park Service property. Hale is a stylish boutique hotel. Lamar serves at the park's gift shop. Ozark is the occasional venue for art exhibits. Only Maurice is vacant.

At the south end of Bathhouse Row, spigots offer visitors the chance to take home as much free Hot Springs mineral water as they wish — as long as they bring their own bottles or jugs.

Small samples of Ouachita Mountains water are free at Mountain Valley Spring Company Visitor Center and Museum, at 150 Central Ave. Larger amounts of the elixir, which has been tapped and sold since 1871, are for sale. The museum, mostly on the second floor, pictures U.S. presidents and other famous folks with Mountain Valley bottles close at hand. Elvis Presley is shown as a devoted enthusiast.

Free tasting with more of a punch can be enjoyed at the Winery of Hot Springs retail outlet, 1503 Central Ave. Along with the gratis sips of wine, none of it made on the premises, visitors can also view a wine-history exhibit from Cowie in Logan County. 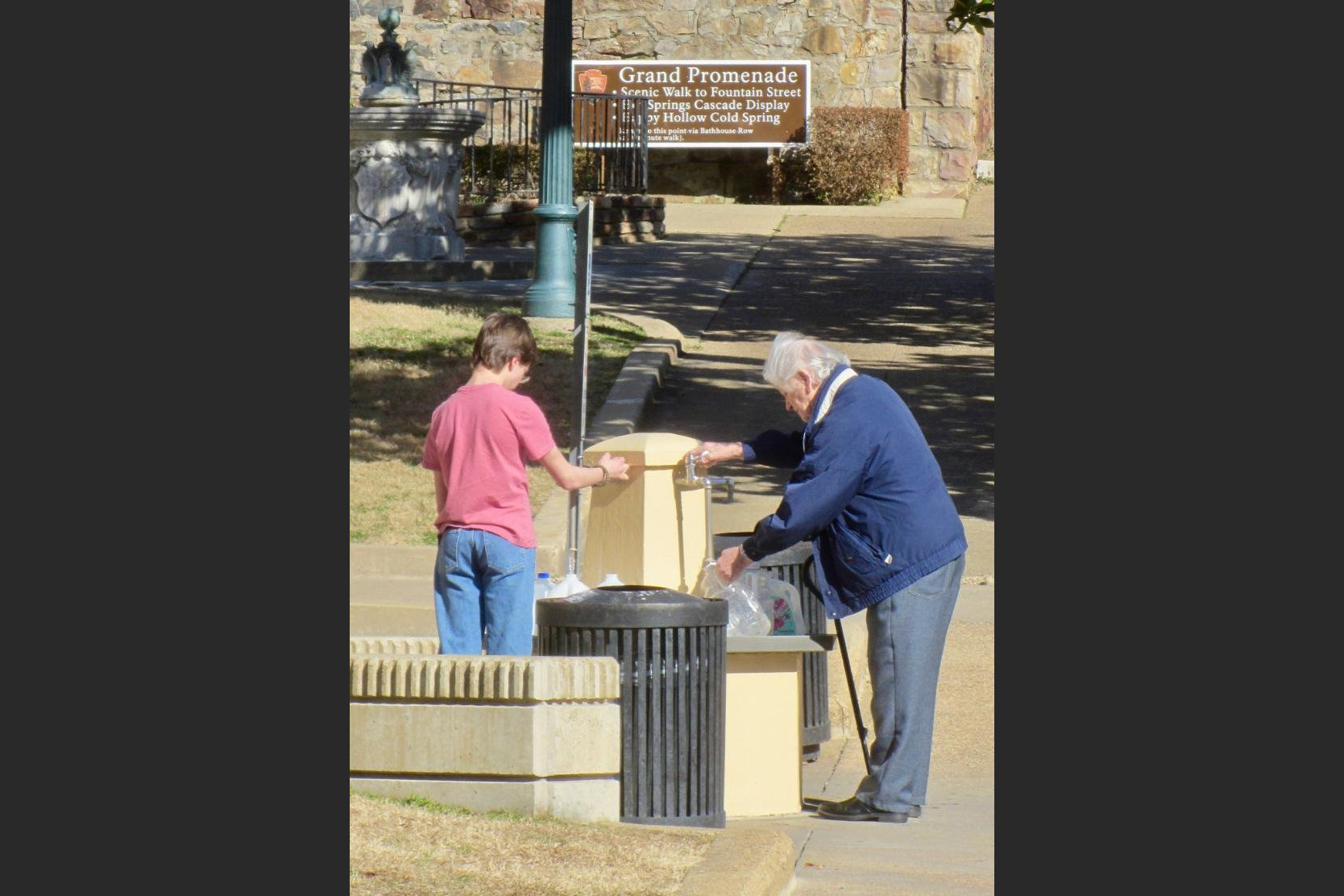 Water piped from underground is free at Hot Springs National Park. (Special to the Democrat-Gazette/Marcia Schnedler)
There's a nostalgia fix for fans of the sport that once reigned as Our National Pastime. You can follow the Historic Baseball Trail, playing on the fact that Hot Springs hosted major-league spring training from 1886 through the 1920s. Twenty-eight plaques are scattered around the city. They celebrate Dizzy and Daffy Dean, Babe Ruth, Honus Wagner, Cy Young and other bygone stars.

Off Central Avenue and a few blocks south of Bathhouse Row, baseball is the theme for a sweeping mural that also salutes the racial desegregation of the sport after World War II. Pictured are white stars Wagner, Ruth and Lefty Grove, along with Black big-league pioneers Jackie Robinson and Satchel Paige.

On walls of buildings across from Bathhouse Row, a dazzling mural depicts two Quapaw warriors, while another features a pair of American Indian women plus floral displays. Both paintings are by Pepe Gaka, creator of several others among the dozen or so Spa City murals.

The Bill Clinton Boyhood Home at 1011 Park Ave. is only a drive-by freebie. That's because the house where the future 42nd president lived from ages 8 to 15 is a private residence. It's one of the city's 15 Clinton-related stops mapped in a visitor-center pamphlet. Some of them are tangential, but all are free for the looking.

For information on Hot Springs attractions, visit hotsprings.org or stop by to pick up assorted brochures at the city's visitor center, 629 Central Ave. For information on Oaklawn Racing Casino Resort, visit oaklawn.com.