Have no fear, bedrock is here: Mountain biker looks bedrock phobia in the eye 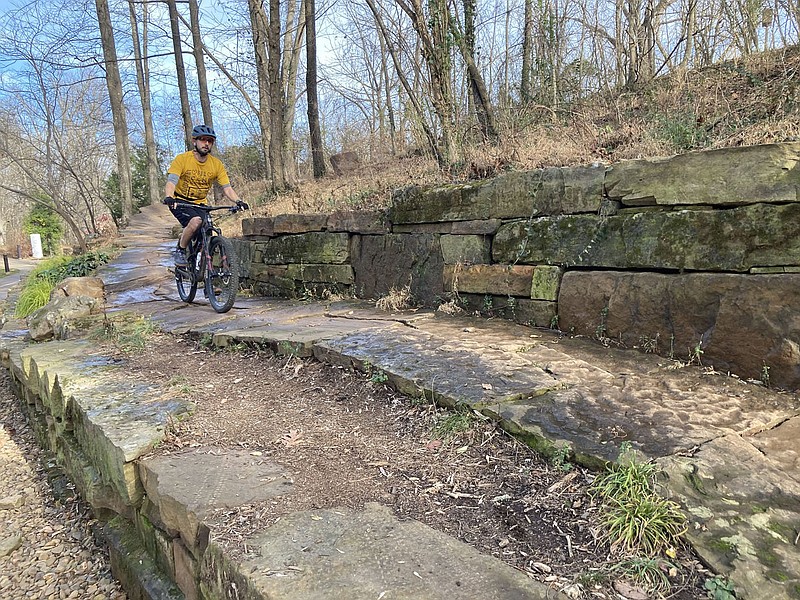 A rider maneuvers Christmas eve over a rocky portion of the All American Trail near Crystal Bridges Museum of American Art in Bentonville. (NWA Democrat-Gazette/Flip Putthoff)

So many trails and so little time. With miles of trail for hiking or mountain biking being added almost daily, it's hard to sample them all.

One trail I've walked past a dozen times is the All American Trail at Crystal Bridges Museum of American Art in Bentonville. On visits to the museum I've watched mountain bikers ride with joy over the dirt trail's ups and downs and zip around tight turns.

So on a 70-degree Christmas Eve afternoon, the mission was to see the temporary exhibit "In American Waters: The Sea in American Painting" at Crystal Bridges, then take a spin on the mountain bike along the All American Trail.

To me, the best way to visit the museum is to park in downtown Bentonville, then walk north along the Razorback Greenway for about three-quarters of a mile downhill to the south entrance of the museum. It's a pretty walk with a stream, pond and sculptures to see along the way.

I'd planned to spend an hour viewing the exhibit. Two hours later I left totally impressed. It's a wonderful exhibit that will be at Crystal Bridges through Jan. 31.

Walking back to the car, riders were pedaling along the All American Trail and I was eager to hop on the mountain bike and join them. There was one little problem: my fear of riding over bedrock. There's lots of it where the trail starts downtown, across the street from the Lawrence Plaza ice rink. I stopped to watch the riders, kids included, pedaling over these rocky stretches without a care.

It's not really bedrock, but flat rocks set side by side to create a bedrock-like surface. I admired their skill, but figured I'd just walk the bike over the rock.

This phobia includes a vision of my bike tires slipping on the rock and me taking a tumble with bloody results. When you're old enough to be carrying around an AARP card, the fewer cuts and bruises the better. Not only that, but on this warm humid Christmas Eve, the rock was wet in spots.

I sat in the car with a debate going in my noggin. Do I really want to do this? Right brain said, "No way. Better safe than sorry." Left brain said, "Get your rear on that bike. It'll be fun."

Left brain won and minutes later I was coasting along smooth dirt at the start of the All American Trail. Left brain was right. I was having a ball. Oh no, here comes the bedrock. Evidently left brain had taken command. I didn't walk, by golly, I stayed on the bike and bumped along, riding over the rock and smiling all the way. Even the wet turns didn't faze me. I hit the next rocky stretch, giddy with my new confidence. I'd confronted my phobia and now it was gone.

All American Trail runs beside the Razorback Greenway and there are lots of spots to exit the dirt trail and ride the greenway back to the start and do it all over again. Or, keep heading north past the museum and downhill to more off-road pathways.

Crystal Bridges is one place where you can view a world-class art exhibit one minute and enjoy a great hike or bike ride the next. Now, thanks to my last visit, when I come to bedrock I'll roll and not walk. 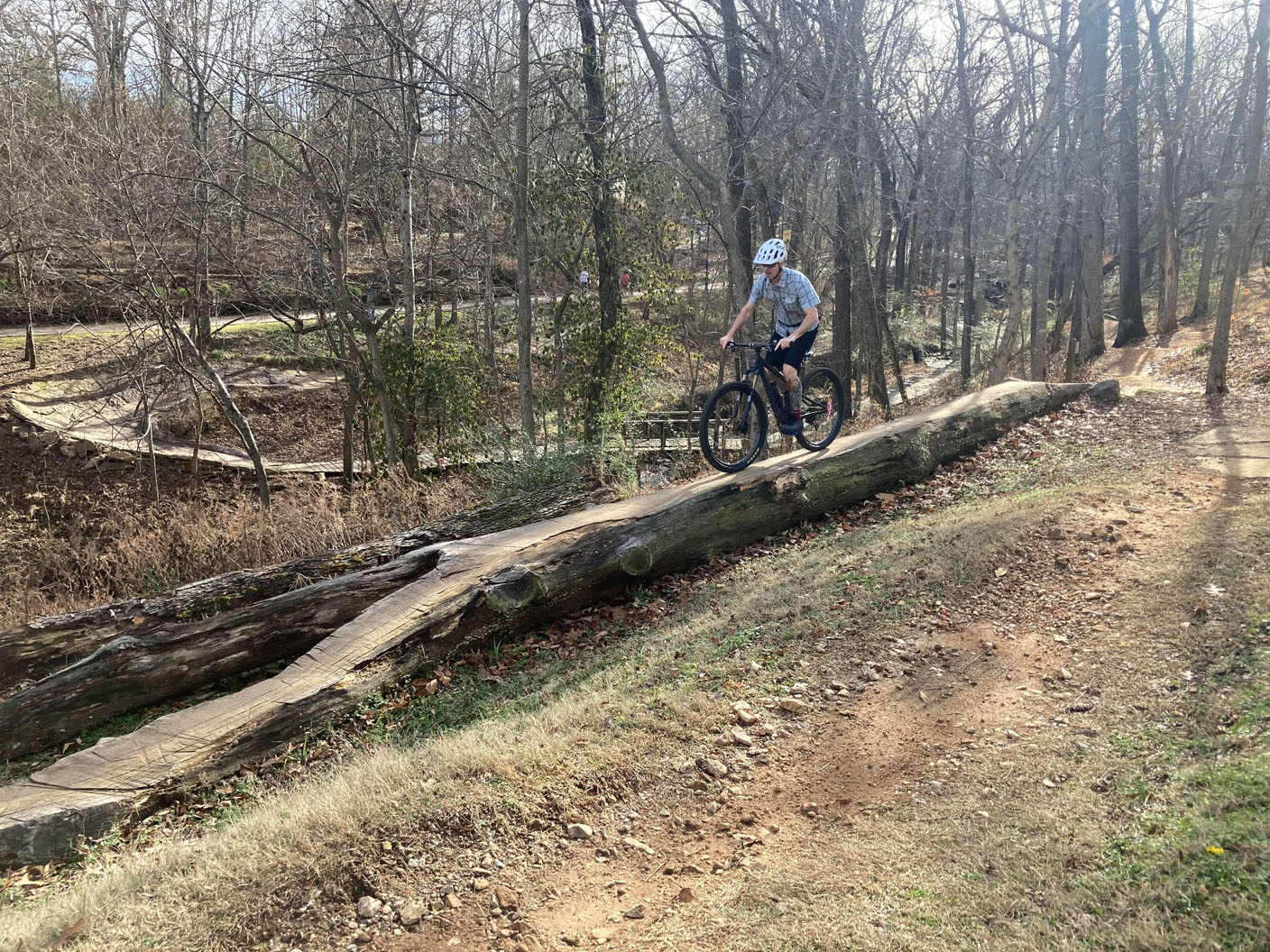 To ride or not to ride over challenging features, that is the question. Riders can tackle theseor go around them. (NWA Democrat-Gazette/Flip Putthoff)