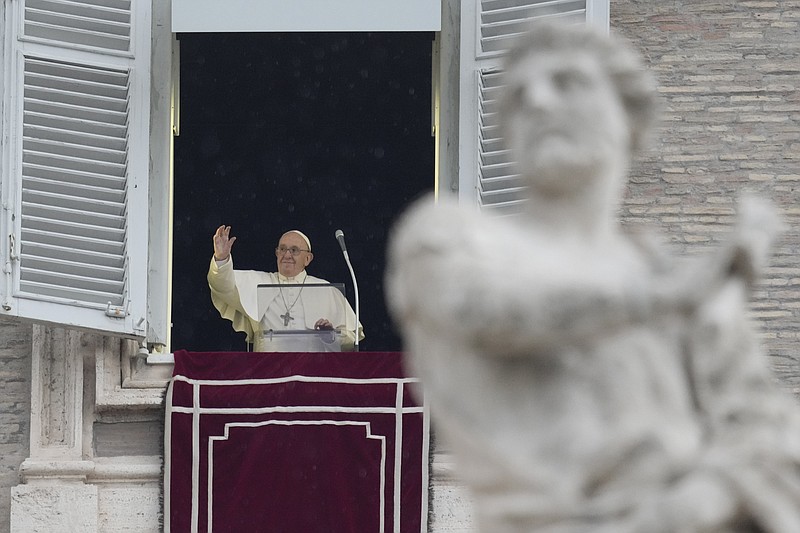 ROME -- Pope Francis suggested Monday that getting vaccinated against the coronavirus was a "moral obligation" and denounced how people had been swayed by "baseless information" to refuse one of the most effective measures to save lives during the pandemic.

Francis used some of his strongest words yet in calling for people to get vaccinated in a speech to ambassadors accredited to the Holy See, an annual event in which he sets out the Vatican's foreign policy goals for the year.

[Video not showing up above? Click here to watch » arkansasonline.com/111pope/]

Francis, 85, has generally shied away from speaking about vaccination as a "moral obligation," though his covid-19 advisers have referred to it as a "moral responsibility." Rather, Francis has termed vaccination as "an act of love" and has said refusing to get inoculated was "suicidal."

On Monday, he went a step further, saying individuals had a responsibility to care for themselves, "and this translates into respect for the health of those around us. Health care is a moral obligation," he said.

The pope lamented that, increasingly, ideological divides were discouraging people from getting vaccinated.

"Frequently, people let themselves be influenced by the ideology of the moment, often bolstered by baseless information or poorly documented facts," he said, calling for the adoption of a "reality therapy" to correct this distortion.

"Vaccines are not a magical means of healing. Yet, surely they represent, in addition to other treatments that need to be developed, the most reasonable solution for the prevention of the disease," he said.

Some Catholics, including some conservative U.S. bishops and cardinals, have claimed that vaccines based on research that used cells derived from aborted fetuses were immoral, and have refused to get shots.

The Vatican's doctrine office, however, has said it is "morally acceptable" for Catholics to receive the covid-19 vaccines. Francis and Emeritus Pope Benedict XVI have been fully vaccinated with Pfizer-BioNTech shots.

Francis repeated his call for universal access to the shots, particularly in the parts of the world with low vaccination rates, and called for revisions to patent rules so poorer countries can develop their own vaccines.

"It is appropriate that institutions such as the World Trade Organization and the World Intellectual Property Organization adapt their legal instruments lest monopolistic rules constitute further obstacles to production and to an organized and consistent access to health care on a global level," he said.

Francis delivered the speech to a much smaller group of diplomats than usual and he skipped the part of the audience that ambassadors relish: a chance to greet him personally and exchange a few words. The restrictions were clearly a response to the exponential rise in coronavirus cases in Italy.

On other topics, Francis lamented Syria's devastation, calling for "political and constitutional reforms" so the country can be "reborn," and urged that any sanctions avoid targeting civilians.

He didn't single Russia out by name but called for "acceptable and lasting solutions" for Ukraine and the southern Caucasus inspired by "reciprocal trust and readiness to engage in calm discussion." He also urged more open communications to avoid culture wars, without mentioning gender ideology or other hot-button topics by name.

"[Some attitudes] leave no room for freedom of expression and are now taking the form of the 'cancel culture' invading many circles and public institutions. Under the guise of defending diversity, it ends up cancelling all sense of identity with the risk of silencing positions," he warned.