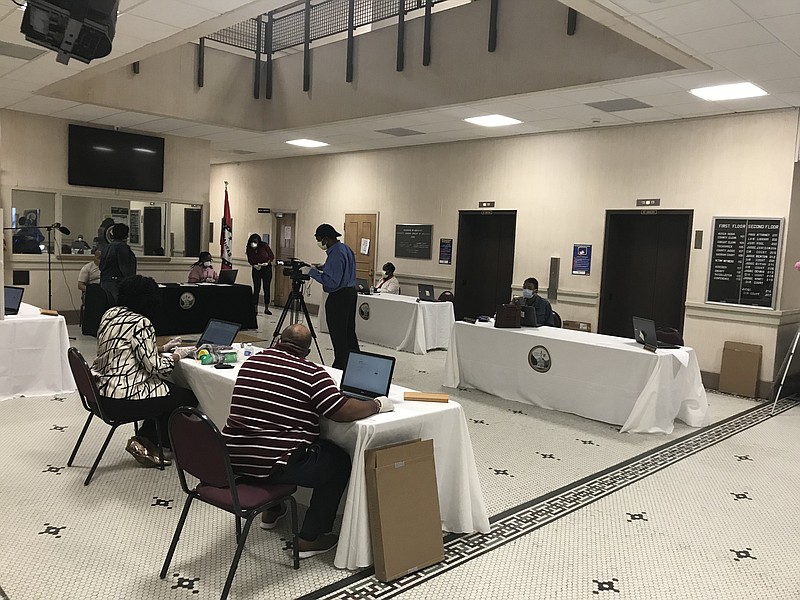 FILE - Members of the Jefferson County Quorum Court and staff maintain a safe social distance of at least six feet between other people during a meeting in April 2020 in Pine Bluff.

The Jefferson County Quorum Court passed a noise ordinance during Monday's meeting to prohibit unreasonably loud noises and disturbance of the peace. A similar ordinance remains in effect for the city of Pine Bluff, but outside of the city limits no ordinance exists, according to Jefferson County Sheriff Lafayette Woods Jr.

Woods said he frequently receives complaints originating from a commercial business that is being leased to a club situated off the highway near several residential homes.

"Unfortunately, our officers have responded to this particular business, but there's not a lot they can do when they respond," said Woods.

The ordinance passed by the Quorum Court will prohibit the playing of any radio, stereo, music reproduction system or musical instruments of such volume particularly between the hours of 10 p.m. and 6 a.m.

Any violation of the ordinance will result in a fine of up to $500 and double for each repeated violation.

The city of Pine Bluff noise ordinance "prohibits the loud playing of radios, phonographs, televisions, tape decks, amplifiers, loudspeakers, musical instruments, vehicle alarm systems or other devices not enumerated here but which cause loud or irritating noises which are plainly audible from a distance of 50 feet from its source or in such manner as to annoy or disturb the quiet comfort or repose of persons in any office, hospital or in any dwelling, hotel, or other type of residence, or of any persons in the vicinity, particularly between the hours of 10:00 p.m. and 7:00 a.m."

Also "yelling, shouting, hooting, whistling, or singing on the public streets, particularly between the hours of 11:00 p.m. and 7:00 a.m. or at any time or place so as to annoy or disturb the quiet, comfort or repose of any person in any hospital, dwelling, hotel or any other type of residence, or of any person in the vicinity" is also prohibited within city limits.

"The reasonable use of amplifiers or loudspeakers in the course of public addresses which are noncommercial in character, noises generated by public or private school athletic contests, band practices or performances, or other school activities or functions are permitted," according to the Pine Bluff City ordinance, so long as said events are conducted between the hours of 7:30 a.m. and 11 p.m.

The first one would appropriate $673,906 from the American Rescue Plan for the 2022 budget year.

The second one would appropriate a total of about $2.2 million in various grants.

Robinson said these funds were not spent in 2021 and were being carried over into the 2022 fiscal budget.

During the treasurer's report, Vonysha Goodwin, county treasurer, reported over a $20 million fund balance to end 2021, with over $3 million in revenue for the month of December.

Robinson said he wants to carry over some of the balance and create additional reserve accounts totaling $4 million, a move that he plans to propose at the next Quorum Court Committee meeting.