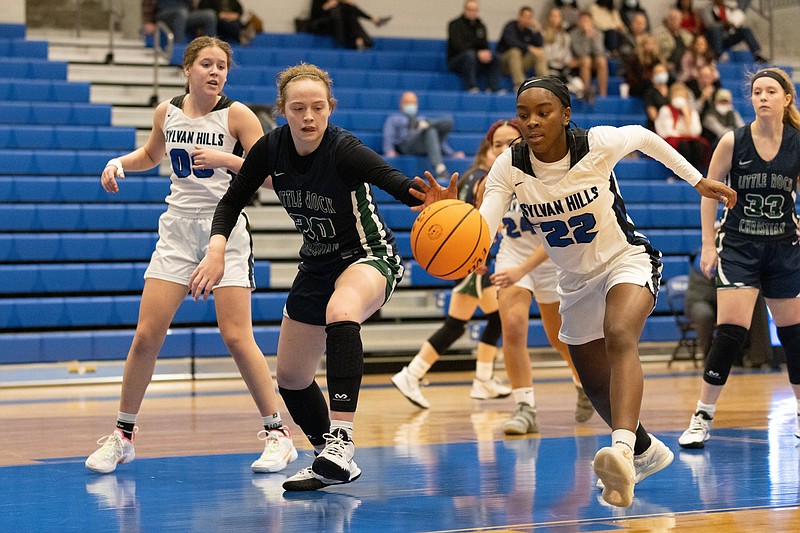 Little Rock Christian didn't shoot the ball as well as Coach Ronald Rogers would've liked Tuesday night, but the Lady Warriors made the shots they needed to escape with a key road victory.

The basket was the fourth three-pointer of the game for Denton, who provided the Lady Warriors with crucial perimeter shooting to help stave off a hard-charging effort from the Lady Bears. It was also the junior guard's confidence that drew admiration from her coach afterwards.

"One thing we do is tell our shooters to shoot," Rogers said. "We've got multiple people that can shoot the ball, and at any point, they might miss two or three. But at the same time, they've got the ability to make three or four. Kate's got that mentality, and she was going to put that shot up.

"And she didn't hesitate at all. That's what I like about it, and I'm happy for her."

Denton had missed a three-pointer moments before but got a chance at redemption when Little Rock Christian (11-2, 1-0 5A-Central) grabbed the offensive rebound. The ball eventually landed back in her hands, and she delivered with her biggest bucket of the game.

Sylvan Hills (8-4, 0-1), which led the entire fourth quarter until Denton's field goal, had an opportunity to win it when Jianna Morris was fouled on a three-point attempt with no time left on the following trip. But she missed all three free throws, allowing the Lady Warriors to walk away with a win.

Denton and Ashton Elley both had 12 points for Little Rock Christian, which won its sixth game in a row. Elley also had 17 rebounds and two blocks. Mia Smith added 8 points, 5 assists and 3 steals.

Morris, who went over the 1,000-point mark for her career, finished with 19 points, 7 rebounds and 3 steals for the Lady Bears, who made just 2 of 9 (22.2%) in the final quarter and 18 of 51 (35.2%) overall. Karsyn Morgan ended with 16 points, including four three-pointers, and Jayla Stirgus had eight points. Courtney Savell also contributed 12 rebounds.

Little Rock Christian, which shot 19 of 57 (33.3%), missed nine of its first 10 shots and was in a 7-3 hole by the midway point of the first quarter. But Denton started hitting from the outside, and that seemingly got the Lady Warriors on track.

She hit back-to-back three-pointers and assisted on another -- a 22-footer from Gwinn Hall -- to draw Little Rock Christian even at 14-14 by quarter's end. A short jumper from Faith Atchinson at the start of the second began a quick 6-0 run that allowed the Lady Warriors to surge ahead.

Little Rock Christian held a lead as big as 26-19 later in the second quarter, but Morgan and Morris kept the spread close. The two scored 10 of Sylvan Hills' 12 points in the quarter, with Morris' long jumper with two seconds left before the half to cap a 7-2 spurt and cut the Lady Warriors' advantage to 28-26.

"Defensively, we've got to be better," Rogers said. "Sylvan Hills really hurt us on their penetration, and it showed. We've got to do a better job of moving our feet. We held them to those points, but I think we can be much better than what we were."

Morris and Morgan continued their scoring ways in the third, teaming to notch 13 of Sylvan Hill's 15 points. Morgan drilled consecutive threes during a rally that gave the Lady Bears a 34-31 lead -- their first since late in the first quarter.

Yet, Sylvan Hills went cold in the fourth, which enabled the Lady Warriors to hang around long enough for Denton to bury her eventual game-winner.

"This was a really good win for us," Rogers said. "We were missing a very big piece of our puzzle in Ashley Hopper, who's our double-double machine. But what I like about this group is that people step up. [Tuesday], we had to have some others step up, and they did to help us get a really good win against a really good team."

T.J. Jasper had 13 points for the Bears, who led 28-26 at the half but were behind 39-38 by the end of the third quarter. Little Rock Christian (9-3, 0-1) was still ahead 49-48 with less than three minutes remaining before a floater from Jasper began a 7-0 run that put Sylvan Hills in command.

The Warriors trailed 59-56 with six seconds to go but turned the ball over on the following inbound pass. Womack then hit one of two free throws to seal it.