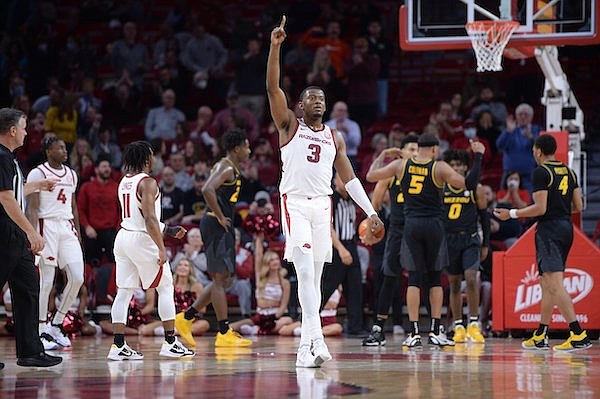 Arkansas forward Trey Wade (3) celebrates Wednesday, Jan. 12, 2022, after guard JD Notae scored and was fouled during the first half of play against Missouri in Bud Walton Arena in Fayetteville.

Behind 19 points from the league's leading scorer in JD Notae and 17 points from Trey Wade, the Razorbacks hammered Missouri 87-43 at Bud Walton Arena to snap a three-game losing streak and string of five losses in six games.

The 44-point margin of victory was Arkansas' second largest in an SEC game, behind a 115-58 win over Mississippi State at in 1993.

Notae scored 14 of his 19 points in the first half and helped Arkansas build an insurmountable lead by halftime. Behind his and Wade's efforts, the Razorbacks led 26-3 just over 10 minutes into the game.

Wade, making his third start of the season in the game, hit 7 of 10 shots in reaching a season high in scoring. He also added 5 rebounds, 3 assists, 2 blocks and 3 steals.

The Razorbacks outscored Missouri by 35 points in his 32 minutes in the lineup.

Davonte Davis had a solid all-around game, turning in 15 points, 6 rebounds, 4 assists and 3 steals. He scored nine points in the second half in 17 minutes.

More from WholeHogSports: Full coverage from Arkansas' win over Mizzou

Sophomore forward Jaylin Williams added a 13-point, 10-rebound double-double. He pitched in 3 assists and 2 steals as well. Chris Lykes scored eight points off the bench and had two assists.

Missouri was led by 12 points from Javon Pickett.

The Tigers, who beat Alabama at home last Saturday, shot 29.2% in the loss. They finished 2 of 16 beyond the arc and committed 23 turnovers, which the Razorbacks turned into 26 points.

Jarron Coleman was the only other Tigers player in double figures with 11.

Arkansas returns to SEC play Saturday when it travels to LSU, which won at Florida on Wednesday.

The Razorbacks' top guys tonight have exited the game and Eric Musselman has turned things over to KK Robinson, Jaxson Robinson and Connor Vanover.

Vanover knocked down a turnaround flip shot from the right short corner shortly after entering. The arena erupted.

It was his first bucket since Dec. 7 against Charlotte.

Davonte Davis added several layups in a short span earlier and climbed up to 13 points to go with 6 rebounds, 4 assists and 3 steals.

JD Notae and Trey Wade have checked out with 19 and 17 points, respectively.

The Razorbacks have, overall, been terrific defensively tonight. The Tigers, though, have been picking on Davonte Davis of late.

Missouri players are 3 of 4 shooting against Davis. Including tonight, SEC opponents are 13 of 16 from the floor when Davis is the nearest Arkansas defender.

He is having a solid night otherwise. Davis has 8 points, 6 rebounds, 4 assists and 3 steals.

Jaylin Williams has his double-double with 13 points and 10 rebounds.

Davis will be at the line when play resumes.

The Tigers have made 6 of their last 9 shots, raising their shooting percentage for the game to 25.7%. Javon Pickett has 10 points on 3 of 8 shooting.

JD Notae has 19 points tonight and Trey Wade is up to 16 on 7 of 10 shooting. Wade, who will be at the line when play resumes, just hit a tough long two-point jumper from the left corner.

It's his world, and we're living in it tonight.

Jaylin Williams is one rebound away from a double-double (11 points, 9 rebounds).

Not a whole lot has changed from the first half. Things are still bouncing the Razorbacks' way at just about every turn.

JD Notae has five points since the break, giving him a game-high 19 points. Jaylin Williams has added 4 points, 2 rebounds and 1 assist, too.

He has been everywhere. He stole a Missouri sideline out of bounds play and slammed one home on the other end moments ago.

Williams has 11 points tonight. He's scored in double figures in back-to-back games for the first time this season.

The best half of the season for the Razorbacks has them ahead 34 points at the break and well on their way to win No. 1 in SEC play.

Wade was terrific as well. He finished the half with 12 points, 2 blocks and 2 steals.

Defensively, Wade held Tigers players to 0 of 5 from the floor, including 0 of 4 inside the arc. Arkansas is plus-29 in his 16 minutes.

Kamani Johnson, who has 4 points and 4 rebounds in 9 minutes, left the game earlier with an ankle injury but appears to be OK. Wade also left with calf cramps.

He was being assisted by a pair of Arkansas support staffers near the team bench prior to the break.

Missouri finished the half 3 of 25 shooting and 1 of 11 from deep. The Tigers committed 11 turnovers.

Javon Pickett and Kobe Brown lead the way with four points each. Brown made 2 of Missouri's 3 shots in the half on 6 attempts.

Neither team is shooting the ball well right now. That's been the issue for the Tigers all night, though.

Both sides are 1 of their last 7 from the floor.

JD Notae is up to 12 points, and Trey Wade has 9 points, 2 blocks and 2 steals so far. This has been his best game of the season by far.

Missouri is also 0 of 4 shooting with Wade as the nearest Arkansas defender.

The Tigers are 3 of 21 shooting and 1 of 9 from deep. They have committed nine turnovers, too, and the Razorbacks have added 14 points off of those miscues.

Hard to explain what we've seen from the Razorbacks on both ends to this point. They are more energized offensively and defensively than the Tigers by a wide, wide margin.

Each Arkansas player who has touched the floor so far has contributed positively in some way. Multiple-effort plays have been there from essentially every Razorback.

Missouri is 2 of 16 shooting and has turned the ball over nine times. Arkansas is 15 of 23 from the floor and has nine assists against two turnovers.

This has truly been a dizzying start from Arkansas.

The Tigers cannot gain any traction offensively and the Razorbacks are playing with a ton of confidence early.

Trey Wade has matched a season high with seven points with better than 11 minutes left in the half. He also blocked a shot on back-to-back defensive possessions.

Missouri is 1 of 11 shooting so far, and Arkansas is 10 of 14. Razorbacks playing with great energy on the defensive end.

The score is not a typo. The Razorbacks utterly dominated the opening minutes of this game.

The starting lineup that had not played together a single possession all season has it all working so far.

JD Notae leads with 9 points on 3 of 4 shooting and 2 assists, Trey Wade has 5 points and 1 steal, and Jaylin Williams and Kamani Johnson each have 2 points. Johnson also has three rebounds and Williams 2 assists.

Wade knocked down a three-pointer assisted by Williams and also tip-slammed a missed midrange jumper by Notae.

Arkansas got out to a 7-0 lead in the first 1:36 of the game and forced Cuonzo Martin to call a timeout. What a run by that starting five.

The Razorbacks, who are 14-point favorites tonight, are looking to avoid their first 0-4 start in SEC play since 2009.

Notae is averaging 23.5 points in two conference games on 42.5% shooting and 6 of 15 (40%) from three-point range. He also leads the Razorbacks with seven steals.

In three games against Missouri during the 2020-21 season, Notae scored 16 points per game, including 27 in Arkansas' win at the SEC Tournament.

Johnson is making his first start as a Razorback. He finished with 7 points, 8 rebounds, 1 block and 1 steal at Texas A&M.

This will be Wade's third start of the season. He also started against Elon and Mississippi State. Wade has played nine minutes the last two games.

Brown, who finished with a 30-point, 13-rebound double-double in the Tigers' win over Alabama on Saturday, earned SEC player of the week honors on Monday. He hit 7 of 10 shots inside the arc and made 10 of 11 attempts at the foul line.

He averages a team-best 6.4 fouls drawn per 40 minutes played in league games.

According to Hoop Lens analytics, Missouri has scored 1.11 PPP with Brown on the floor in conference play and posted a turnover rate of 13.9%. When he sits, the Tigers’ PPP figure dips to 0.75 and the turnover percentage climbs to 20.8%.

Missouri ranks 352nd nationally in three-point percentage (25.1%) and 332nd in three-point defense (38.1%), per KenPom. Missouri tied a season high with nine made threes in the win over the Crimson Tide.