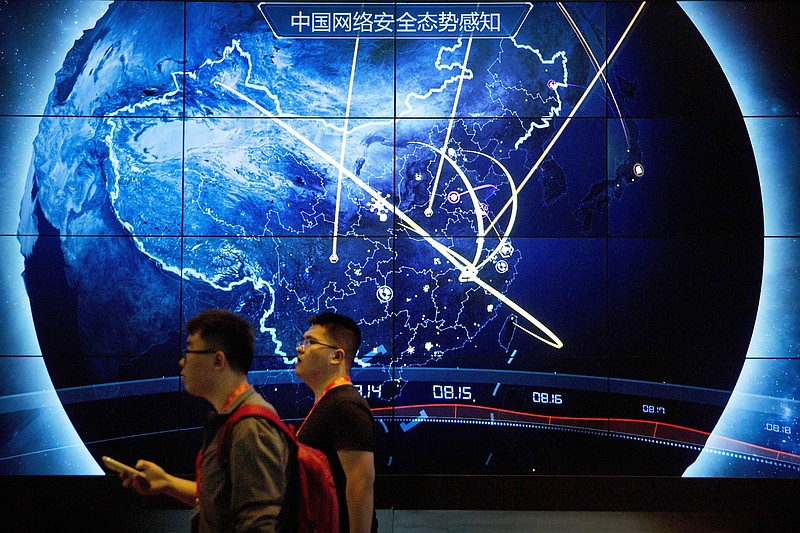 FILE - In this Sept. 12, 2017, file photo, attendees walk past an electronic display showing recent cyberattacks in China at the China Internet Security Conference in Beijing. Cybersecurity and space are emerging risks to the global economy, adding to existing challenges posed by climate change and the coronavirus pandemic, the World Economic Forum said in a report Tuesday, Jan. 11, 2022. (AP Photo/Mark Schiefelbein, File)

LONDON -- Cyberthreats and the growing space race are emerging risks to the global economy, adding to existing challenges posed by climate change and the coronavirus pandemic, the World Economic Forum said in a report Tuesday.

The Global Risks Report is usually released ahead of the annual elite winter gathering of chief executives and world leaders in the Swiss ski resort of Davos, but the event has been postponed for a second year in a row because of covid-19. The World Economic Forum still plans some virtual sessions next week.

As 2022 begins, the pandemic and its economic and societal impact still pose a "critical threat" to the world, said the report, which is based on a survey of about 1,000 experts and leaders.

Big differences between rich and poor nations' access to vaccines mean their economies are recovering at uneven rates, which could widen social divisions and heighten geopolitical tensions.

The pandemic forced a huge shift -- requiring many people to work or attend class from home and giving rise to an exploding number of online platforms and devices to aid a transformation that has dramatically increased security risks, the report said.

"We're at the point now where cyberthreats are growing faster than our ability to effectively prevent and manage them," said Carolina Klint, a risk management leader at Marsh, whose parent company Marsh McLennan co-wrote the report with Zurich Insurance Group and SK Group.

Cyberattacks are becoming more aggressive and widespread, as criminals use tougher tactics to go after more vulnerable targets, the report said. Malware and ransomware attacks have boomed, while the rise of cryptocurrencies makes it easy for online criminals to hide payments they have collected.

While those responding to the survey cited cybersecurity threats as a short- and medium-term risk, Klint said the report's authors were concerned that the issue wasn't ranked higher, suggesting it's a "blind spot" for companies and governments.

Space has become a new area for concern.

Meanwhile, a host of countries are beefing up their space programs as they chase geopolitical and military power or scientific and commercial gains, the report said.

But all these programs raise the risk of frictions in orbit.

"Increased exploitation of these orbits carries the risk of congestion, an increase in debris and the possibility of collisions in a realm with few governance structures to mitigate new threats," the report said.

Space exploitation is one of the areas that respondents thought had the least amount of international collaboration to deal with the challenges.

Experts and leaders responding to the survey "don't believe that much is being done in the best possible way moving forward," the World Economic Forum's managing director, Saadia Zahidi, said at a virtual press briefing from Geneva.

Other such areas include artificial intelligence, cyberattacks and migration and refugees, she said.

The environment remains the biggest long-term worry, the report said.

The planet's health over the next decade is the dominant concern, according to survey respondents, who cited failure to act on climate change, extreme weather, and loss of biodiversity as the top three risks.

The report noted that different countries are taking different approaches, with some moving faster to adopt a zero-carbon model than others. Both approaches come with downsides. While moving slowly could radicalize more people who think the government isn't acting urgently, a faster shift away from carbon intense industries could spark economic turmoil and throw millions out of work.

"Adopting hasty environmental policies could also have unintended consequences for nature," the report added. "There are still many unknown risks from deploying untested biotechnical and geoengineering technologies."