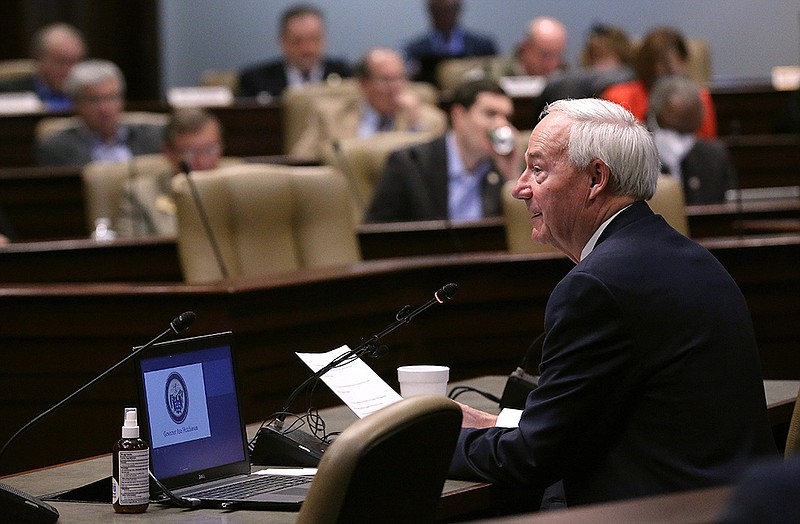 Arkansas Gov. Asa Hutchinson on Tuesday proposed a $194.6 million increase in the state's general revenue budget to $6.04 billion in the fiscal year starting July 1, with most of the increase for public schools and human services programs.

The Republican governor said his proposed fiscal 2023 budget would fund initiatives to reduce the waiting list for the developmentally disabled to receive services, make the entry-level salaries of state troopers more competitive in the South, and provide sufficient state funding for the state's health insurance plan for current and retired public school employees.

His successor as governor will take office in January 2023 -- about midway through fiscal 2023.

The governor said his proposal would increase the budget by 3.3% over the current budget, and that's higher than what he would prefer.

But the needs of the state and state government's healthy financial position support the increase, he told state lawmakers during their first day of budget hearings in advance of the fiscal session that starts Feb. 14. The budget hearings are scheduled to be held through Thursday and then from Jan. 18-20.

Hutchinson said the projected surplus would provide "a cushion that is needed in this time of economic fluctuations."

He noted that the state also has $1.2 billion in its catastrophic reserve fund, "which gives us an additional cushion."

Legislative leaders on Tuesday generally said they didn't initially find much to object to in the governor's proposed budget, but they want more details on various proposals.

Senate President Pro Tempore Jimmy Hickey, R-Texarkana, said the governor's proposal is prudent and most of the proposed increases would be supported by most Arkansans.

"I sure didn't hear a lot of grumbling," said state Rep. Lane Jean, R-Magnolia, who is a co-chairman of the Joint Budget Committee.

Senate Democratic leader Keith Ingram of West Memphis said, "The devil is in the details."

During his remarks, Hutchinson said the state also has new funds available this year for investment through the federal American Rescue Plan, signed by President Joe Biden in March, and the federal Infrastructure Investment and Jobs Act, signed by Biden in November.

"When we look at our budget for 2023 and the opportunities for long-term investments, we must include in the planning both our general revenue budget along with our plan for spending the federal dollars," he told lawmakers.

Hutchinson said the state can help employers by increasing the training of the workforce, and invest in infrastructure projects that range from expanding rural broadband to helping fund major irrigation projects in eastern Arkansas to reduce dependence on groundwater and protect flooded timberland.

Hutchinson proposed a $66.3 million increase in the Department of Human Services' general revenue budget, to $1.84 billion.

The proposal also includes $37.6 million to reduce the waiting list for developmentally disabled people to receive services in their homes and communities, the governor said.

On Dec. 14, Hutchinson said he wants to provide services to all of the 3,024 people on the waiting list at that time by June 2025.

Hutchinson said the proposed $11 million budget increase at the Division of Children & Family Services would be used to strengthen the child welfare workforce. He said his proposed budget also includes funding for child abduction response teams at the Criminal Justice Institute and stable funding for the state's Child Advocacy Centers.

"As you can see, children are our priority and the budget reflects Arkansas families," he said.

Hutchinson proposed a $69.6 million increase in the general revenue budget for the public school fund, to $2.32 billion.

"I believe there is sufficient allocation of funds to make sure that the health insurance plan for our public school employees is protected," Hutchinson said.

Afterward, Department of Education spokeswoman Kimberly Mundell said savings from lower-than-expected enrollment in the public schools and higher-than-expected growth in tax collections from the state's 0.875% sales tax for educational adequacy will provide sufficient revenue in the public school fund to devote $57.4 million for the health insurance plan for school employees.

Hutchinson also proposed a $28.5 million increase for the educational facilities partnership program, to $70.3 million. That increase would enable the state to fund the statewide estimated facility needs as recommended by the Advisory Committee on Public School Academic Facilities, Raney said afterward. This was funded through one-time funding in fiscal 2022 through restricted reserve funds, she said.

Hutchinson proposed increasing the general revenue budget by $12.9 million for the state's colleges and universities to $775.6 million.

The proposal includes an increased allocation of $5.3 million for Arkansas Tech University, the University of Arkansas at Fort Smith and Southern Arkansas University to correct their historic underfunding, Hutchinson said.

The governor said his proposal also includes $841,000 for the University of Arkansas at Monticello's Center for Forest Business to support the timber industry in south Arkansas.

Among other things, the governor's proposal would increase the budget by:

• $1 million at the University of Arkansas at Monticello to $17.3 million.

• $1 million at the University of Arkansas at Fort Smith to $21.9 million.

• Hutchinson proposed a $7.4 million increase in the general revenue budget for the Arkansas State Police to $78 million.

The governor said he wants to increase the salaries of entry-level state troopers and also benefit those with seniority.

"The reason this is critical is that our recruitment numbers are down and we are currently low in our region for state police salaries," he said. "This will elevate our starting salaries to second in the region of Southern states and it will set an example for local law enforcement and remind them of their responsibilities to make sure they have competitive salaries and livable salaries for those that are in law enforcement."

The state's budget director, Robert Brech, said the largest raises for state troopers would be at the entry level under this plan, which hasn't been finalized yet.

• Hutchinson proposed a $3.8 million increase in the general revenue budget for the Division of Correction to $378.9 million in fiscal 2023.

• He also proposed a $753,618 increase in the budget for the Division of Community Correction to $97.6 million.

• The governor proposed a $5.8 million increase in the general revenue budget for the Arkansas Economic Development Commission to $21 million in fiscal 2023. Raney said the $5.8 million comes from one-time funds for the Accelerator Programs through the restricted reserve set aside fund. These programs provide economic stimulus to the state, she said.

• The governor proposed placing $16 million in the performance fund.

Jean questioned setting aside more money for that fund, which he said has a fund balance of $73.6 million. Hickey wasn't sure the fund needed the money either.

Brech said the performance fund will be used to help pay for the 27th pay period in fiscal 2023, which happens once every 10 years in state government; provides funds to the state's Employee Benefits Division; and helps state agencies pay for merit raise when they are short of funds.

Assistance for this report was provided by Rachel Herzog of the Arkansas Democrat-Gazette.