Omicron to infect half of European population by March, WHO predicts 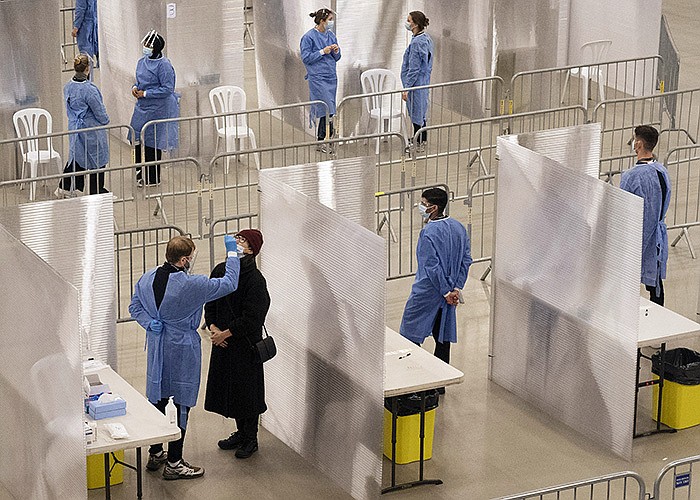 A testing site for the coronavirus in Copenhagen on Dec. 29, 2021. Across Europe, records for new coronavirus infections are falling by the day as the omicron variant tears through populations with a swiftness outpacing anything witnessed over the past two years of the pandemic. (Charlotte de la Fuente/The New York Times)

The omicron variant is expected to have infected more than half the population in the European region in the next six to eight weeks if current trends hold, a World Health Organization official said Tuesday.

In the first week of 2022, Europe registered at least 7 million cases of the coronavirus, more than doubling over a two-week period, WHO regional director Hans Kluge said in an online briefing. Almost all the countries in the WHO's European region -- 53 nations and territories including some in Central Asia -- have confirmed omicron cases.

[Video not showing up above? Click here to watch » arkansasonline.com/112europe/]

"At this rate, the Institute for Health Metrics and Evaluation ... forecasts that more than 50% of the population in the Region will be infected with Omicron in the next 6-8 weeks," he said on Twitter.

The latest data confirms the variant's high transmissibility, said Kluge, "because the mutations it has enable it to adhere to human cells more easily, and it can infect even those who have been previously infected or vaccinated."

This "unprecedented scale of transmission" has led to rising numbers of hospitalizations, Kluge told reporters. "I am also deeply concerned that as the variant moves east, we have yet to see its full impact in countries where levels of vaccination uptake are lower."

Some European countries with high vaccination rates have eased restrictions or reduced isolation periods for the immunized as part of an effort to avoid more disruptions to daily life, while others are tightening curbs on people who have not been vaccinated.

WHO officials including Kluge maintain that existing vaccines provide protection against severe disease and death including in the case of an omicron infection. The global health body said in an update that more research was underway to determine the extent. It also said omicron growth rates have declined or stabilized in many countries but remain "significantly higher" than for the delta variant.

The WHO said initial information on the severity of the variant from some countries including South Africa and Britain suggested that it could carry a reduced risk of hospitalization but that more data was necessary to better understand its impact, especially in parts of the world with low levels of population immunity and vaccination rates.

In the United States and other countries grappling with omicron surges, health care workers are waiting to see whether the wave will mirror those of South Africa and London, where the variant passed its peak while causing relatively fewer deaths and hospitalizations than some models had predicted.

Doctors still worry that because the more contagious omicron will infect more people, even a small fraction of them landing in hospitals could further strain medical systems.

Print Headline: Omicron to infect half of European population by March, WHO predicts