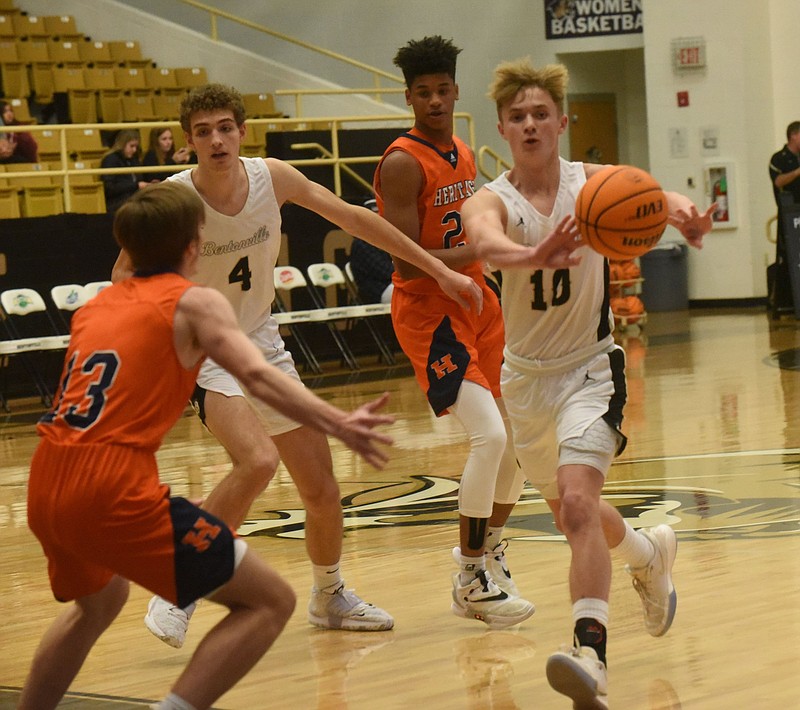 BENTONVILLE -- Dick Rippee just smiled when he looked at the scorebook after Tuesday night's home game against Rogers Heritage.

Bentonville's 76-37 win was significant for several reasons, but what put a grin on the Tiger coach's face more than anything was that nine players scored in the 6A-West Conference win.

"This was a great night for our guys," said Rippee. "We've played a difficult schedule and I feel like this was one of the best games that we've had in a long time this year, and the fact that it comes in our first home game makes it really special."

The win was also a milestone for Rippee, who won his 350th career game.

Bentonville (12-4, 2-1 6A-West) played its first 15 games of the season on the road including back-to-back road games to open conference play last week. On Tuesday the Tigers wasted no time in showing the Tiger Arena crowd what they'd missed, jumping out to a double-digit lead with two minutes left in the first quarter.

Junior guard Jaylen Lee scored all 10 of his points in the first quarter, showing his range with a three-pointer, then his ability to finish at the rim with several drives.

"The key for us tonight was our intensity," said Lee. "I'm not going to lie, in the first couple of conference games we just didn't play with a lot of intensity, like we didn't want to be the best team in the gym. So tonight we wanted to come out with a lot of energy because when we do, it turns out good for the team."

By the time the second quarter reached the halfway point, the Tigers had turned the game into a route. Owen Dehrmann slashed through the lane for a layup with just over two minutes left in the half, giving the Tigers a 26-point advantage at 43-17 and Bentonville carried a 45-21 lead into halftime.

Bentonville opened the second half the same way it started as Hayden Shanks, who scored a team-high 16 points, hit a couple of early buckets to extend the Tigers' lead to 35 points at 56-21. The lead swelled to 75-34 in the fourth quarter.

Dehrmann finished with 11 points for Bentonville and Caden Miller added 10.

Jaden Torres was the only player for Heritage (5-9, 0-3) to reach double-figures, finishing with 11 points. Carson Simmons added 8 points.

Tuesday's game was Bentonville's fourth game in the past week counting a Saturday game in the Hoop Hall South at Bentonville West. Rippee said he was glad to see his team push through the grind and respond with a good two days of preparation.

"We had a great practice yesterday and a great walk-through today ... good spirit, good enthusiasm," said Rippee. "Those are the kind of things we can do when we're into it mentally. Sometimes when you're tired physically, you're not as sharp mentally. So we're trying hard to keep them fresh and tonight we were able to do that."