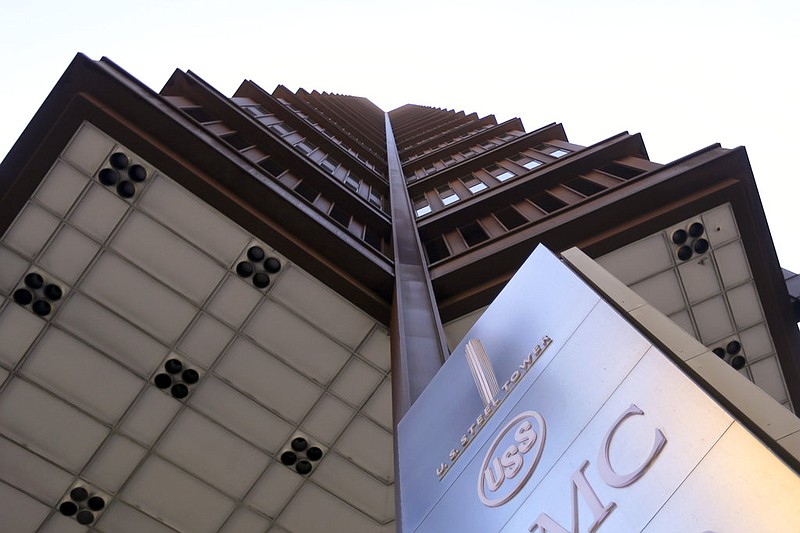 The U.S. Steel Tower, the headquarters of United States Steel Corp., is shown in downtown Pittsburgh in this April 24, 2017, file photo. (AP/Keith Srakocic)

U.S. Steel on Tuesday announced that Osceola will be the site of what it bills as the most advanced steelmaking facility in North America, a $3 billion project that Arkansas economic officials expect will generate 900 direct and indirect jobs.

The northeast Arkansas town of almost 7,000 was one of the locations in three states the Pittsburgh-based steelmaker was considering for the new so-called mini mill, which will feature two electric arc furnaces that will have the capability of producing 3 million tons of steel a year. They are far cleaner than traditional integrated plants fed by coal.

The plant also will have a state-of-the-art "endless casting and rolling line, and advanced finishing capabilities," the company said in a news release issued Tuesday afternoon through the Arkansas Economic Development Commission.

"This first use of endless casting and rolling technology in the United States brings significant energy, efficiency, and capability enhancements to the company's operations," the company said.

The site selection is subject to a number of factors, including final agreements with key partners. Permitting for the project has begun. U.S. Steel said it expects to break ground in the first quarter of 2022, with project completion and full operation scheduled in 2024.

"With this location selected and shovels ready, we are reshaping the future of steelmaking," U. S. Steel President and Chief Executive Officer David B. Burritt said in a prepared statement. "We had numerous competitive site options, but Osceola offers our customers incomparable advantages."

The selection highlights Mississippi County's continued rise as a steel-producing region. The industry, which also includes Nucor Steel, employs 3,000 people directly in the county. Another 1,200 are employed by steel-related businesses and suppliers, according to county economic development estimates.

"Mississippi County has become a national leader in steel production, and U. S. Steel's decision to create 'the steel mill of the future' in this community continues to underscore why," Arkansas Secretary of Commerce Mike Preston said in the release.

U.S. Steel is a relatively new player in the region. It announced in 2019 it was purchasing a 49.9% stake in the Big River Steel mill for $700 million. That operation began production in 2015 when it opened a $1.3 billion "flex mill" near Osceola that employs more than 500. About 15 months later, it announced plans for a $1.2 billion expansion.

"When completed, the sophisticated new steelmaking facility in combination with Big River Steel will form a 6.3 million ton mega mill capable of providing many of the most advanced and sustainable steels in North America," U.S. Steel said.

"The new ... lines currently under construction at Big River Steel will further advance U. S. Steel's ability to respond to customers' pressing supply chain needs to satisfy their own domestic manufacturing expansion."

The company cited the amenities in selecting northeast Arkansas over other locations under consideration, which included sites in Alabama and, according to some, also Mississippi.

Tuesday's announcement also was the culmination of several years of work by state and local economic development officials.

Even with the ideal location, Chitwood and others said the recent legislative enactment of a recycling tax credit law that would benefit U.S. Steel was key.

Its passage put Arkansas "in the driver's seat and keeps us there," Gov. Asa Hutchinson said last month after he signed identical bills to change the recycling tax credit law.

"Because of the location, we should have won it and we did win it," Chitwood said. "But we could have lost it. The Legislature did their part."

The company has several thousands acres under option, but Chitwood said he didn't know which options the company chose to exercise.

In a statement, Hutchinson praised the U.S. Steel decision to locate the facility in Arkansas, and, like Chitwood, credited the Legislature.

"The investment and high paying jobs that will result from this announcement will make a real difference in the lives of many families in Northeast Arkansas," he said in the release. "I am grateful for the support of the legislature which was critical in winning this expansion. Now, U. S. Steel is an important part of our future and we look forward to continued success in the coming years."

U.S. Steel's top executive said the plant will play an outsized role in the future success of the steel industry.

"Our nation and our customers need a robust and resilient supply chain to meet consumers' needs, and that starts with U. S. Steel's advanced, sustainable steels," CEO Burritt said. "Steel is critical to so much of what the world builds, so how we make our products contributes directly to a better, more sustainable world for all. This new facility will build that future."