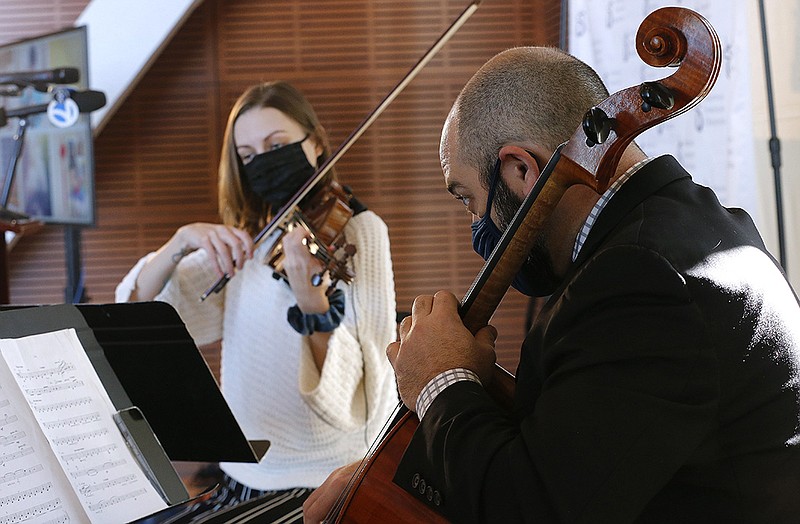 Charlotte Crosmer and David Gerstein perform with other members of the Arkansas Symphony Orchestra’s Quapaw String Quartet at the Clinton Presidential Center in Little Rock on Wednesday before the unveiling of plans for the new Stella Boyle Smith Music Center. (Arkansas Democrat-Gazette/Thomas Metthe)

The Arkansas Symphony Orchestra's quarters have become so cramped that its leaders don't feel they can function there much longer.

For the past quarter century, the orchestra has rented two floors of Byrne Hall at Little Rock's St. John Catholic Center, mostly offices on the upper floor, and on the lower floor, a large room with a fireplace that serves as rehearsal space for the youth orchestras and a former storeroom that has been converted into a multipurpose area.

With a couple of hundred music students from across the state crowding in most days of the week for lessons and rehearsals, things have become strained beyond the limit of what's tenable.

So Wednesday morning, the orchestra announced that it is planning a new state-of-the-art, 20,000-square-foot music center.

The $9 million Stella Boyle Smith Music Center, named for the orchestra's longest-standing and most generous patron, will be in Little Rock's East Village, between the Clinton Presidential Center and Heifer International.

The announcement primarily focused on the shift from private fundraising, which has brought in $5.4 million over two years, 60% of the expected total cost, to public fundraising to come up with the remainder. The orchestra is calling the capital campaign "Crescendo: Building for the Future."

[Video not showing up above? Click here to watch » arkansasonline.com/113symphony/]

Orchestra officials say once they have the money all in hand, they expect it to take 18 months from first shovel to completion.

The orchestra will sublease the land from Heifer International, and the location, near an off-ramp from Interstate 30, makes it more accessible to people traveling in from 33 other communities in the state.

Plans call for a large hall that will serve for rehearsals, recitals and small-ensemble concerts and would be able to seat up to 300; a number of practice spaces; music classrooms; climate-controlled instrument storage; and "additional flexible space to serve future generations of Arkansans," according to a news release.

The orchestra's education programs include the Sturgis Music Academy, which provides violin and cello instruction to more than 350 students from across the state, and the ASO Youth Ensembles Program, which has nearly 200 students enrolled in two full orchestras and a strings-only ensemble. The orchestra also operates a community orchestra for adult amateurs, which it took over a few years ago from the University of Arkansas at Little Rock.

"Right now, hundreds of students and adults come to create, learn and perform music in a building built in 1916 as a nunnery," Littlejohn said. (Actually, for most of its years, Byrne Hall served as the refectory for the campus in Little Rock's Pulaski Heights that is the headquarters for the diocese.)

"Children must rehearse and practice outside, in the storage room or in offices because of the high demand for music classes and the limited space in [the orchestra's] current facility," Littlejohn said. "The staff gets to hear every beginning violin player in the building. We can't grow at all."

The new center would allow the orchestra not only to meet current demand but to possibly expand music instruction offerings to include, perhaps, music theory and chamber music coaching, Littlejohn said.

However, orchestra concerts will still be at the Robinson Center.

"The new music center is not taking the place of the Performance Hall," Littlejohn said.

The building also will include a dedicated recording and streaming studio, something for which the pandemic has created a demand.

The orchestra streamed smaller-scale individual and ensemble performances from various spaces in Byrne Hall, including the enormously popular "Bedtime With Bach" series that went viral across the world. It also enabled the orchestra to keep its musicians employed and active while other organizations were having to shut down, and Littlejohn said it has given people a chance to get to know the orchestra's musicians on a more personal level.

Among other things, the studio will provide access to the orchestra's music and educational resources to Arkansans in nursing homes, retirement centers, libraries, schools "or anyone who cannot come to the community music center in person," according to the news release. Streaming during the pandemic also made it possible to extend the orchestra's school concerts to more than 26,000 children in more than 200 schools who might, pre-pandemic, have had to travel to Little Rock or Hot Springs to hear the concerts in person.

Stella Boyle Smith Trust trustee Mike Mayton said Smith, who died in 1994 at the age of 100, would be proud to have her name on the new music center. She started what eventually became the orchestra in her Hillcrest living room in 1923 and always envisioned its primary function as promoting music education, he said.

"This is exactly what the orchestra has been looking for all these years," said Geoffrey Robson, who has served as the orchestra's artistic director while it searches for a full-time music director.

Robson, who also has been conducting the orchestra's youth ensembles, says he has consulted with the team, including Little Rock architects Witsell Evans Rasco, in terms of having the new music center fulfill "what our greatest needs are." He expects the new facility to be a "destination for the arts" in Central Arkansas.

"We are a hub for music education from every corner of the state," he said at Wednesday's announcement.

In addition to serving the needs of students, the large hall could be used for chamber music concerts and/or a secondary recital space for musicians who go in to solo with the orchestra, a venue for late-night performances, receptions and mixed social/performance events. However, he said, it probably won't become the main performance space for the orchestra's River Rhapsody chamber concerts, which have taken place in the Great Hall of the Clinton Center.

"This project will become an incredible addition to the arts and culture landscape of Arkansas and a vibrant jewel of creativity in Little Rock's East Village," said Brigita Gardner, board member, donor and chairwoman of the fundraising effort.

"I started out on the feasibility committee and ended up chairing the fundraising arm," explained Gardner, who has been on and off the board since 1997.

Fundraising for the center is separate from what the orchestra raises for its annual operations. Its $3.5 million annual budget goes to pay 12 full-time musicians, more than 70 part-time musicians and 15 administrative staff members, and it has been balanced for a dozen years.

The new facility also will provide new space for the orchestra's administrative offices, which at one point had been slated to move to a space on Little Rock's Main Street, where it would have formed, with its neighbors Ballet Arkansas and the Arkansas Repertory Theatre, what the city trumpeted as "the Creative Corridor."

"The space wasn't working," Gardner said. Among other issues, tap dancers in an upstairs studio and a faulty electrical box made it ultimately untenable, she said.

That prompted a five-year search for someplace that was more suited to the organization's needs, which would have included considerable alterations for better acoustics. Eventually it became evident that it would be easier and no more expensive to build from scratch as to buy and renovate an existing facility.

Gardner said the orchestra board is determined to have the complete sum -- $9 million to build the facility and another $1 million in an endowment to run and maintain it -- in hand before starting construction.

Gardner said the goal is to have the center complete by July 2023.

"It's not like we're building the Taj Mahal," she said. "We're being responsible."

With $5.4 million in cash and pledges in the coffers, the next phase of the project will require support directly from the communities it serves, orchestra officials say. The orchestra is setting up a website, arkansassymphony.org/music-center, with information and providing a way to donate.

Gardner said board members contributed or raised $3.2 million of the total, which proves "we've got a committed board -- and an engaged board."

"We are proud to support the construction of the Stella Boyle Smith Music Center because we know the impact it has on the lives of our youth and our communities both now and for our future," said Chris White, orchestra board member and executive vice president and Arkansas Community Division president of Simmons Bank, which donated $500,000 toward the project. The education suite will bear the bank's name.

Board member Dr. Teresita Angtuaco, a diagnostic ultrasound radiologist at the University of Arkansas for Medical Sciences, saw the success of her three granddaughters in symphony education programs as a motivating factor in supporting music education. (All three studied violin and piano until one of them, under the influence of an uncle who played in a band in Texas, switched to the trombone.)

"That's the message that most of us on the board feel." 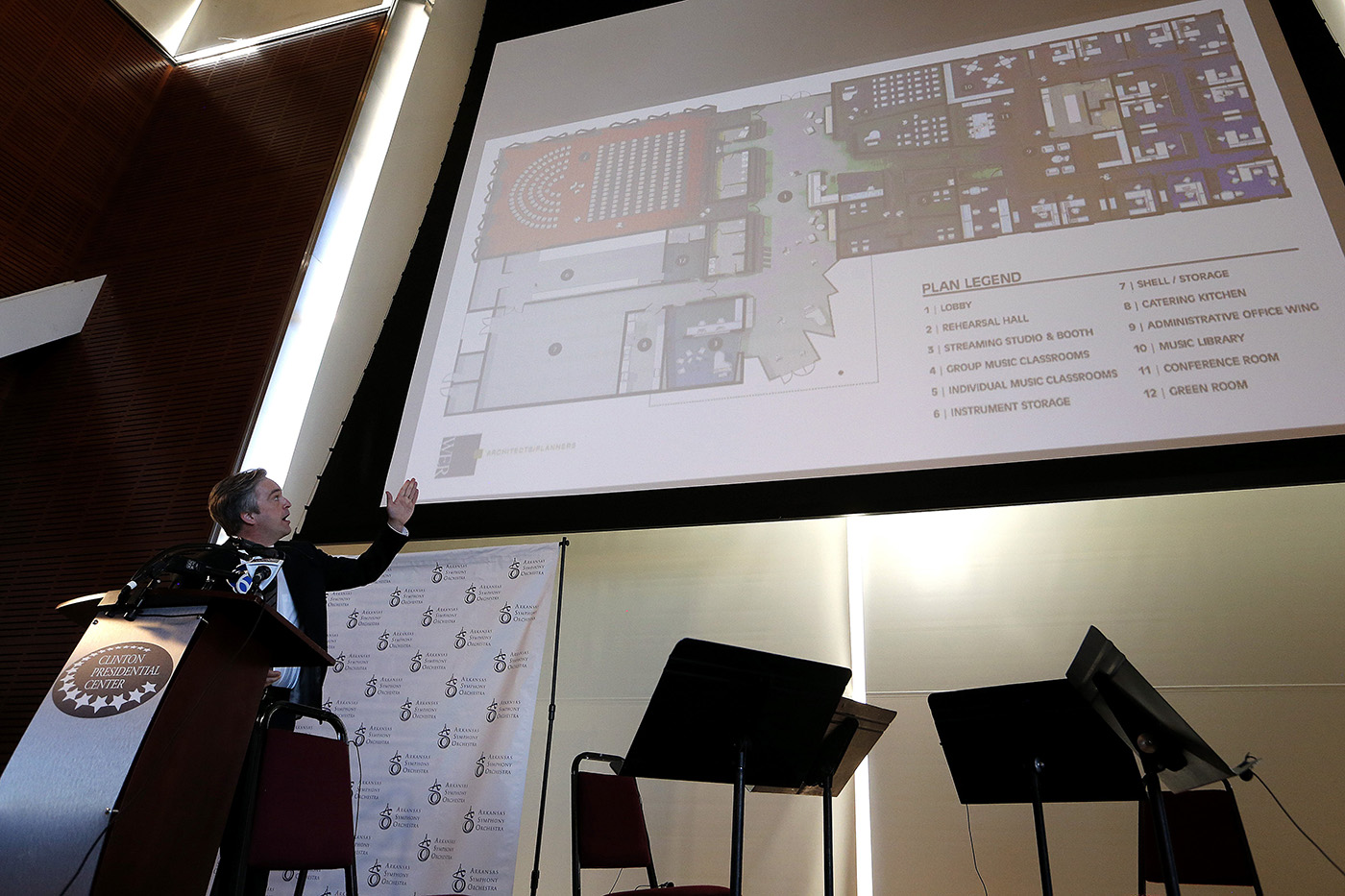 Geoff Robson, artistic director of the Arkansas Symphony Orchestra, explains the layout of the $9 million Stella Boyle Smith Music Center on Wednesday at the Clinton Presidential Center. “This is exactly what the orchestra has been looking for all these years,” Robson said, adding that the new complex will be a “destination for the arts” in Central Arkansas. (Arkansas Democrat-Gazette/Thomas Metthe) 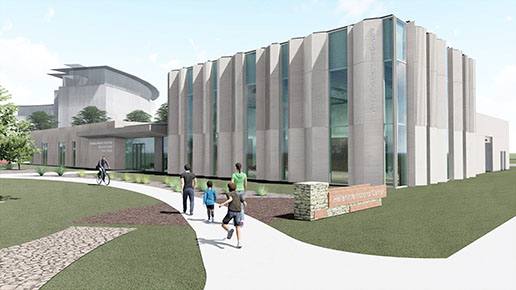 The Arkansas Symphony Orchestra’s state-of-the-art, 20,000-square-foot Stella Boyle Smith Music Center will be built in Little Rock’s East Village between the Clinton Presidential Center and Heifer International. Architects Witsell Evans Rasco have drawn up sketches of the exterior and interior. (Special to the Democrat-Gazette) 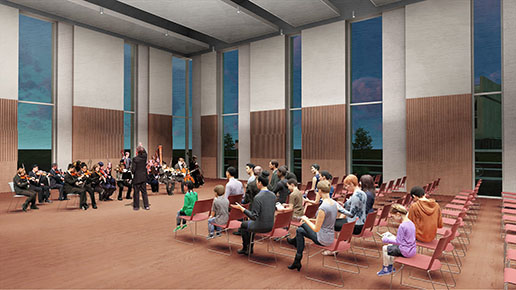 This architectural sketch offers an interior view of the Stella Boyle Smith Music Center. Plans call for a large hall that will serve for rehearsals, recitals and small-ensemble concerts, and would be able to seat up to 300 people; a number of practice spaces; music classrooms; climate-controlled instrument storage; and “additional flexible space to serve future generations of Arkansans,” according to a news release. (Special to the Democrat-Gazette)