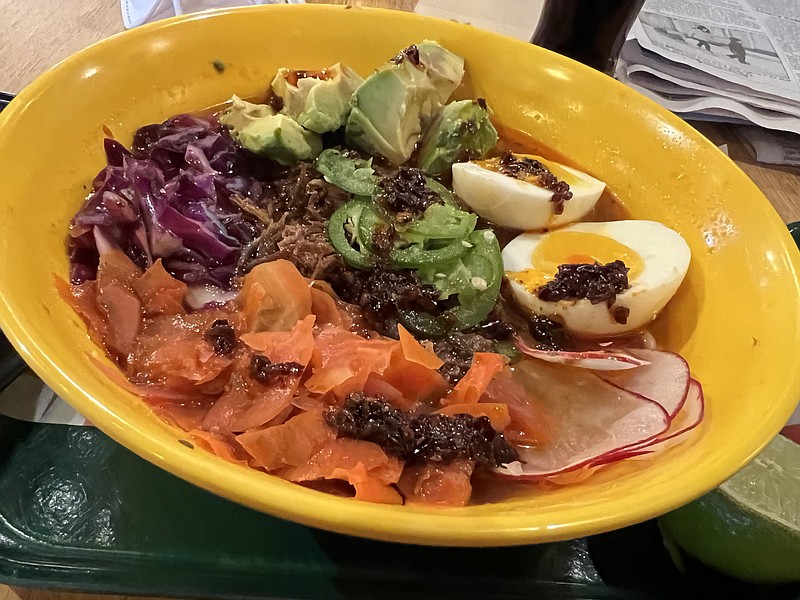 Camp Taco's Mexican Ramen was the equal of any Asian ramen we've had in the area. (Arkansas Democrat-Gazette/Eric E. Harrison)

Let us start out by saying that the food, the beer and service were all good at Camp Taco.

But — particularly in a location that failed to support two previous brewpubs — what are the long-term survival prospects in this market for yet another place that serves high-priced street tacos, albeit in a convivial, but noisy, atmosphere?

It's but a block or so from Yellow Rocket's Lost Forty, also a brewpub, which in one positive aspect does allow for a broader spread of available brews in the neighborhood — what pours from some of Camp Taco's dozen taps come from its own kettles, some from Lost Forty. 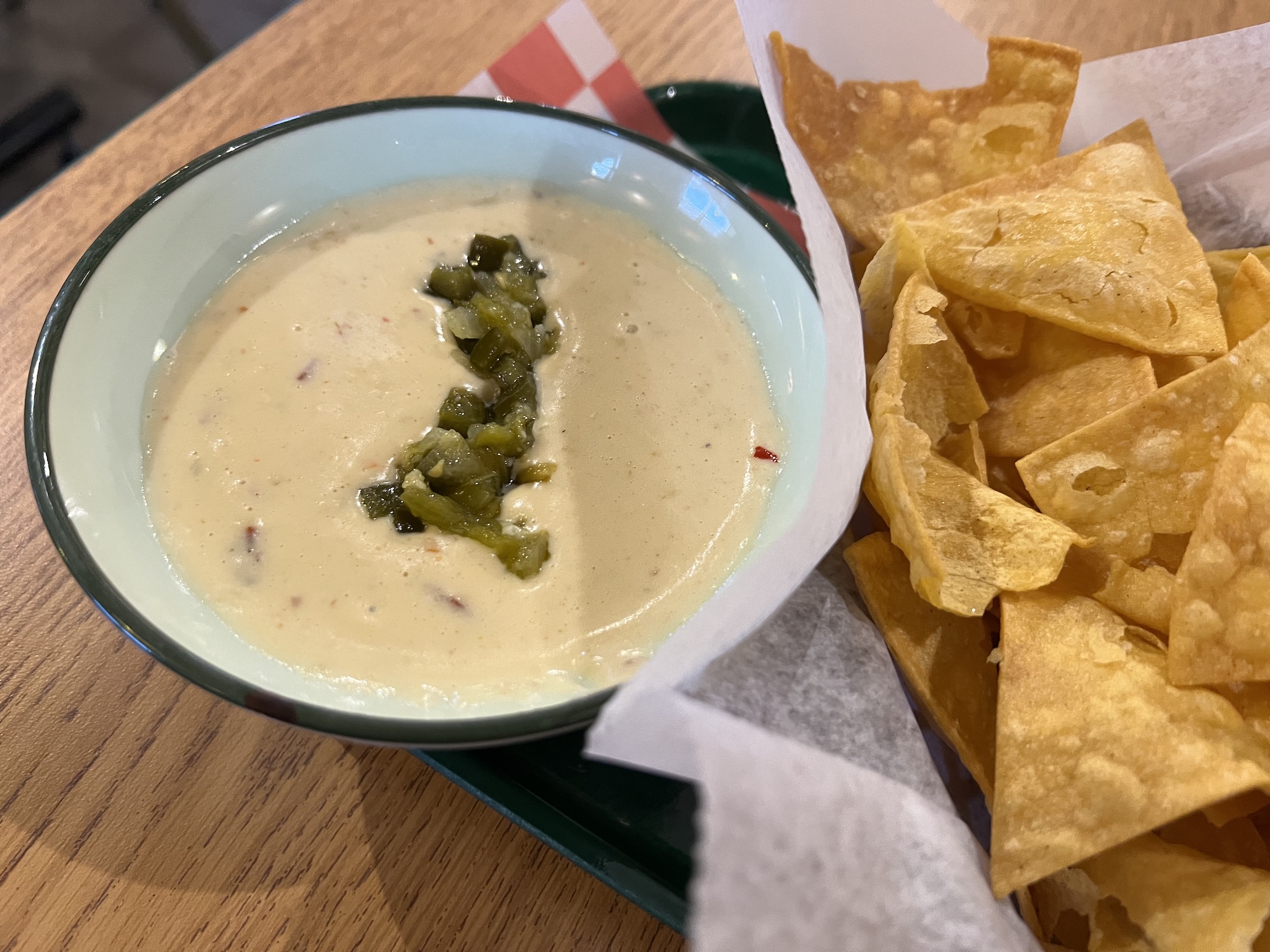 The White Poblano Cheese Dip at Camp Taco is big enough to serve two. (Arkansas Democrat-Gazette/Eric E. Harrison)
For several weeks after it opened, it was nearly impossible to get in, even at what in most places would have been off-peak hours; if you got a place to park closer than a block away, it was a coup. Now that the three-month, new-restaurant honeymoon has passed, we had no trouble getting seated. Of course, single diners are automatically steered toward the bar, whether or not there were available tables — even on a Sunday afternoon when the place was practically empty.

We never quite made it to Sixth Street Brewing — it didn't last very long — so we can't tell you what of the current decor is held over, but the conceit is that you're at some kind of sleep-away camp ("Check in with your counselor," says the sign out front). Servers, etc., all wear T-shirts with "Camp Taco at Lost Forty" on the front and either "Happy Camper" or "Staff" on the back. (What's the differentiation? Maybe the staff knows; we sure don't.)

There are three dining areas; the middle one includes the long bar (backed with dark green subway tiles and a clock that you shouldn't count on for the correct time because it appears to run backward) and fronts on the brewery equipment. A front dining room is wood-paneled and lighted with Tiffany-style light fixtures with an actual disco ball; there's also a screened-in patio. The soundtrack is '60s-'70s pop-rock. Your check comes in the library pocket of a young-adult or children's book (ours was via one of the "Goosebumps" volumes), just as though it had been checked out of the camp library.

The taco plates — two upscale tacos, two sides — range in price from $11.50 to $14.50. The flour and corn tortillas are house-made. The ingredients are certainly, visibly and taste-ably upscale. 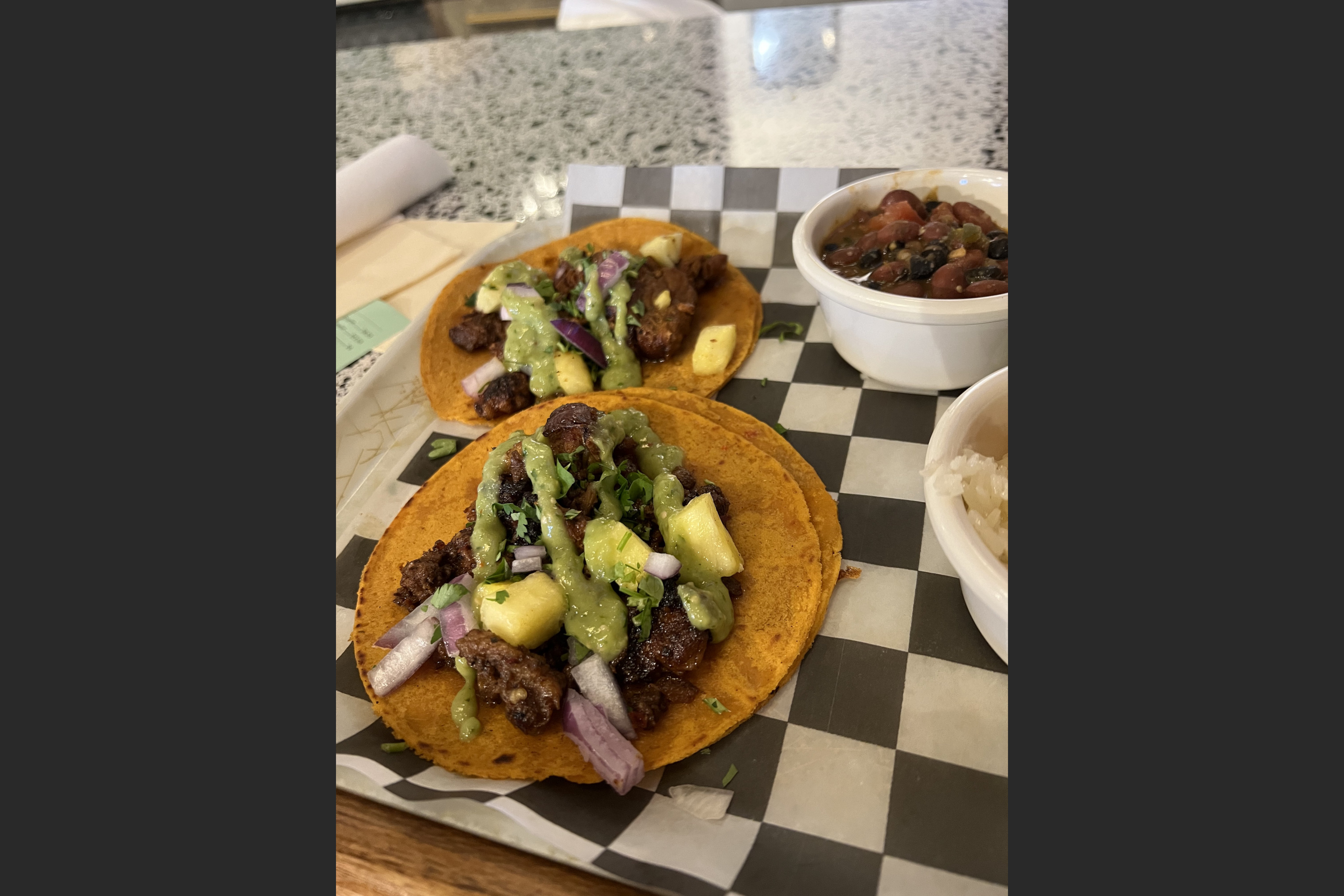 Pastor Classico featured two classic al pastor tacos, a rice medley and Frijoles Mixtos. (Arkansas Democrat-Gazette/Eric E. Harrison)
We remind you that we enjoyed what we ate, but you can get decent to fantastic street tacos from Mexican restaurants or food trucks for half that, or less.

For example, our Pastor Classico ($13), two tacos al pastor (marinated grilled pork shoulder with pineapple, onion and cilantro on corn tortillas) with green salsa and lime on the side. Yes, it came with two upscale sides — a small portion of Frijoles Mixtos, a blend of black, red and white beans and green lentils in a somewhat spicy broth; and a Rice Medley — jasmine rice with diced carrots, peas, corn, poblano peppers and onions. Would we rate it worth $8 more than a pair of al pastor street tacos from any nearby taco truck? Probably not.

Our two Quesabirria tacos ($14) — deep-fried in corn tortillas topped with slow-braised beef, jack cheese, a poblano pepper pico with a spicy chili-lime broth (also some in a side cup for dipping), were indeed delicious, but also awash in oil — was not just the oiliest quesabirria we've had, but quite the oiliest tacos of our experience, so much oil that it pooled in the red-and-white-check paper lining the plastic tray and so that we went through a stack of napkins and still had to visit the restroom (styled "Men's Latrine" in keeping with the camp vibe) to wash the remainder off our hands.

We did find one supremely redeeming menu item that made our most recent visit worthwhile and would induce us to return: the Mexican Ramen ($13.50 for the "birria style" with slow-braised beef, $12.50 for the veggie version, topped with "adobo 'shrooms") — ramen noodles topped with birria, purple slaw, fresh avocado, radish slices and pickled carrot, plus two halves of a soft-boiled egg garnished with a "chili flake crunch" in a spicy, but not too spicy, chili-lime broth. We'd put this up against any Asian ramen in the neighborhood for flavor and filling-ness (if that's a word). 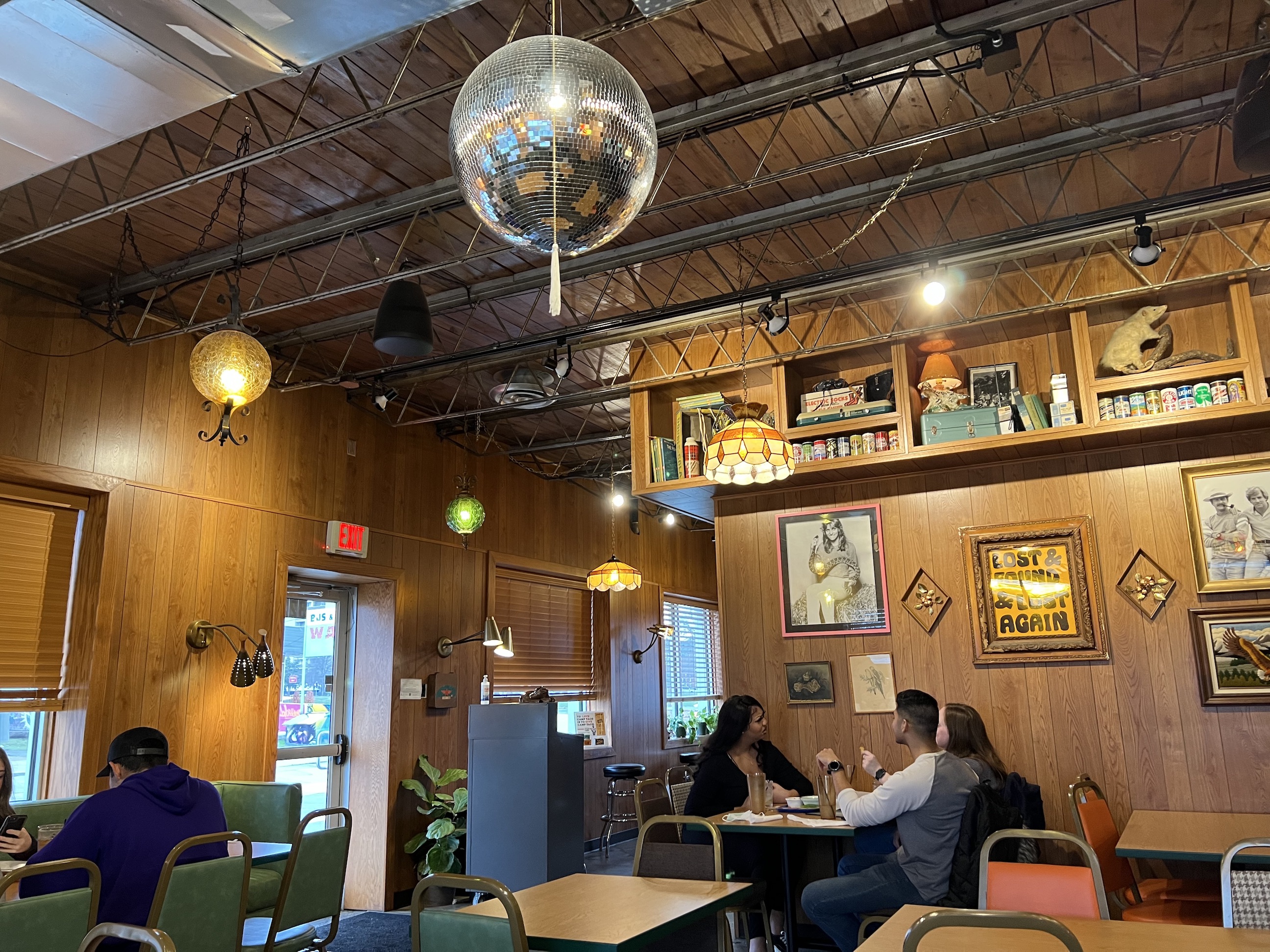 The decor in Camp Taco's front dining room actually includes a working disco ball. (Arkansas Democrat-Gazette/Eric E. Harrison)
And we can recommend the White Poblano Cheese Dip ($7.50, and big enough to serve two), although it didn't have much flavor until we stirred in the chopped poblano pepper pico. It comes with a big pile of puffy house-made chips, some of which weren't quite thick enough to stand up to the flour-based dip.

We felt, as this is a brewpub, that we ought to sample one of the brews, so we opted for the "Bottom Bunk" Dry Stout ($7.25 on draft, but only $6.50 for a 32-ounce growler), a pleasant light stout with a relatively low alcohol content (4.2% ABV) in a long, tall glass that matched up very nicely with the ramen.

We mentioned that we got good service, and we did, from the bartender on the first occasion and from servers subsequently — friendly, helpful and prompt. We did have to ask our busy server for the extra napkins for our oily quesabirria.