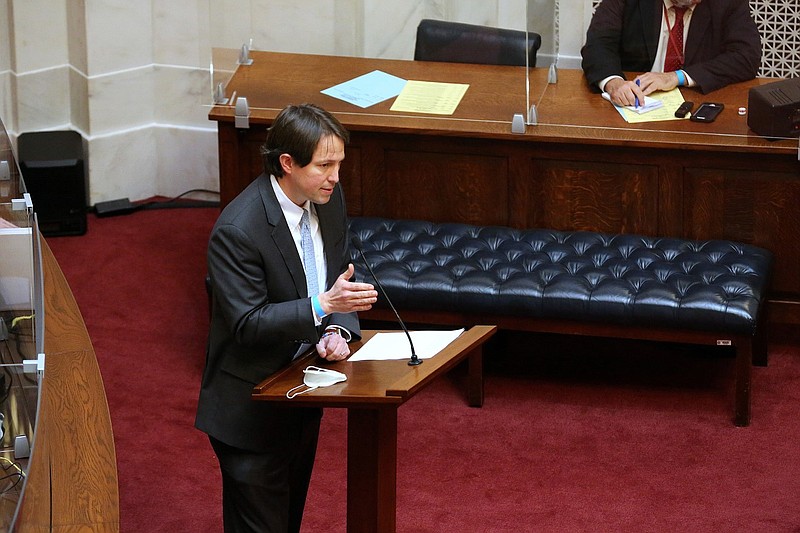 The cafeteria at the state Capitol closed Wednesday for the rest of this week because of covid-19 cases, and state Sen. Clarke Tucker, D-Little Rock, said Wednesday that he tested positive for the virus.

These reports of spread of the virus came on the second day of legislative budget hearings in the Multi-Agency Complex immediately west of the state Capitol.

The Legislative Council and Joint Budget Committee on Tuesday voted to strip covid-related provisions, such as a requirement for lawmakers to wear masks except under certain circumstances, out of their rules.

The hearings for state agency budgets are being held in advance of the fiscal session starting Feb. 14.

Lawmakers on Tuesday quizzed officials of the state departments of corrections and health about their proposed general revenue budgets for the next fiscal year, a day after they queried officials of the Division of Higher Education about the budgets for colleges and universities, and Gov. Asa Hutchinson formally proposed his general revenue budget for fiscal 2023, which begins July 1.

The Legislative Budget Committee co-chairmen, Sen. Jonathan Dismang, R-Searcy, and Rep. Lane Jean, R-Magnolia, said lawmakers could wrap up the hearings a day or two early next week if the spread of covid-19 requires such a move.

The cafeteria, in the basement of the state Capitol, closed Wednesday for the rest of this week because several cafeteria staff members are out sick with the coronavirus, said Kevin Niehaus, a spokesman for the Secretary of State John Thurston.

Tucker said in an interview that he didn't attend Tuesday's budget hearing because he felt bad, and it was safer for him to stay away and get tested the same day. He said he learned Wednesday that he tested positive for the coronavirus.

He said he feels like he has the flu. He said he doesn't know how he caught the coronavirus, but he believes it was almost inevitable that he would test positive for covid-19 because the omicron variant is omnipresent. He said he was as careful as he could be.

"In spite of my imperfect, but best efforts, one of those cases is me," Tucker tweeted Wednesday, referring to the state's record 10,974 new covid cases.

"I've been pretty sick this week and don't want to think about what it would have been like if I hadn't received both vaccines and a booster."

Senate President Pro Tempore Jimmy Hickey, R-Texarkana, said Wednesday that he also knows of another senator who may have been exposed to covid-19. That person has decided not to attend the budget hearings for a few days as a precaution, he said.

He said he's "not at liberty to" disclose the senator's identify.

More than 30 state lawmakers have reported testing positive for covid-19 since the first case in Arkansas was announced in March 2020.

In October 2020, legislative leaders suspended budget hearings for a week after three lawmakers tested positive for covid-19 in advance of the regular legislative session in early 2021.

At the start of those budget hearings, the Legislative Council and the Joint Budget Committee approved rules to require lawmakers to wear masks, except under certain conditions, in order to participate in budget hearings. That action came after lawmakers defeated an attempt to remove coronavirus-related requirements with lawmakers surrounded by plastic-glass barriers on three sides in their seats in the Multi-Agency Complex.

In late March 2021, the Senate and House voted to suspend their temporary rules approved at the start of the regular session that had required lawmakers, staffers and members of the public in their facilities to wear masks or other cloth coverings over their mouths and noses under most circumstances.

That action came on the same day that Hutchinson lifted the statewide mask mandate and extended eligibility for coronavirus vaccines to all residents age 16 and older.